CNN has said that former FBI director Comey plans to testify that US President Trump pressured him to drop an investigation into former national security adviser Flynn's Russia ties. The hearing is set for June 8. 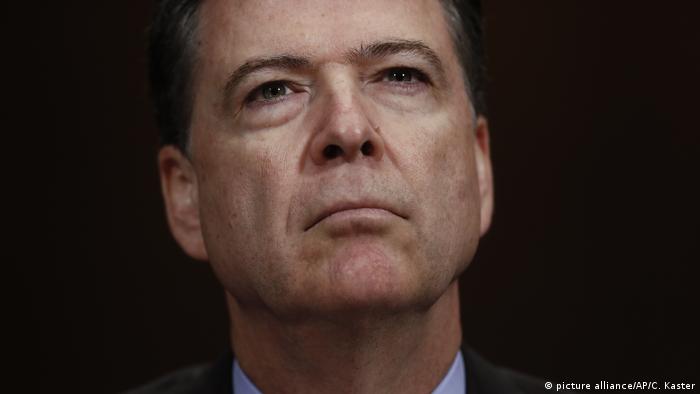 Former FBI director James Comey will testify before a Senate committee on June 8 as part of the probe into alleged Russian meddling in the US presidential election.

Comey was sacked by US President Donald Trump in May.

Earlier this month, Virginia Senator Mark Warner, a leading lawmaker of the opposition Democrats, said that Comey had declined an invitation to discuss an investigation into Trump's campaign and Russia before the Senate Intelligence Committee.

Trump had surprisingly fired Comey, who was charged with investigating the Trump campaign's ties with Russia, in a move that set off shockwaves in Washington amid concerns of a cover-up.

Comey, 56, was nominated by former President Barack Obama for the FBI post in 2013 to a 10-year term. Comey has spent three decades in law enforcement.

It was only the second time in the US history that a president fired the head of the FBI. The first occurred in 1993, when then-President Bill Clinton dismissed William Sessions over alleged ethical lapses.

Later on Wednesday, the House of Representatives intelligence committee, which is leading its own probe into alleged collusion between Russia and the Trump campaign, said it had subpoenaed Flynn and Trump's personal attorney, Michael Cohen.

"As part of our ongoing investigation into Russian active measures during the 2016 campaign, today we approved subpoenas for several individuals for testimony, personal documents and business records," Representatives Mike Conaway and Adam Schiff said in a statement. "We hope and expect that anyone called to testify or provide documents will comply with that request."

Each of the two men's private firms, Flynn Intel Llc, and Michael D. Cohen and Associates PC, had also been subpoenaed, the statement said.

Flynn was forced to resign from his post in US President Donald Trump's cabinet in February following reports that he had lied to top officials, including Vice President Mike Pence, about the nature of his contacts with Russian diplomats. Later evidence showed that he had also received payments from Russian and Turkish interests.

Last week, Flynn refused produce documents after he was subpoenaed by the Senate Intelligence Committee, citing the Fifth Amendment. However, recent reports suggest that he could be prepared to hand over some of the document subpoenaed by the panel.

Cohen, meanwhile, is alleged to have been involved in trying to create a back-channel between the US and Russia, according to the New York Times newspaper. Had the plan come to fruition, it would have involved a peace agreement between Russia and Ukraine, as well as the lifting of US sanctions against Kremlin officials, the newspaper reported back in February.

Trump urged lawmakers on Wednesday to allow one of his former advisers, Carter Page, to counter-testify against the directors of the FBI and CIA.

The US president has been dismissive of several inquiries by the FBI and several congressional panels into Russia's alleged meddling in the 2016 presidential election.

"So now it is reported that the Democrats, who have excoriated Carter Page about Russia, don't want him to testify. He blows away their case against him & now wants to clear his name by showing 'the false or misleading testimony by James Comey, John Brennan...' Witch Hunt!" Trump wrote on Twitter, referring to the former directors of the FBI and CIA.

How to watch the final Trump-Biden debate tonight 2h ago