World reacts to US withdrawal from Paris agreement

World leaders have vowed to press on with the Paris climate deal without the United States. Many US businesses, cities and states also said they would act together to combat climate change. 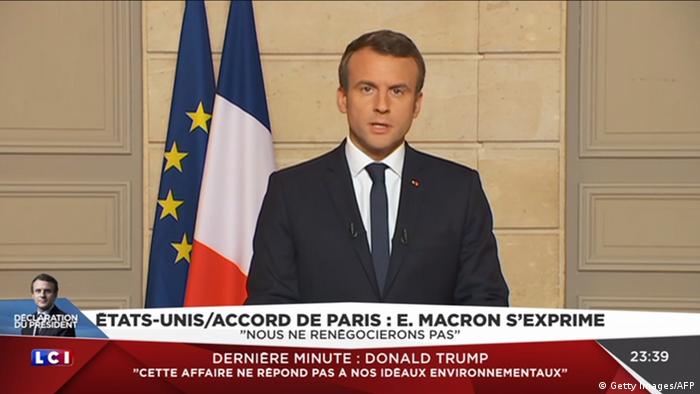 World leaders condemned President Donald Trump's decision on Thursday to pull out of the Paris agreement on climate change, saying the decision is likely to damage relations with US partners across the globe.

Trump said he was pulling out of the landmark global agreement to put "America first" because it was too costly, but that he would consider renegotiating what he called a bad deal.

France, Germany, Italy then issued a joint statement saying the Paris agreement could not be renegotiated.

"We deem the momentum generated in Paris in December 2015 irreversible and we firmly believe that the Paris Agreement cannot be renegotiated, since it is a vital instrument for our planet, societies and economies," the leaders of the three countries said in a joint statement.

French President Emmanuel Macron appeared to mock Trump's "Make America Great Again" slogan, tweeting "Make Our Planet Great Again." He also posted an appeal in English offering scientists and engineers the chance to continue climate change work outside the US. "France will not give up the fight," he said.

Anne Hidalgo, mayor of the city where the deal was agreed, said the decision was "a mistake that would have dramatic consequences."

"That incredible diplomatic achievement could not have been secured without the decisive role of the United States of America. That is why President Trump is committing a mistake with dramatic and fatal consequences," Paris' mayor said.

The bloc "deeply regrets the unilateral decision by the Trump administration," Arias Canete wrote in a statement, but he vowed "the world can continue to count on Europe for global leadership."

European Commission President Jean-Claude Juncker slammed the US climate decision as "seriously wrong." Juncker also expressed doubt that Trump would be able to extricate the US from its existing Paris commitments before the next presidential elections.

The EU Commission said it will now seek new alliances in the fight against climate change.

Read: How Trump's unreliability is pushing EU and China closer together

German Chancellor Angela Merkel expressed disappointment via her spokesman Steffen Seibert, saying "now more than ever we will work for global climate policies that save our planet."

A group of leading Social Democrats, including Foreign Minister Sigmar Gabriel, issued a joint statement saying that the US was "harming itself and all other peoples of the world" with this move.

"For those who deny climate change and do not combat it will not only have to deal with ever worsening storms, droughts and floods, this 'without me' strategy also prevents economic growth and technological progress," said the signatories, who included Environment Minister Barbara Hendricks and Economy Minister Birgitte Zypries.

Meanwhile, the German arm of environmental activists Greenpeace got creative at the US embassy in Berlin, projecting Trump's silhouette and the words "#TotalLoser, so sad!" on the walls of the building, mimicking some of Trump's own preferred phrases. 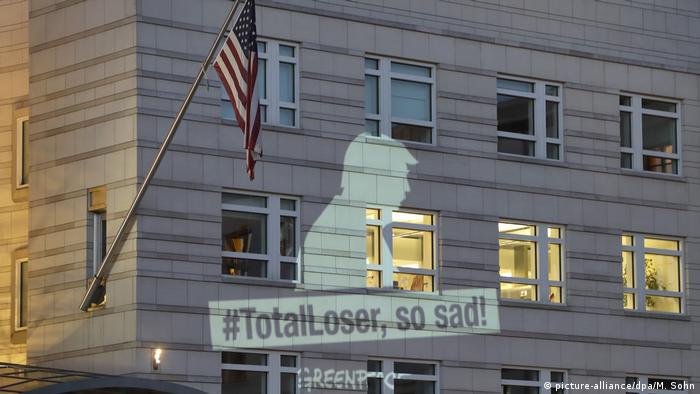 Former US President Barack Obama said the Trump administration was joining "a small handful of nations that reject the future" by withdrawing from the pact.

Obama, whose administration negotiated the agreement, said the countries that remain in the Paris deal will "reap the benefits in "jobs and industries created," and that the US should be "at the front of the pack." Hillary Clinton, meanwhile, called the decision a "historic mistake."

US businesses, cities and states were also critical of Trump's move, with several vowing to take action into their own hands to meet commitments under the Paris agreement.  Tesla CEO Elon Musk announced that he would cease his work as an adviser for the Trump administration.

General Electric CEO Jeff Immelt also expressed disappointment and called on businesses to fill the void left by the US government's withdrawal.

Read: US businesses at odds with Trump pullout from Paris accord

Russia, which is yet to ratify the Paris Accord on account of still waiting to iron out some of its finer points, meanwhile said that Trump's decision to pull the US out of the agreement would not affect Russia's participation.

"We made the decision to join, and I don't think we will (change) it," Russian Deputy Prime Minister Arkady Dvorkovich said Friday. Russian President Vladimir Putin hit a more lighthearted tone on the issue, commenting "Don't worry, be happy," adding that he thought there was still time to reach an agreement on the landmark 2015 Paris climate change deal despite Washington's exit.

"You shouldn't make a noise about this, but should create the conditions for joint work," Putin said, adding that he "would not judge" Trump over his decision.

Russian agency RIA reported that Kremlin aide Andrei Belousov had described the Paris deal as not viable without US participation.

A Chinese foreign ministry spokesperson told reporters that standing firm on the Paris deal was a "responsibility shouldered by China as a responsible major country" and added that the country would "earnestly implement" their obligations.

"We think the Paris accord reflects the widest agreement of the international community with regards to climate change, and parties should cherish this hard-won outcome," Hua Chunying said. Hua added that China wants to strengthen cooperation with various partners to move the Paris article negotiations forward.

He also added that - despite Trump's withdrawal from the Paris pact - China was still open to working with the US to promote sustainable climate developments.

Mexican President Enrique Pena Nieto tweeted that "Mexico maintains its support and commitment to the Paris Accord to stop the effects of global climate change."

Japanese Foreign Minister Fumio Kishida called Trump's move "regrettable" because "Japan was hoping to work with the United States within the framework of the Paris agreement."