Despite COVID, Christmas in Bethlehem brings back joy in troubling times | Middle East | News and analysis of events in the Arab world | DW | 21.12.2021

Despite COVID, Christmas in Bethlehem brings back joy in troubling times

Christmas in Bethlehem is usually a festive and colorful season. This year, festivities in the Palestinian town are set to return — but the COVID pandemic is still casting a shadow on the celebrations.

Bagpipes, trumpets and drums can be heard from far away. It's early evening here in Beit Sahour, a small town close to Bethlehem in the occupied West Bank. Young Palestinian musicians from one of the local Scout groups are practicing their formations on the sports field near the Evangelical Lutheran Church in the predominantly Christian city.

"This year, we have been training hard. Most members have been practicing almost daily for the march and to partake in the Christmas festivities," says Dafer Kassis, leader of the church Scout troop.

Led by the bagpipe players — a musical tradition dating back to the British mandate at the beginning of the 20th century — the musicians twirl their sticks and play Christmas classics like "Jingle Bells" and popular carols.

"Last year, like in so many other places around the world, we couldn't celebrate Christmas properly. That's why we're really looking forward to it now and hope that this time everything will take place on December 24 as planned," says Kassis. 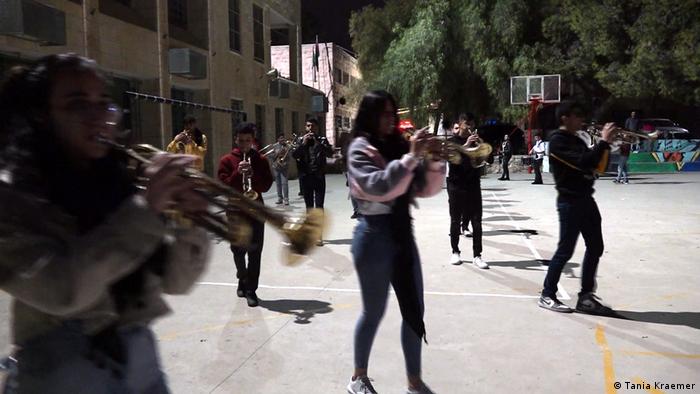 Christmas parades are back

Palestinian Scouts and their bands are an essential part of the colorful Christmas festivities in Bethlehem.

The parade traditionally starts on the morning of December 24, as Scout troops from all over the area march toward Manger Square. Festivities run throughout the day until the traditional midnight Mass at the Church of the Nativity, revered by the faithful as the birthplace of Jesus.

But with less than a week to go until Christmas, it remains unclear whether authorities will tighten COVID-19 restrictions and scale back the festivities, like last year.

Bethlehem, which is separated from neighboring Jerusalem by a concrete barrier, celebrates Christmas several times to accommodate the calendars of different Christian denominations. Commemorations for Christ's birth start on December 24 for Catholic and Protestant Christians. On January 7, the Orthodox churches celebrate, followed by the Armenian community.

Despite an ongoing vaccination campaign in the occupied Palestinian Territories, the sudden emergence of the coronavirus omicron variant has thwarted preparations by the municipality of Bethlehem to welcome tourists this year. 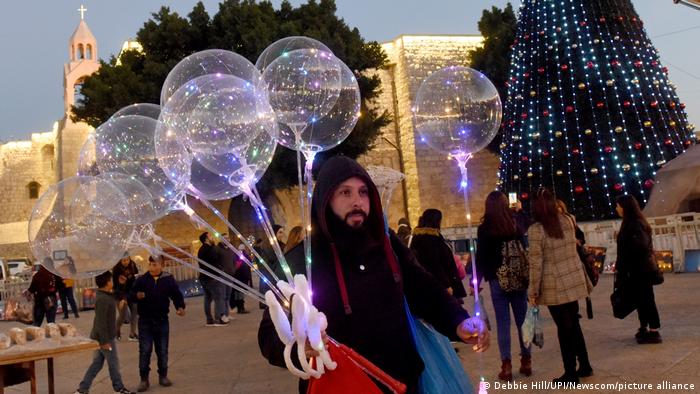 This has been another difficult year for Bethlehem residents, many of whom are dependent on tourism

Israel reopened its borders on November 1, only to close them again a month later to curb the spread of the new variant — just ahead of the Jewish holiday of Hanukkah and the beginning of the Christmas season. Only a few tourist groups have visited in recent months. Tourists could not travel to the West Bank, either.

"People felt a little bit more hopeful, but after that [the closure] there won't be many tourists," says Elias Halabi, a young Palestinian photographer, standing in front of the big Christmas tree which overlooks Manger Square.

"People are feeling a bit down again, but then we are still in the spirit of Christmas."

Every year, Halabi takes photos of the event, every time from a different angle in the city. "We don't always have the nicest tree in Bethlehem, but we have the Nativity Church and this is what makes it special," he said.

Arab Israelis and Palestinians from other parts of the West Bank are expected to visit the city to celebrate the season, along with some Christians from Gaza with special Israeli permits. 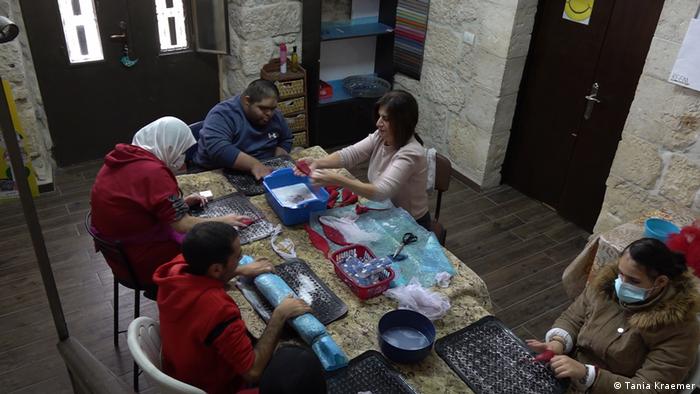 This local center, which supports itself selling ornaments, nativity sets and other gift items, has been hard hit by COVID

Overall, 2021 has been another difficult year for Bethlehem and its residents, many of whom are very dependent on tourism.

"It affected us all really hard, whether it be the small handicraft business, small guesthouses or big hotels," says Mahera Nassar Ghareeb, a director of a center for intellectually disabled people, located just a few steps away from the Church of the Nativity.

The center supports itself partly by selling ornaments, nativity sets and other gift items made from felted sheep's wool by the young women and men who come to the charity during the day. "But we want to be optimistic, that there will be an end to the virus at some point," adds Ghareeb. 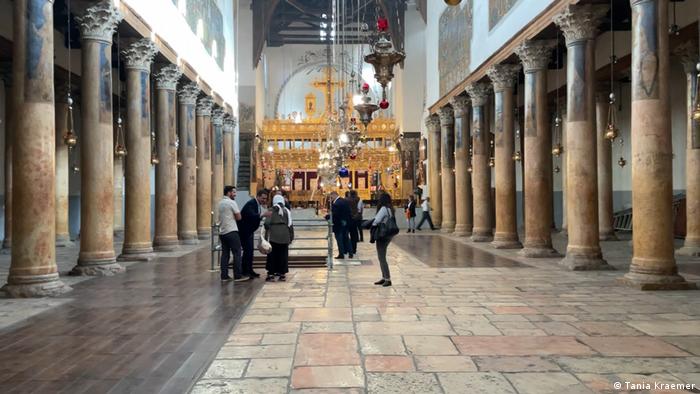 As in 2020, visitors to the newly renovated Church of the Nativity will find themselves with plenty of space to reflect

Renovated church, but not many visitors

At the heart of the celebrations is the Church of the Nativity, which has welcomed visitors from all over the world for centuries.

"Despite the bad news of the omicron variant of COVID-19, we hope that it will be possible for the pilgrims to come back and to celebrate together with the local Christians," says Brother Francesco Patton, the custodian of the Franciscan order in the Holy Land.

Over the past decade, the church has undergone a massive restoration, but the pandemic has made things much quieter. There are no lines these days to enter the grotto where a silver star marks the place where Jesus is believed to have been born.

Just outside, on Manger Square, the Christmas tree and its Nativity scene has once again become the center of attention with families and friends snapping photos and selfies. 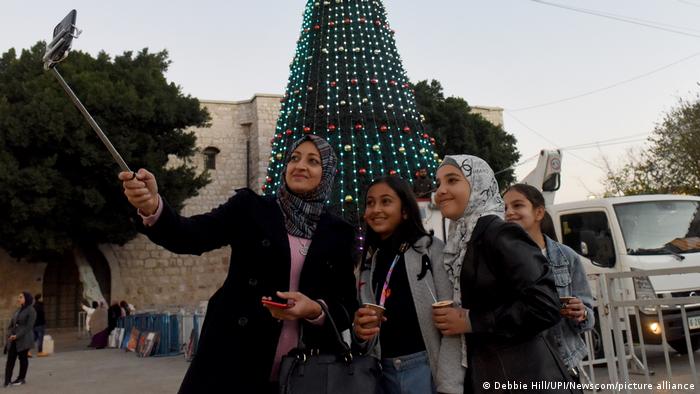 Despite the increased restrictions, locals have still come out to enjoy the festivities

"The Christmas season for me is a season of hope — even without facing everything we faced this year with the coronavirus, there have been many other problems over the years," says photographer Elias Halabi, referring to the overall conflict situation in the area.

"But still with everything that is around us here, the tree lighting, the Nativity Church, just being in Bethlehem is something so special in itself, this is what is hopeful for us and brings us joy."

Tensions between Israelis and Palestinians have been running high in recent days. Israeli forces have carried out fresh raids in the West Bank after a spate of recent deadly attacks.