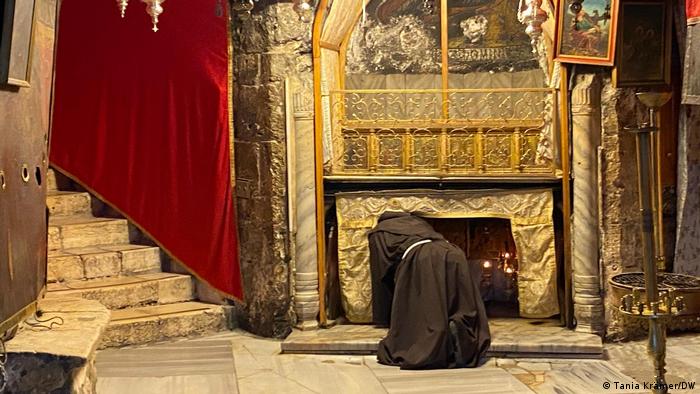 Christmas in Bethlehem won't be canceled, but it will be significantly curtailed. Only the large Christmas tree overlooking Manger square and its wooden nativity scene appear as reminders that Christmas is just a few days away. The square in front of the Church of Nativity, where Jesus was born, is quiet during what is usually the busiest time of the year for this Palestinian town.

Some local residents snap selfies with the tree in the background, and a few mobile vendors offer hot beverages on this mild December morning. What's missing are the large numbers of foreign and local tourists who would normally be visiting the Church of the Nativity this season.

It has been a difficult year for Bethlehem and its residents, who are largely dependent on tourism. Nadeen Baboun and Christine Najarian ran food tours ("Farayek") where tourists could visit locals and experience Bethlehem through its food traditions. But in March, all the tours had to be canceled when Bethlehem became the first town in the West Bank to be put under lockdown by the Palestinian authorities because of a COVID-19 outbreak.

"Right from the beginning, we already knew that there were going to be lockdowns and tourists weren't permitted to come anymore. The situation became very unpredictable and uncertain," Nadeen Baboun tells DW via Zoom. Early on in the pandemic, Israel had closed its borders to foreigners, which meant travel to the Palestinian Territories was banned too. Arab Israelis and Palestinians from other parts of the West Bank have mostly not been able to visit Bethlehem for the Christmas season either.

While the two young entrepreneurs are hoping for a better season next year, they are now solely focused on spending this Christmas safely with their families. "We usually come to Bethlehem on the 24th to celebrate and go out for lunch afterwards," says Christine Najarian. The Armenian-Christian from East-Jerusalem celebrates Christmas several times, since Armenian Christmas is in January. "Because of the situation, we have decided that it's going to be only the core family members and not a big celebration as we do every year. Only one thing is for sure: We will get gifts," she said.

In recent weeks, the COVID-19 infection rate has gone up again and the death toll has risen in the West Bank and Gaza. The Palestinian Authority, which administers parts of the Israeli-occupied West Bank, has imposed a lockdown in several governorates and extended a nightly and weekend curfew throughout the whole territory. As a result, the traditional midnight mass on Christmas Eve will be closed to the general public and will be reserved for clerics. The mass will be broadcast live on TV, as it is every year.

Since the beginning of the pandemic, many parishes have switched to streaming mass online. A few hundred meters away from the Nativity Church is the Protestant Christmas Lutheran Church, where Reverend Munther Issac has invested in cameras and a sound system to allow community members to follow Sunday mass from home. 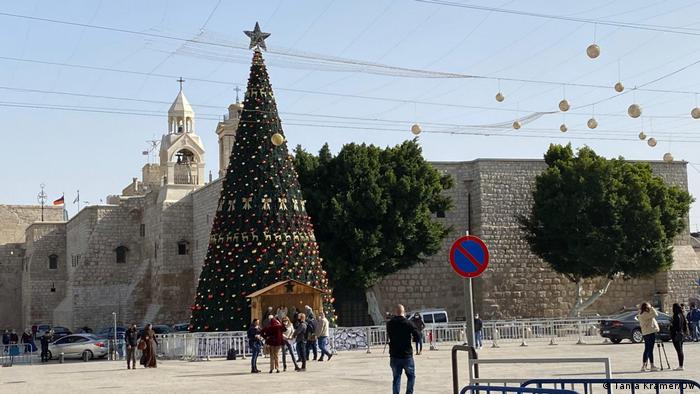 "Usually on Sundays, before COVID-19, our church would be packed with pilgrims and visitors from all over the world," said Isaac. "Obviously, this is not happening now. So, we tell those who don't feel safe to come and prefer to stay home that it's perfectly fine." At Christmas, the mass will also be streamed with only a small number of people attending the ceremony, who will be spread out across the church.

Then he looks for the positives amidst the sad atmosphere: "Maybe there is something symbolic in all this. Jesus was born in difficult times," he says. "Maybe this will help us actually discover the true meaning of Christmas away from the festive environment that Bethlehem is usually known for during Christmas." 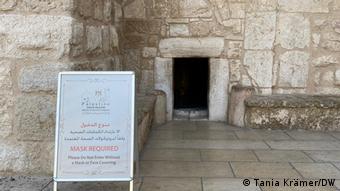 Masses are to be reserved for clerics this year

The guesthouse and restaurant, which caters to travelers, has been closed most of the year. Besides economic difficulty, Kattan also acknowledges the effects of personal confinement: "It feels doubly claustrophobic," he said. "So, you're already limiting your own movements as a precaution and then the Palestinian government limits your movements with the night curfews and the weekend lockdowns and then the Israelis limit you anyway, as you need access permits."

Usually, Christian Palestinians from the West Bank and Gaza hope to be approved for Israeli permits, which they need to be allowed to travel and visit family and friends in Israel and the West Bank during the festive season. But with COVID-19 restrictions banning most movement, Kattan is encouraging people to focus on their immediate surroundings. "If you're cooking for Christmas this year, cook a bit more. Don't cook a whole lamb. Cook a leg of a lamb but do two of them and send one to somebody who's had it bad, to a family in need. Because that's the spirit of Christmas for me."

The move ends a six-month row over an Israeli plan to annex part of the West Bank. Under the Oslo Peace accords, Israel collects taxes and duties on the PA's behalf, but then quite often withholds them.

A German IT company has started an academy to train Palestinians in software development. Despite the pandemic's challenges, it managed to run its first boot camp in Ramallah in the West Bank.