Denmark takes action against refugees | Europe | News and current affairs from around the continent | DW | 09.09.2015

Denmark has been turning back refugees on their way to Sweden and trying to dissuade others from entering the country at all. Those who have arrived are worried. Malcolm Brabant reports from Sommersted asylum center. 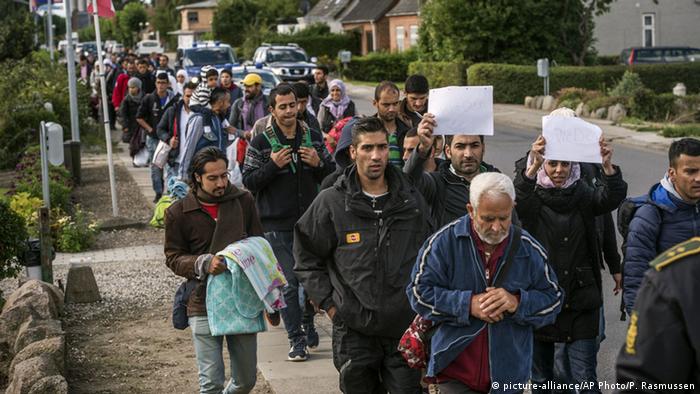 The atmosphere at the Sommersted asylum center in southern Denmark suddenly changed when the 150 Syrian residents spotted an announcement on the notice board. It was a copy of the advertisement placed in Middle Eastern newspapers by the government in Copenhagen designed to dissuade refugees and economic migrants from heading to Denmark.

The notice catalogued the new tighter regulations whose purpose is to make Denmark less attractive than other European nations. They include, reducing welfare benefits for newcomers by up to 50 percent, a one-year waiting period before refugees can bring their families to Denmark and a five-year wait for a permanent residence permit.

"The people here are not happy," said Mohammed Mathbout, a businessman from Latakia, the hometown of Syria's president Bashar Assad.

"We're not worried about the benefits. Most people have come not to live on benefit. They want to work, they are looking for work. That's the first thing. What we are worried about is permanent stay and the family situation."

An air of rebellion within the center grew as the Syrians realized that they were probably stuck in Denmark and may not have been able to travel to other countries, such as Germany or Sweden, which provide more generous terms. 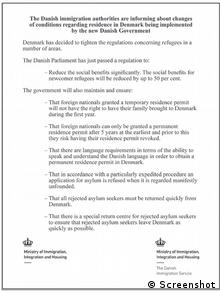 The Syrians at Sommersted all had their fingerprints taken by the Danes, in accordance with Dublin II, the European law which is supposed to govern asylum claim procedures within the EU. If the Syrians attempt to apply for asylum in Sweden or Germany, the authorities there can return them to Denmark.

Mathbout said the residents at Sommersted were hoping to hold a meeting with Danish immigration officials to seek a release paper that would enable them to travel to Sweden, which is promising residents permits to all Syrian refugees.

Among all northern European countries, Denmark has the toughest rules regarding asylum-seekers. They were enacted into law last week, three months after the general election, which saw the center-right Liberal party enter government, with the support of the anti-immigrant Danish People's Party.

The DPP has been driving the country's immigration policy and has insisted that Denmark establish border controls with Sweden and Germany. 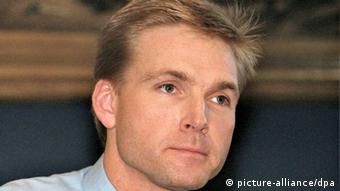 "The refugees are asylum-shopping," says Kristian Thulesen Dahl, the DPP's leader. "They are travelling through peaceful countries in order to get to the place where they can obtain the best material goods. It's infuriating."

But the prime minister, Lars Lokke Rasmussen, has thus far declined to accede to the DPP's demands, claiming that border controls would lead to greater pressure from refugees.

Rasmussen has come under pressure from German Chancellor Angela Merkel to soften Denmark's stance and to share the refugee burden. After a phone conversation with Merkel, Rasmussen agreed to admit a limited number of refugees.

"We have to be able to look ourselves in the eyes," said Rasmussen.

Since Sunday, at least 1,300 refugees have made their way to Denmark through Germany. There have been chaotic scenes at Rodby, the port where ferries arrive 24 hours a day from Puttgarten in Germany.

Some 500 are believed to have vanished. Refugees fled across railway tracks into the woods when approached by police. But some who were detained were questioned about their intentions and deported back to Germany.

"These are people who do not want to seek asylum [in Denmark] and are therefore here illegally. They have been deported and barred from re-entering the country for two years," police in southern Denmark said in a statement.

"This first group was a score of people. More will follow after their cases are processed," the statement said, adding that they were sent back by bus. 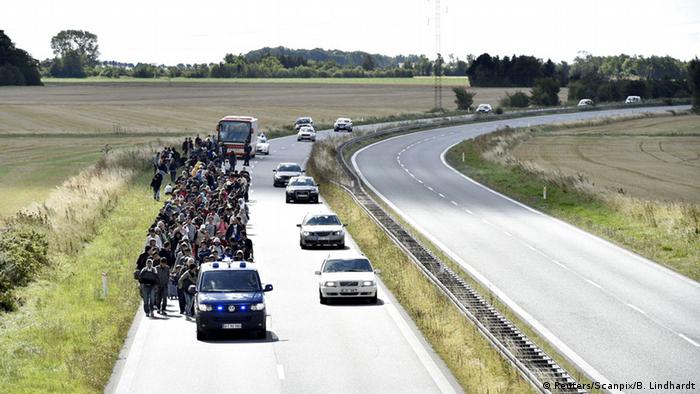 Others marched along the main motorway northwards in the hope of reaching Sweden.

Support groups met others who travelled to Copenhagen by train in the hope of getting across the Oresund Strait to the Swedish town of Malmo by rail.

Some Danes with boats reportedly carried refugees across to Sweden by sea. This was a highly symbolic act, designed to replicate the flotilla of fishing boats that ferried Jews from Nazi occupied Denmark to neutral, safe Sweden during World War II.

Swedish police said they had arrested 14 traffickers who had attempted to smuggle asylum-seekers across the Oresund Bridge that links the two countries. But it's not known how many of these had a criminal background or were from well-meaning refugee support organizations.

The sudden surge of refugees in Denmark is likely to increase the internal political pressure on Prime Minister Rasmussen. He cannot survive without the parliamentary support of the Danish People's Party, and if he aggravates them by appearing weak on immigration, the government could collapse.

The UN chief has said most of those continuing to make their way by foot across the Balkans towards Germany were genuine refugees. The UN's refugee chief says the EU's handling of a migration crisis is "dysfunctional." (08.09.2015)