Davos: Germany's Olaf Scholz says silence on Ukraine is not an option

German Chancellor Olaf Scholz has told the World Economic Forum that Russia must not be allowed to change national borders by force. It’s the third day of the forum, which is taking place remotely. 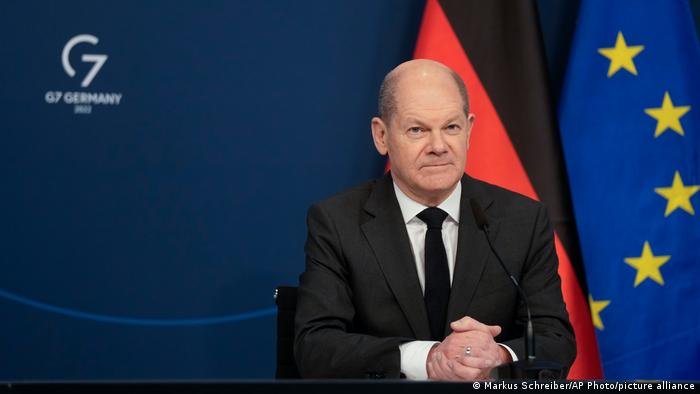 Speaking virtually to the World Economic Forum in Davos, German Chancellor Olaf Scholz said there was a clear commitment to the territorial integrity of Ukraine.

Moscow has stationed about 100,000 troops near the border with Ukraine, something the West has interpreted as preparation for invasion in order to force NATO to make concessions on issues like the possible accession of Ukraine into the bloc.

Scholz said it was not yet possible to say whether the intensive diplomatic contacts could de-escalate the situation on Russia's border with Ukraine, but added that "borders must not be moved by force."

"After years of growing tensions, silence is not a reasonable option," Scholz said in his first forum speech as chancellor, adding that the strength of the law must be upheld, and not the law of the strongest.

"The Russian side is aware of our determination. I hope it is also aware that the benefits of cooperation are significantly higher than the price of further confrontation," he said.

Scholz became Germany's chancellor in December after 16 years with Angela Merkel at the helm, pledging his center-left-led coalition would offer a "new beginning" for Europe's top economy.

More pressingly, Scholz also faces the task of dealing with the fears of a possible Russian invasion of Ukraine and guiding Germany out of the coronavirus crisis.

Touching on the pandemic, Scholz said a genuine effort must be made to vaccinate globally so that new virus variants could be prevented from emerging.

"Without a truly global immunization campaign, we will soon run out of letters in the Greek alphabet to name new virus variants," Scholz said.

What else has been happening at Davos?

Normally a face-to-face gathering of political and corporate power players in the Swiss Alps, the forum is online for the second year in a row due to the coronavirus pandemic.

UN chief Antonio Guterres told the forum that the world must vaccinate everybody against COVID-19 to ensure a way out of the pandemic.

Israeli Prime Minister Naftali Bennett on Tuesday touted his country's success in vaccinating against coronavirus and said allowing money to flow back into Iran could lead to "terror on steroids."