Darmstadt promoted to Bundesliga, Karlsruhe to face Hamburg in playoff

It was a dramatic final day in the German second division with three teams aiming for automatic promotion to the Bundesliga. Darmstadt needed a win to go up, and they got the job done with a 1-0 against St. Pauli. 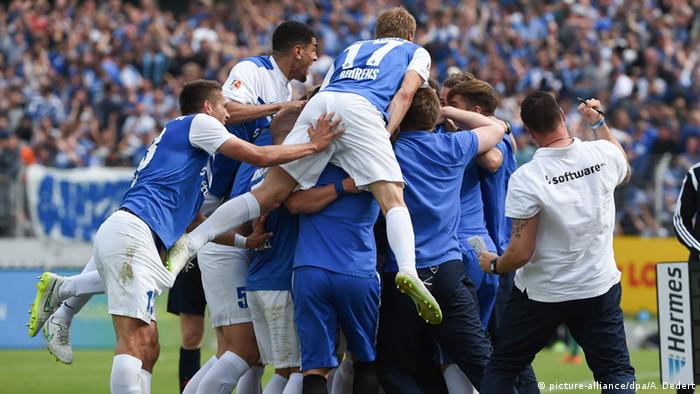 Darmstadt came into the final matchday second in the table, with Karlsruhe and Kaiserslautern trailing by a point in third and fourth respectively.

But Darmstadt were made to work for their 1-0 win against relegation-threatened St. Pauli. It wasn't until minute 70 that Tobias Kempe sent a free-kick that sneaked past St. Pauli goalkeeper Robin Himmelmann for the lone goal of the match.

Darmstadt have only played two seasons in the Bundesliga: 1978-79 and 1981-82. The fans invaded the pitch after the final whistle, sparking stunning celebrations in the unique Merck-Stadion am Böllenfalltor. 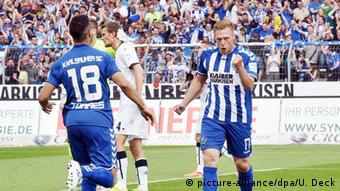 Karlsruhe will face Hamburg in the playoff

For much of the afternoon, it looked as though Karlsruhe might claim promotion. They jumped out to an early lead over 1860 Munich on a Kai Bülow goal. Manuel Torres doubled that advantage in the second half, but the 2-0 final result meant that Karlsruhe still finished one point behind Darmstadt in the table.

Still, they now face Hamburg over two legs in the relegation/promotion playoff on May 28 and June 1.

The big losers on the day were Kaiserslautern who drew 1-1 with second-division champions Ingolstadt. Fans of the Red Devils can console themselves with the fact that they would have come up short even with a win.

At the bottom of the second division, six teams were fighting for survival. Despite two late goals to earn a draw with Heidenheim, of which one was scored by goalkeeper Martin Männel, Erzgebirge Aue were relegated to the third division, whilst 1860 Munich's defeat to Karlsruhe left them in the playoff spot against third-division Holstein Kiel.

All you need to know about Darmstadt

Newly promoted Darmstadt rose three divisions in two seasons. Impossible, you say. Read on to find out the extraordinary story behind the traditional club that will be rejoining Germany's football elite next season. (24.05.2015)

The Bundesliga waves farewell to Paderborn and Freiburg after a long season, while Hamburg will need to overcome a playoff to avoid their first-ever relegation. Stuttgart and Hannover are safe. (23.05.2015)

Ingolstadt beat RB Leipzig 2-1 on Sunday to secure the best record in the German second division and promotion to the top flight. But they're a somewhat controversial addition to the Bundesliga. (17.05.2015)