The Bundesliga waves farewell to Paderborn and Freiburg after a long season, while Hamburg will need to overcome a playoff to avoid their first-ever relegation. Stuttgart and Hannover are safe. 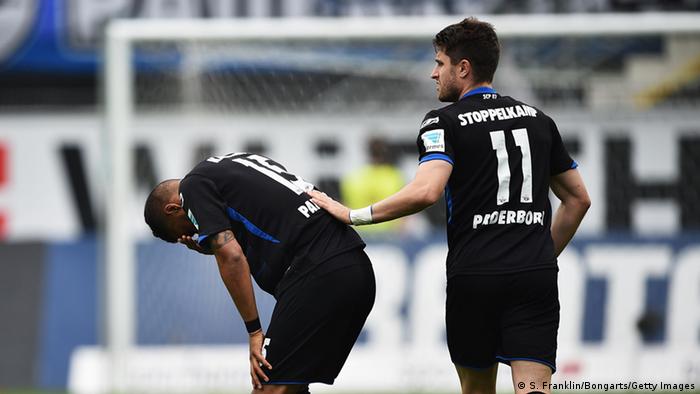 Freiburg and Paderborn have been relegated from the Bundesliga after a captivating final day of action on Matchday 34. Hamburg, meanwhile, will need to see-off a second division club in the playoff to secure their survival.

Paderborn went down 2-1 in Stuttgart, whilst Freiburg lost by the same scoreline in Hannover. Crucially, Hamburg's 2-0 victory over Schalke moves Bruno Labbadia's side out of the automatic positions and into 16th.

Paderborn's enthusiasm was rewarded within four minutes when Marc Vucinovic, the joker in the pack with just three starts this season, arrowed a low shot past Sven Ulreich. Simultaneously, Hannover struck their first of the afternoon with Hiroshi Kiyotake netting a well-judged diving header inside the 18-yard-box.

Both goals succumbed Hamburg to 18th in the Bundesliga with the atmosphere in the Northern German city subdued for the rest of the first-half.

On 35 minutes, Stuttgart's Daniel Didavi stepped up to the mark with a rasping finish from the edge of the box to level the scores. The Swabians should have been ahead earlier, but were in control once the scores were all square. 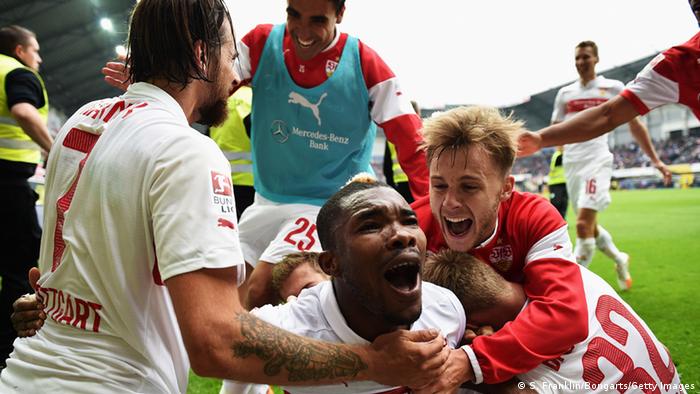 Jubilation for Stuttgart who won all three of their final games

Roar of the Dinosaur

But after the break, the bottom-five was flipped on its head when Hamburg took the lead on 47 minutes - Croatian Ivica Olic bundling home from close-range after a scrappy corner-kick.

The Imtech Arena was boisterous once more; the atmosphere in Paderborn and Hannover deflated as the league's only-surviving club since 1963 moved out of the bottom-three altogether.

Minutes later, Slobodan Rajkovic headed in a second for Labbadia's side who were in cruise control against an abject Schalke, who have qualified for the Europa League next season.

Daniel Ginczek picked up his seventh crucial goal since the end of March as he nudged Stuttgart out of the bottom-three and to their second successive survival under the tutelage of Huub Stevens.

An own goal from Pavel Krmas increased the scale of the task for Freiburg in the last 10 minutes, but Christian Streich was unable to avoid the Black Forest slipping into the bottom-two.

Meanwhile, Hertha Berlin avoided falling into the bottom-three on the last day despite losing 2-1 at Hoffenheim. Roberto Firmino hitting the winner late-on after Roy Beerens had cancelled out the early goal from Anthony Modeste.

On Thursday, Hamburg will take on the second division's third-placed club in the first leg of the relegation playoff. The opponent will be confirmed when the second-tier comes to an end tomorrow.

Hamburg survive for at least one more week

It’s looking a lot like 2014 all over again, as Hamburg once more clawed their way into the end-of-season playoff on the final matchday. Kai Dambach witnessed the nerve-wracking Houdini act live in the Imtech Arena. (23.05.2015)

Paderborn’s adventure comes to an end

Emotions ran high in Paderborn as the smallest Bundesliga side was relegated. DW's Jonathan Harding experienced the drama and the highs-and-lows of the final day at the Benteler Arena. (23.05.2015)