Cyprus is under pressure to withdraw its Eurovision song entry that has upset many Orthodox Christians in the country. The state broadcaster has blamed critics for misinterpreting the lyrics. 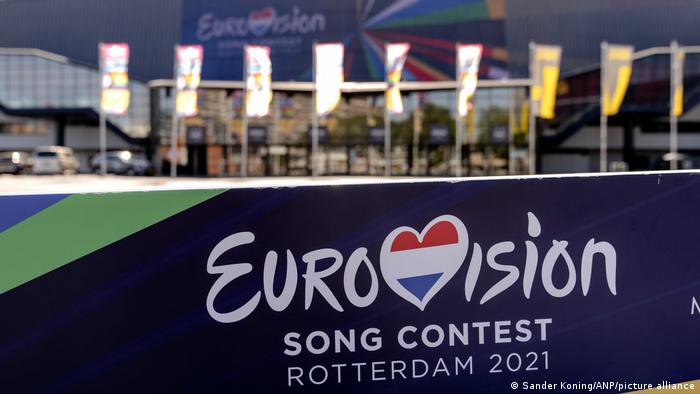 The Eurovision song contest 2021 is set to be held in Rotterdam, the Netherlands in May.

Cyprus' official Eurovision Song Contest entry for this year has triggered controversy within the island nation, and one anonymous caller threatened to "burn down" national broadcaster CyBC on Friday.

The song, "El Diablo" (Spanish for The Devil), has angered some of the country's devout Christians who say the dance mix has scandalized the faithful with its references to the devil.

CyBC informed the police about the caller's threat to "burn the building down" in protest over the song, the Cyprus News Agency reported.

Police said they were investigating the matter.

The person who called CyBC later apologized for making the threat.

"I was in a state of shock and angry with the lyrics of the song that will represent Cyprus at Eurovision," he told the Greek-language Politis newspaper. "The reference to Satan made me feel angry, and so I reacted with a boiling soul and said something for which I apologize."

The man added that he still disagreed with the song, "but I do not believe in violent reactions and reassure my fellow citizens that I will not carry out my threats."

What do critics say?

State broadcaster CyBC announced "El Diablo" as its pick to represent Cyprus at the Eurovision contest on Wednesday.

An association of religious teachers blasted the song, urging CyBC to withdraw it from the contest. It expressed "abhorrence," questioning why a song "of such low quality" chosen rather than one that promotes the culture of Cyprus in Europe.

"If the only thing we are angling for is the top place, we shouldn't participate at all if we are representing ourselves with every and any diabolic sub-culture," the association said.

The song, performed by Greek singer Elena Tsagrinou, includes lyrics including "I fell in love… I gave my heart to El Diablo" and "I gave it up because he tells me I'm his angel," calling the relationship spicy and hotter than sriracha, a hot sauce.

"This is scandalous to us Christians," said Demetris P, who started a petition on a popular Cypriot website calling on the broadcaster to ditch the song.

His petition had received more than 2,500 signatures until Friday afternoon.

What was the broadcaster's response?

CyBC defended the song saying the critics had misinterpreted the lyrics and that the track was about people in toxic relationships.

It was about "a girl who is in an exploitative relationship with a freeloader she calls El Diablo," the broadcaster said in a statement, adding that the song was inspired by the "eternal struggle of good versus evil."

Cyprus has participated in the Eurovision 36 times since 1981 but has never won. It came close in 2018, when Eleni Foureira's "Fuego" finished in second place, losing to Israel.

This year, the Eurovision contest is set to be held this year in Rotterdam, the Netherlands, in May.

Germans have chosen Lithuania's entry as the winner of their substitute for the Eurovision Song Contest final. The real version was canceled due to the coronavirus pandemic.