When Jendrik Sigwart found out that he was going to represent Germany at the Eurovision Song Contest, he was grocery shopping. "I'm absolutely thrilled that I'm going to the ESC for Germany this year," the young man beamed, adding he is a huge fan of the song contest. "I always watched it as a child and thought, what a great show, what great people," he said."What inspires me is the diversity. That everyone can be who they want to be, that everyone can also be crazy."

Perhaps the 26-year-old from Hamburg is a bit crazy, too. He is certainly a cheerful guy. At the ESC in Rotterdam, he will sing a song he composed called "I don't feel hate (I just feel sorry)" — his personal strategy on how to deal with insults, bullying and discrimination: to simply rise above it all. "Hate doesn't do any good," he says, adding that anger doesn't change the other person's behavior.

With a sparkly ukulele

Jendrik will be bringing his beloved ukulele, an instrument he decorated with 4,000 rhinestones, and that he first played his ESC song on. "The ukulele creates a good mood," he says, arguing scientists have found out as much, and he certainly feels that way. With that abundance of optimism, he probably convinced the two ESC juries — 20 music experts on the one panel; 100 die-hard ESC fans on the other — to select him as Germany's candidate. 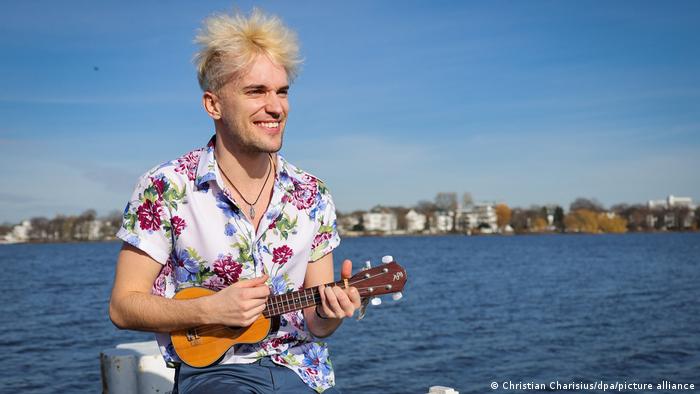 The ukulele is Sigwart's constant companion

The young man has been writing songs for years, and apart from the ukulele, he also plays the piano and violin. He studied musical theater in the German city of Osnabrück and has since been on stage regularly, playing lead roles in musicals including My Fair Lady, Hairspray and Peter Pan.

He has plenty of stage experience performing in front of large audiences, a bonus even if it is unlikely the show will have an actual live audience in Rotterdam this year. Last year, to the regret of millions of fans, the show was cancelled altogether because of the pandemic.

Either way, Sigwart is happy his long-cherished dream of an ESC appearance is about to come true.

He composed his song when all musicals were cancelled because of the pandemic. He had a lot of free time, so he produced "How to make a music video" film clips and shared them on TikTok and Instagram.

The clips start with the crucial question: how can you create a clip without money? With the help of friends and family, he created a laundromat setting for his video with used old washing machines. Cake fights also play an essential role — which, unfortunately, will not be allowed in Rotterdam. "After all, we're not allowed to mess up the stage," he laughed.

He couldn't find an email address to apply to the German ESC organizers, so he just hoped that one of them would discover his song entry in social media and invite him, Jendrik Sigwart said at a press conference. That's exactly what happened. The young man from Hamburg was chosen among 153 applicants. 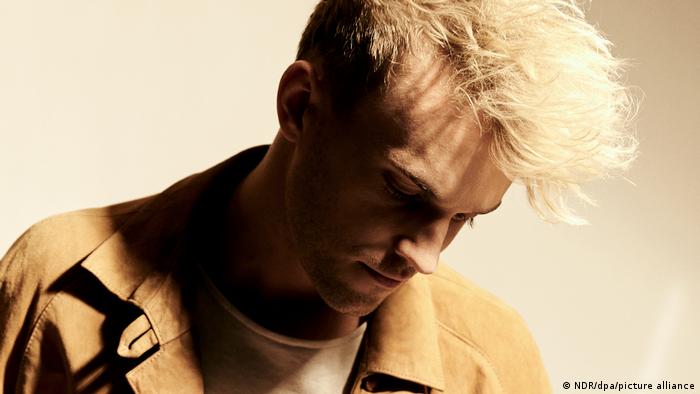 Jendrik Sigwart has sung and danced in many musicals

Can't wait to be back on stage

"We are delighted to have an incredibly creative artist bursting with ideas," said Germany's ESC delegation manager, Alexandra Wolfslast. He is incredibly confident at what he does, added Thomas Schreiber, an entertainment expert with the Norddeutscher Rundfunk broadcaster. "He can sing, tap dance, has sensational moves, and is hungry to be on stage."

Will Jendrik convince the foreign juries as well, when artists from 41 countries compete against each other on May 22 under the motto "Open Up"?

In recent years, the German entries have lagged far behind in the public's favor. The last time Germany won the ESC was in 2010, with Lena and her song "Satellite."

It remains to be seen whether Jendrik can follow in her footsteps. He said it doesn't matter that much to him. "I'm not watching the competition and thinking, 'Oh, my God, look how good they are!' — I'm looking forward to being on stage with all these great artists."

An official YouTube video has emerged with the Queen of Pop singing her song "Like a Prayer" as she appeared at the Eurovision Song Contest finale on Saturday. The soundtrack in the clip, however, is audibly different.

Opinion: Should the Eurovision Song Contest be politicized?

Alternatives to the Eurovision Song Contest

This would have been Eurovision Song Contest week. Organizers, participants and fans have done their best to create a little bit of an ESC vibe despite the fact that the contest was cancelled.