As Cuba mourns the death of Fidel Castro, a pioneering reforestation project that evolved into a UNESCO reserve and unique eco-community showcases both the country's socialist heritage, and its future challenges. 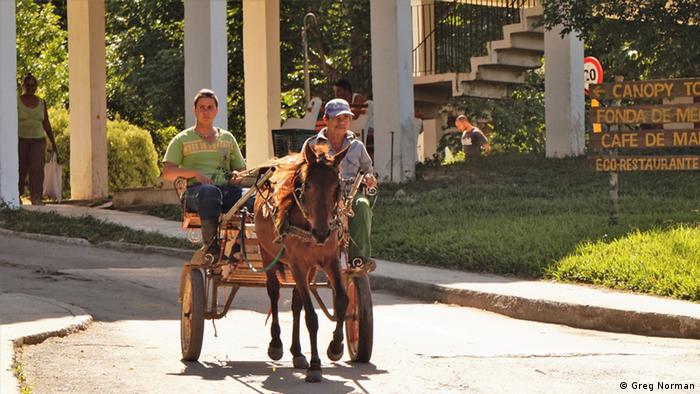 The Cuban town of Las Terrazas is like someone's nostalgic idea of the 1950s. Neat rows of white clapboard homes climb into the surrounding forested hills. Rickety horse-drawn carts, vintage American cars and Russian Ladas crisscross the green, undulating landscape. Residents chat warmly with each other.

Situated near the border of Pinar del Rio and Havana provinces, the community is barely a 40-minute drive from the Cuban capital. Yet it feels a world away from the noise, music and diesel-filled streets of Havana.

"A lot of people want to live here," beams taxi driver and local business owner Jorge Duque from behind the wheel of his 1955 violet and white Chevrolet as he drives into town. "It's very beautiful."

But Las Terrazas wasn't always a picture postcard scene. Just after the 1959 communist revolution, the area suffered extreme poverty and a landscape that had long been stripped bare to cultivate coffee. 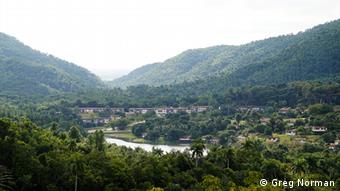 Less than 10 years later, Las Terrazas began a pioneering social and environmental experiment with government housing, lakes and a community-led reforestation program that saw around 6 million trees planted over thousands of hectares. The once-barren hillsides were transformed into a UNESCO-protected biosphere teeming with plants and animals.

Now, turkey vultures swoop overhead; the Tody, a diminutive bright green flycatcher, flits from branch to branch; and the distinctive call of the Tocororo, the country's national bird, rings from the terraces of cedar and hibiscus trees.

"I know I am lucky to be able to live here," says Francisco Valdez, a local resident who preferred not to use his real name. He recently returned to the village after a stint studying and training as a boxer in Havana.

"At the moment I am living with my mother and sister. To be honest, I would like my own place one day - but there are very strict rules on planning and development."

The 23-year-old ecological researcher and guide, like most young people who live in Las Terrazas, was born here. If he wanted to build a new house or extend his existing family home, he'd have to go to the central planning committee. The 1,000-strong community has 80 houses and 127 apartments, so most families share. 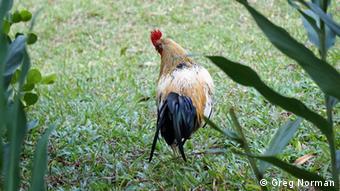 These strict construction regulations serve to protect the surrounding habitat, where residents sustainably manage the forest that plays a central role in their lives. Various trees provide food and medicine, while a specially designated area acts as a production forest.

"We now practice both deforestation and reforestation here. If you take even one tree, it has to be replaced," explains Valdez.

"For example, if I need wood to work on my house, I go to the office, I receive permission, I cut a tree and then I plant one."

The transformation of the area from one of bare and degraded hills to a flourishing and diverse ecosystem has been a life's work for Fidel Hernandez Figueroa, a forest scientist and head of the Sierra Del Rosario biosphere's ecological research station, who moved to the area 33 years ago.
"The key to success has undoubtedly been to use an active community and well-established systems to rehabilitate an area to its original function and encourage the return of large numbers of wildlife," he told DW. "We have been able to convince local communities that the areas environment is now worth protecting."

From economic collapse to ecotourism

Forestry and conservation once provided a decent living for the area's residents - but when the Soviet Union and by extension the Cuban economy collapsed in 1991, the area was forced to open up to tourism. 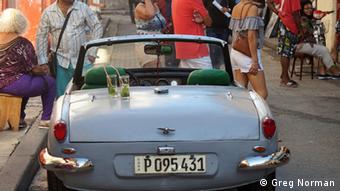 By 1994, the Moka Hotel - a restaurant and coffeeshop - were up and running in a bid to draw holidaymakers to the biosphere.

In the years since, the attractions have multiplied to include a zip line, boating lake, vibrant artistic community, and eateries boasting some of the best vegetarian food in the country.

But it's the wildlife that people really come for. Las Terrazas is a birdwatcher's dream, with an estimated 131 species living in the forests. About a third of the community still works in conservation - but now most of the jobs are in ecotourism.

Las Terrazas' history is in many ways the history of Cuba and Castro's rule, except on a smaller scale. The community started as a grand social project, but was forced to adapt and open up to market forces following economic collapse. 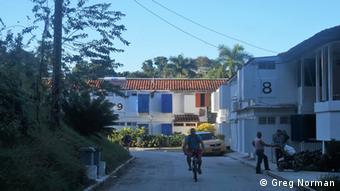 A man cycling on the streets of Las Terrazas

Modern tourism now exists alongside a way of life seemingly unchanged for decades. For the older generation - veterans of the Las Terrazas' reforestation effort - it's a far cry from the impoverished community they experienced. Reminders of their work to transform the once denuded landscape are everywhere.

These days, they spend their time fishing or relaxing on the terraces of their houses - painted the red, white and blue of Cuba's national flag.

The question for many is what will happen now, with the death of Fidel Castro and the election of Donald Trump to the US presidency. Some of the younger generation, in particular, privately hope for more freedoms.

"My parents are about 60 and they have barely left this area, never mind Cuba," Valdez told DW. "I just want the chance to have a bit more, to see different places, to have nice things, to have enough money."

Hernandez Figueroa believes that the future is unlikely to bring another project on the scale of the Sierra Del Rosario, but does believe lessons have been learned for the country's natural environment.

"Given the country's current economic condition, a project of the magnitude of Las Terrazas, where we were able to plant millions of trees and create some 60 kilometers of access roads, is not possible," he says. "But it has led to more respect and the restoration of landscapes, particularly in mountainous areas. For me it is key that we continue to respect and listen to our natural environment."

Thousands of demonstrators, including Greta Thunberg, marched in Germany to demand "no more excuses" from politicians as Germans prepare to head to the polls.