The Marella Discovery picked up 111 migrants, including 33 children, near Greece's Peloponnese peninsula. Despite a large fall in migrants crossing the Mediterranean, six people die each day making the journey. 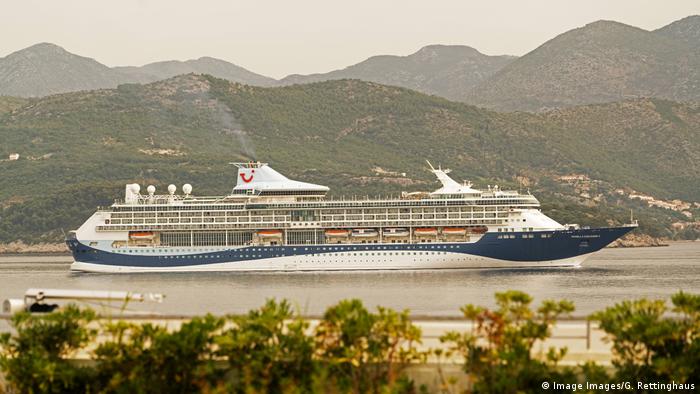 A Maltese-registered cruise ship sailing close to the Greek mainland has rescued more than a hundred migrants, the country's coast guard said on Sunday.

The migrants were picked up by the Marella Discovery, an 11-deck luxury liner equipped with swimming pools, a casino and a theater.

The migrants' boat was found in distress on Saturday evening, some 74 kilometers (40 nautical miles) off Greece's Peloponnese peninsula.

The coast guard did not say which countries the migrants were from or where their boat departed.

The passengers were taken to the Greek port of Kalamata.

Two of the migrant boat's operators were arrested.

Several times a week, boatloads of people — many of them from Africa — attempt to cross the Mediterranean Sea for a better life in Europe.

Greece, Italy and Spain have borne the brunt of the influx of newcomers over the past decade, many of whom are picked up by migrant rescue ships operated by European charities.

A failure by European Union states to agree an effective disembarkation procedure has prompted Italy's populist government to ban several migrant ships from docking at the country's ports.

Although the number of migrants attempting the perilous journey has fallen from 362,000 in 2016 to 116,000 in 2018, an average of six migrants die every day in the Mediterranean, the UN High Commissioner for Refugees reports.

Already this year, at least 426 people have died during the crossing, according to the French medical charity Doctors Without Borders (MSF).

MSF and the NGO SOS Mediterranee on Sunday announced they would resume migrant rescues with the 69-meter Ocean Viking ship.

Carole Rackete says she is concerned about the rhetoric used by Italian interior minister Matteo Salvini over the migrant rescue crisis. The German captain was arrested after forcing her ship into an Italian port. (06.07.2019)

Joe Biden inauguration: 'This is democracy's day' 2h ago