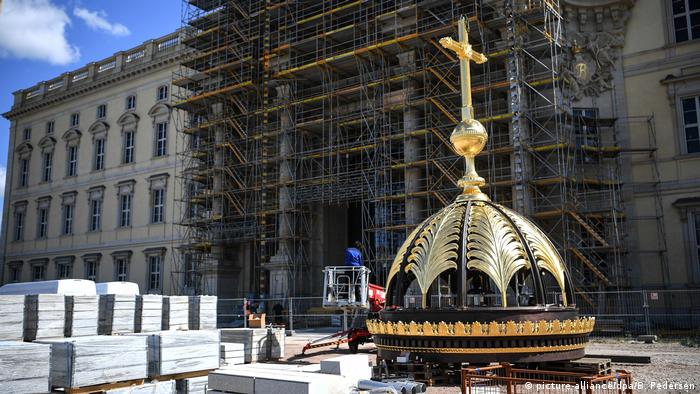 Berlin wind-conditions permitting, a crane was due Friday to host the 17-ton dome reminiscent of Prussian imperialism to top off the reconstructed Royal Palace in Berlin.

At issue is not only a cross that will atop Berlin's latest skyline eye-catcher but also a band of text compiled by 19th-century King Friedrich Wilhelm IV calling on all peoples to submit to Christianity when he had the dome added in the 1840s.

Restorative advocates, via a donors association, argue the palace's reconstruction, but with a very different modern interior, will restore Berlin's visual axis starting at the Brandenburg Gate and reflect reconciliation also contained in Christianity.

The Humboldt Forum, costing €644 million ($711 million) and approved by the Bundestag parliament in 2002, will feature artefacts from Asia, Africa, the Americas and Oceania and Berlin's history as well as spaces for study and conferences.

The original, dating back to the 18th century, survived World War II only as a shell; located post-war in walled off East Berlin. Communist authorities tore down those remains, erected a 1970s Palace of the Republic, which, after German unification in 1990 was demolished, also amid debate. 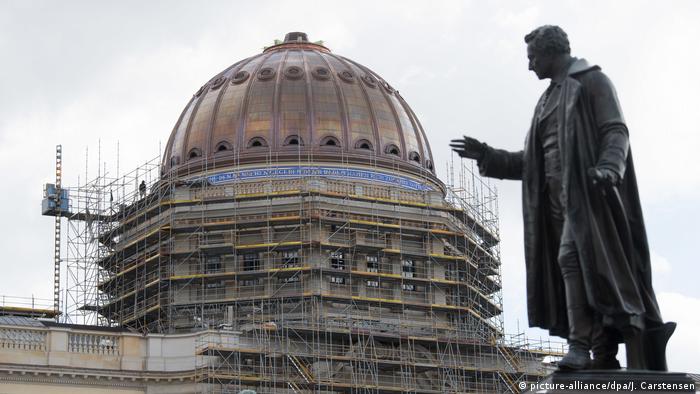 The dome of the reconstructed Berlin Palace

"Christianity has been a channel through which colonialism also functioned and was strengthened. It happened quasi in the name of Christianity, that things were stolen or destroyed," Kupka said, referring to Friedrich Wilhelm's inscription.

"This is simply a very blatant statement that actually undermines everything that the Humboldt Forum claims to want to be."

Germany colonialism in Africa and the Pacific ended abruptly in 1914 with seizures by Britain and its allies at the end of World War I.

On a commentary Thursday in the Berlin-based Jüdische Allgemeine newspaper, Rabbi Andreas Nachama urged Berlin's Catholic and Protestant bishops to take a lead in getting the Prussian king's quote removed from the new dome.

Frederick William IV had made "a name for himself in the bloody suppression of [then-imperial Germany's] revolution of 1848", said Nachama.

"I am curious to see how the Berlin bishops will react to the appropriation of their faith, for they are certainly promoters of religious cooperation and respect," added Nachama, who heads the German council for Christian-Jewish cooperation.

Berlin city-state's Culture Senator Klaus Lederer of the post-communist Left Party said the mounting of the cross was , "a clearly religious sign" that counteracted "almost everything we want with the Humboldt Forum: To show how ambiguous, diverse, intricate, broader and deeper our roots really are."

Federal States Minister for Culture Monika Grütters of Chancellor Angela Merkel's Christian Democrats (CDU) described the dome's cross as a Christian symbol "for charity, freedom, cosmopolitanism and tolerance," reflected in the new Humboldt center's task of being a "Forum of Understanding" among world cultures.

She added that the chair of the Association of Muslims in Germany had encouraged her to stand by the country's Christian roots.

'A bit pregnant,' not possible

Wilhelm von Boddien, veteran director of the palace reconstruction's fund-raising association said leaving out the cross would have been contrary to the "reconstruction of a lost monument."

"That does not work for such a project. One then immediately opens the door to other omissions, and one becomes easily criticized. Here the principle applies: Pregnant or not pregnant, a bit pregnant is not possible."

The cross, "the most brutal death penalty in antiquity," used to murder Jesus of Nazareth, said von Boddien, had since been misused in more modern times to "send people into murderous battles."

On the dome of the Humboldt Forum it could "also be understood as an exhortation to all peoples to more peace and charity," he said.