The first batches will go to Commonwealth countries like Kenya, Jamaica, as well as Asian countries like Laos, Indonesia and Cambodia. The UK wants to have the whole world vaccinated by 2022. 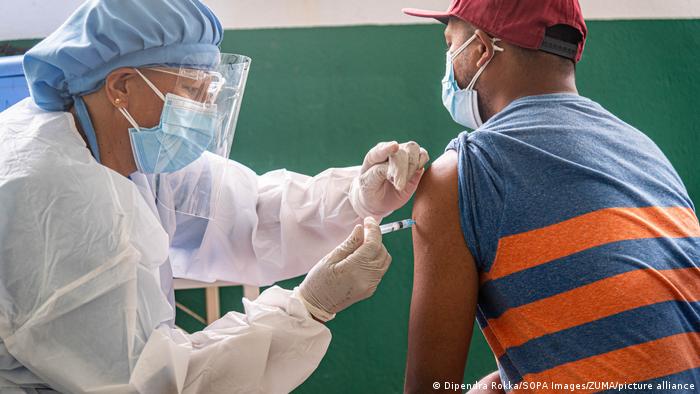 It is part of a pledge to donate 100 million shots worldwide by next June.

Where are the UK vaccine donations going?

Raab revealed that Commonwealth countries like Kenyaand Jamaica will benefit from the initial delivery of 9 million doses.

He said that "vulnerable places like Laos and Cambodia, partners like Indonesia, Malaysia," would also be sent vaccine doses. He said he hopes the whole world will be vaccinated by 2022.

Raab said the United Kingdomꞌs commitment to distribute 100 million vaccine shots showed "Britain as a life-saving force for good in the world."

"This demonstrates weꞌre not just doing it because itꞌs our own interest," he added.

UK Prime Minister Boris Johnson will meet Kenyan President Uhuru Kenyatta later on Wednesday as they prepare to host a fundraising summit on Thursday in London.

Johnson will offer Kenyatta 817,000 AstraZeneca vaccine doses, half of which will be sent to the African countryꞌs capital Nairobi this week.

These first deliveries of the vaccine were agreed with G7 countries at meetings held in Cornwall on June 11-13.

Why does the UK want to give more vaccines?

Raab said that "on the current trajectory, the world will only be adequately vaccinated at 2024" so the UK wants "to get that date back to the middle of next year."

The UK will be giving 20% of its total vaccine doses directly with 80% of them donated under the COVAX scheme.

In this first installment, 5 million shots will be delivered via COVAX and 4 million directly to "the poorest, most vulnerable countries around the world," Raab said.

The UK Foreign Minister called the vaccine delivery "a moral duty" that will allow these countries to open up for business and holidays while safeguarding against "further waves of the virus or variants in the future."

"We know we won't be safe until everyone is safe," Raab added.

The UK has vaccinated 71% of its own adults, having removed all pandemic restrictions in June even as cases continued to climb.

Since then, daily cases have started to drop and now the International Monetary Fund is predicting the UK economy will grow by 7% this year.

This contrasts with poorer countries that do not have access to vaccines with the 54-nation Commonwealth reporting $345 billion (€292.4 million) in lost trade caused by the COVID-19 pandemic.

US President Joe Biden has called on global leaders to share COVID vaccines with the developing world. He said the United States would become the "arsenal of vaccines" to help poorer nations to beat coronavirus.