Efforts to contain the spread of the coronavirus have left many Cambodians without access to food, essential medicines and other necessities for weeks. 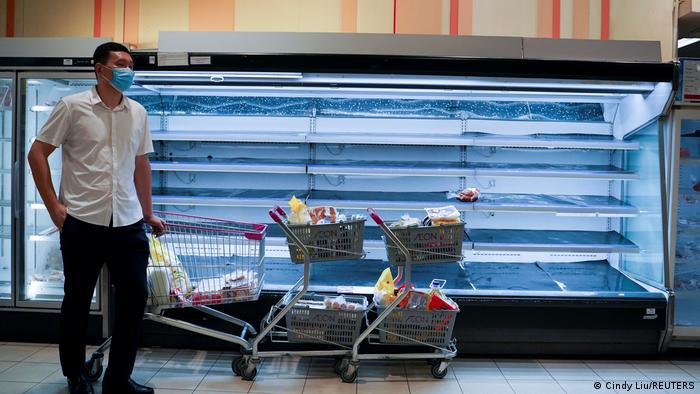 After having seemingly triumphed over the COVID-19 pandemic in 2020, recording just 366 cases in total last year, Cambodia has been sent into a tailspin. The setback follows a major outbreak on February 20, which has now seen cumulative case numbers rise above 20,000 and more than 130 deaths.

As infections spiked, on April 15 the government and local authorities put much of the capital, Phnom Penh, and nearby Takhmao under strict lockdown, with residents of the worst-hit areas even banned from leaving their homes to purchase food.

Businesses closed, markets were ordered to shut and street-side vendors were banned, leading many to accuse the government of causing a humanitarian crisis. Some even said people were close to starvation in the capital city.

On the streets of Phnom Penh, where public protests are rarely allowed by the authorities, residents demonstrated against the lockdown measures. They claimed they were unable to access food supplies even after the government promised to provide free food parcels to all households.

Fears of widespread food insecurity have diminished since last week when, because of economic and political pressure, the government announced that some of the strictest of lockdown measures were ending, despite infection numbers still rising at the time.

Under a three-color restriction system, which has also been rolled out to other areas of the country hardest hit by the pandemic, residents living in the designated "red zones" in the cities are banned from leaving their homes to even purchase food. 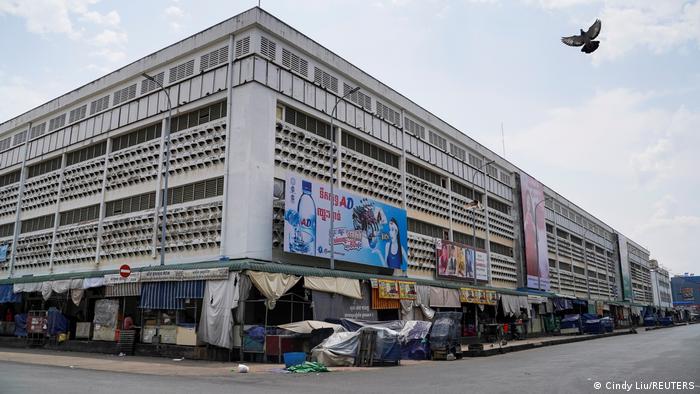 Residents living in the designated 'red zones' are banned from leaving their homes, even to purchase food

Even for residents in the "orange" and "yellow" zones, where restrictions are looser, food markets have been closed and access to basic staples is difficult.

Data from government ministries suggest that food prices have increased since the strict lockdown measures were imposed in mid-April. In the red and orange zones, work at the country's vital garment manufacturing factories also ground to a halt, with employees furloughed on less than half their minimum wage.

Hardest-hit have been workers in the informal sector, which makes up more than half of the country's entire workforce, who faced the brunt of Cambodia's financial woes last year as the economy contracted by around 3.1%, according to the Asian Development Bank.

At the end of April, Prime Minister Hun Sen promised that any poor household living under a lockdown restriction could apply for a one-off cash handout from the government. He later retracted this promise, given that this applied to more than 100,000 households, and instead vowed to provide them with food parcels delivered by the government or the ruling party-aligned charities.

On April 29, more than 100 people protested in the streets of Phnom Penh's Meanchey district over claims they were going hungry. A separate protest the next day ended when the authorities arrived with food donations.

The following weekend, Amnesty International warned that Cambodia's "mismanaged lockdown has brought them to the precipice of a humanitarian crisis."

The government rejected this criticism. "In Cambodia, no Cambodian is starving yet," the ruling party's spokesman Sok Eysan told local media on May 2. "COVID-19 has had devastating consequences for people and workers in every country in the world."

However, the pressure was building on the ruling Cambodian People's Party (CPP), which has been in power since 1979 and now rules the country as a de facto one-party state, after forcibly dissolving the largest opposition party in 2017 on spurious charges of plotting a US-backed coup. 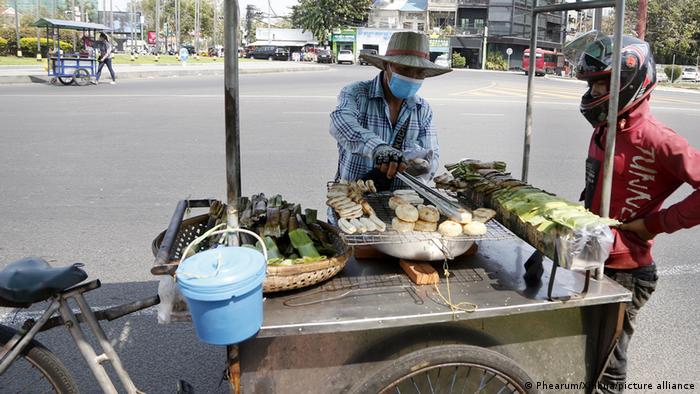 As businesses closed and street-side vendors were banned, many accused authorities of causing a humanitarian crisis

At midnight on May 5, the government's lockdown measures across several cities came to an end after the prime minister intervened to appease public opposition to the severity of the restrictions. A ban on all inter-provincial travel also ended last week.

"There is no reason to lock down Phnom Penh and any province anymore. We will reopen the lockdown area, except that a province or capital can close a small area which has a high risk of coronavirus spread," Hun Sen wrote on his Facebook page.

Since last week, local authorities have been given greater powers to enforce the three-color lockdown scheme in a more localized mode.

"Initially, the government made sporadic decisions leading to costly missteps. The new measures are much more reasonable and mechanisms to distribute food seem to have improved," Ou Virak, president of the Phnom Penh-based Future Forum think tank, told DW.

"It is easier to target food donations as well as allow some people to go back to work and carry on with their lives, easing both the economic pressure and potential political ones," he added.

Sophal Ear, an associate professor at the US-based Occidental College, also notes that the situation has improved, but added: "It's appalling that it required a five-alarm reaction by Amnesty International and others to cause the authorities to wake up to the fact that a three-week lockdown would lead to a crisis."

As case numbers spiked in April, the Cambodian authorities thought they could simply enforce the strictest of lockdowns like the Chinese authorities did in Wuhan, Sophal Ear told DW. "And they did it," he added, "minus the fact that they were so disorganized." 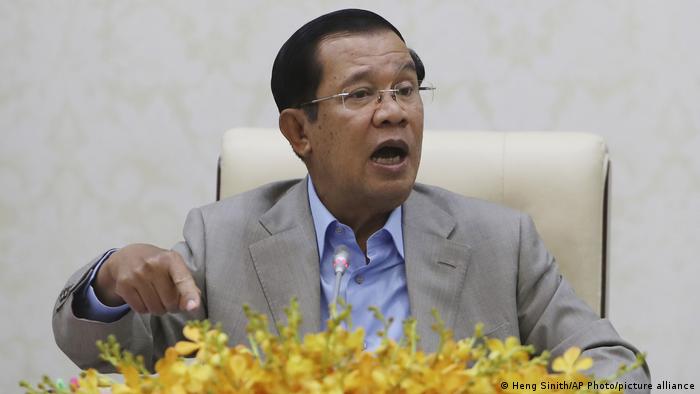 On May 5, the lockdown measures came to an end after Prime Minister Hun Sen intervened to appease public opposition

Not everyone, however, agrees that Cambodia faced such a food insecurity crisis as some made out.

"Initial reports of the food supply realities in the red zones of Phnom Penh were gross overreactions and depicted a very narrow understanding, if any, of the realities on the ground here in Phnom Penh," said a source with knowledge of government policy, who asked not to be named.

"Naturally, there are areas where the rollout could have been more effective, but overall the government's actions have been both reasonable and responsible."

According to the source, one of the most significant changes was last week's removal of restrictions on Phnom Penh and Takhmao residents from travelling to different provinces.

In normal times of crisis, when access to employment and food is precarious, many urban residents will return to their provincial homes where they can work on farms and grow their own food.

"The lifting of the interprovincial travel ban has resolved this impediment," the source said.

However, there are still major concerns that food insecurity could become a problem again if the authorities are forced to reimpose wider lockdowns across cities.

"I'm sure the authorities will consider another lockdown without batting an eyelid; right now the authorities feel all powerful, very much like Beijing and the Chinese Communist Party. That's dangerous, for everyone," Sophal Ear said.

When will we reach herd immunity?

"While lockdown measures have been lifted in many areas, red zones remain under strict lockdown and we understand that many people remain at severe risk of deprivation and hunger in these locations," said Ming Yu Hah, Amnesty International's deputy regional director for campaigns.

Anita Dullard, the International Committee of the Red Cross spokesperson in Asia-Pacific, said that the situation is changing very quickly and by the day.

"While some people have returned to work, there are others who still face restrictions. For many low-paid workers, any disruption in wages or loss of income is likely to be felt for a long time as arrears in rent payments and utility bills can quickly spiral to unmanageable levels," Dullard told DW.

"As long as markets are closed, inaccessible or unaffordable, food insecurity is likely to remain a concern for many."

Moreover, there are concerns that food insecurity could spike in specific areas, such as prisons. "We are alarmed by recent reports of a COVID-19 outbreak in Sihanoukville prison," said Yu Hah of Amnesty, referring to a large city on Cambodia's southern coast.

"A COVID outbreak in Cambodian jails could be catastrophic from a public health and human rights perspective, given the severe overcrowding and unsanitary conditions which abound in these prisons."