COVID: Indonesian hospitals grapple with shortages as cases surge | Asia | An in-depth look at news from across the continent | DW | 07.07.2021

The spread of the virus after the Eid holiday, coupled with the delta variant, has spurred a new spike in cases. Hospitals are increasingly seeing a shortage in beds and oxygen supplies, and having to turn patients away. 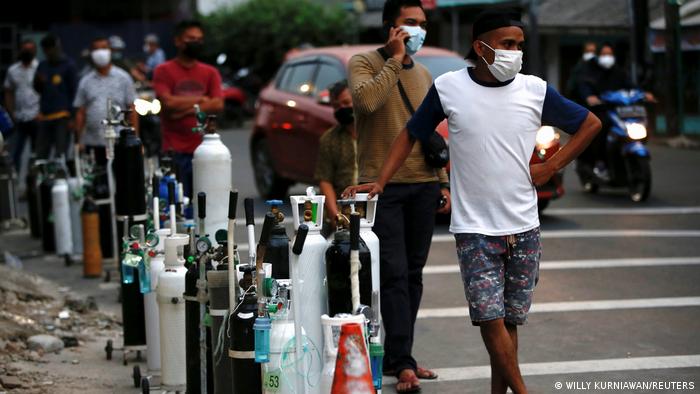 Hospitals are grappling with a shortage in beds, human resources and oxygen supplies

Indonesia's health care system and hospitals are struggling to keep up with an influx of new COVID patients. One of the largest hospitals in Indonesia's Yogyakarta province reported last week that dozens of patients died after the hospital ran out of oxygen due to the large numbers of COVID-19 patients coming in.

With a population of about 270 million, the Southeast Asian country was severely hit by the outbreak after the Eid celebration on May 12 and 13, which saw millions of people travel and gather to celebrate the Ramadan.

That outbreak has been made worse, as infections surge during the spread of the highly transmissible delta variant.

The government announced two weeks of restrictions on public activity on the Java and Bali islands starting on July 3, but experts say the policy doesn't go far enough.

Not enough beds or oxygen

Over the weekend, almost all of the hospitals in Yogyakarta province were full, while oxygen supplies were running low, Sagiran, a surgeon at the Nur Hidayah Hospital, who uses only one name, told DW.

"Yogyakarta has been facing an oxygen shortage over the last five days. Usually for a small hospital like this, we receive at least 20 canisters of oxygen per delivery, but [now] we only get around five canisters. One day, we didn't receive any oxygen supplies at all. So, we must turn away patients and postpone all nonurgent surgeries," said Sagiran.

Meanwhile, other hospitals are building additional tents to accommodate the overflow in patients.

"All medical facilities such as public health centers and clinics have reached their full capacities. Doctors are overworked and we don't have enough human resources because many doctors are infected by coronavirus themselves and have to self-isolate," he said.

In one district, he said, hospitals started hiring medical students to work as volunteers.

He said many people were letting down their guard when it comes to health protocols, resulting in the higher infection rate.

Rini Aryani, a doctor from a hospital in Kudus, Central Java Province, said the bed occupancy in her hospital remained high.

In June, Aryani said, sometimes up to eight people would die on her watch in a single day. Meanwhile, the emergency room was full, with cars queuing in front of the hospital to bring in new patients.

Aryani said family members of patients had accused her of being inhumane for turning patients away.

"It makes me angry. They said we are inhumane because we cannot give them a bed. But the truth is that there are no more beds available, and we don't have enough doctors and rooms to treat them," she told DW.

Because hospitals often reach their maximum capacities and turn down patients, many people with COVID-19 have no other choice than to isolate themselves at home.

'Just the tip of the iceberg'

More than 260 people with COVID died while self-isolating between June and July, according to independent data initiative, LaporCovid-19.

"This is just the tip of the iceberg and must be addressed immediately," Irma Hidayana, of LaporCovid-19, told DW.

The number of doctors and health care workers dying from the virus also continues to grow. According to the Indonesian Doctors Association (IDI), as of June 28, at least 1,031 health care workers died, 405 of whom were doctors. Meanwhile, between February and May 2021, around 61 doctors died, 14 of whom had been fully vaccinated.

Experts warned that the actual number of infections could be significantly higher than the reported numbers because of the low rate of testing, especially in rural areas.

"It is clear that the data shows only around 10% of the actual numbers," Dicky Budiman, an epidemiologist from Griffith University in Australia, told DW.

Without implementing tougher measures, Budiman predicts that the pandemic will reach its peak by the end of July or August.

Only about 32.3 million people have received their first shots, while only 14 million have been fully vaccinated. Meanwhile, the government is seeking to vaccinate more than 181 million by April 2022 in order to achieve herd immunity.

Indonesia has so far secured more than 99 million vaccine doses, she said: "It is enough to fully vaccinate 44 million people, and we will continue to gradually receive vaccines, with a total of 400 million doses."

Indonesia in the grips of a COVID surge fueled by Delta