Andrea Krautkrämer is a nurse in an intensive care unit. Every day, she shares in her patients' battle for health and survival. DW reporter Andrea Grunau followed her for one working day. 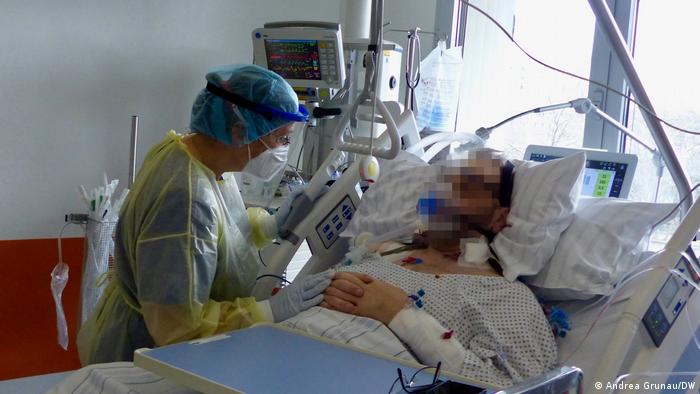 5:45 a.m. Nurse Andrea Krautkrämer arrives at the Marienhof hospital in Germany's western city of Koblenz for the beginning of her shift. She's been up since 4 a.m. Since the pandemic took hold, she's struggled to get enough sleep, she says. She heads for the second floor: the ICU. She's been working here for over 30 years now. These days, she only does part-time. It's constantly getting tougher. Physically and emotionally.

Andrea says she wouldn't cope if she were on full-time. She is, though, at pains to avoid any misunderstandings: "I love my job!" She goes into the changing room and puts on blue PPE: personal protective equipment.

6:00 a.m. There's a large counter in the middle of the ward. It's still shrouded in darkness. From the corridor, you can see the patients lying behind large glass screens. There are 12 beds for people who need intensive care. Eleven of them are occupied. Three of those patients are COVID-19 victims. 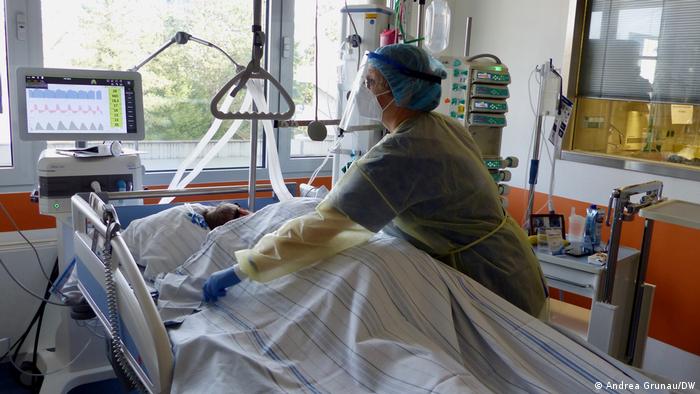 The patients in Beds 1 and 2 are currently both on ventilators. Meanwhile, the man in Bed 4 is "as bad as it gets." That, at least, was the assessment used in the handover from the night shift. When the early shift comes on, they discuss who'll be responsible for the individual patients and their specific therapies.

Andrea Krautkrämer takes charge of the shift and direct responsibility for two patients. On top of that, she will also be giving instructions to a trainee nurse. ICU staff like Andrea usually begin their careers with a course in basic nursing before gathering practical experience in intensive care, which is in turn followed by two further years of ICU training.

First things first: Andrea gets a rapid COVID test before the day can really begin. Patients and their families and friends are also tested. Which is reassuring, says the 54-year-old. Most of her colleagues have been vaccinated. Used sheets and protective gear have to be disposed of carefully

At the bedside of a COVID-19 patient

7:30 a.m. In the buffer zone leading to Room 11, which is occupied by Martin Faber (his name has been changed), she puts on a protective hood, a gown, two pairs of gloves. She also wears a shield over her FFP2 mask. She will be visiting him four times during the course of the day. And each time the procedure is the same: Carefully put on and take off the PPE. And each time, make sure that it is carefully disposed of.

Martin Faber is in his early 50s. He was already suffering from leukemia, says Andrea Krautkrämer. He's been here for three days now. The patient's mother passed away in January — just one bed further down the ward. She, too, was a victim of COVID-19. When the door to the buffer zone is pulled shut, all the noise on the ward is suddenly smothered and replaced by that made by the mechanism of the ventilator.

"Morning, Herr Faber! How was your night?" She says it with a bright smile. "Good," he answers, his voice slightly muffled from the respiratory mask. He's been lying on his stomach for two days to make sure that his lungs are properly ventilated.

The ventilator itself is just one of many different models that are used. The staff has to familiarize themselves with each one. They are designed to monitor the heart rate, blood pressure and oxygen saturation. All supported by infusion devices. 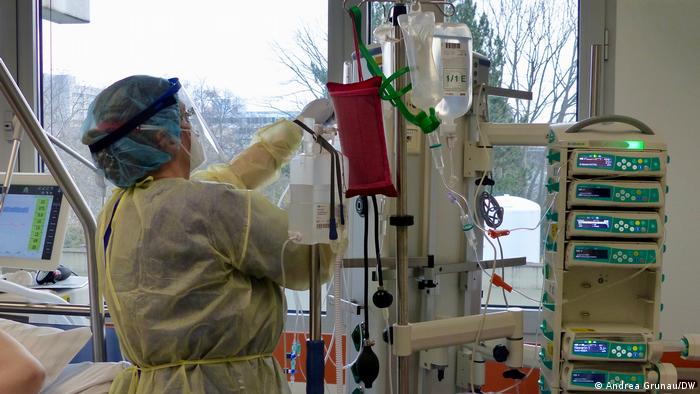 Each ICU patient is hooked to so many machines, it is hard to untangle all the chords

Andrea Krautkrämer removes the ECG electrodes from Martin Faber's back so that he can turn over. She's always got one eye on the control monitors, busily working a complex array of dials and switches even while she's asking if there's anything else she can do for him. She washes his hands gently with a pre-warmed disposable sanitary towel. She changes the bed — sweaty work in the PPE. She checks the infusions. Gives him his medication. Makes sure that the different tubes are all in place.

And all this time, they're chatting about Martin's plans to marry his partner. To do so as soon as possible. And about his cats, who enjoy lying on his stomach. And how they'll be looking forward to doing so again when he gets out of the hospital and goes home.

8:15 a.m. Andrea Krautkrämer lifts the respiratory mask from Martin Faber's face so that he can have some breakfast. There's a sigh of relief: "Oh, that is good!" The ICU nurse takes the opportunity to slip a thin tube into place. It will be used to blow oxygen into his nose. Her patient is eating. And chatting on the phone. So, Andrea Krautkrämer does a bit of tidying up. Again and again, an alarm signal is triggered. He simply can't stop coughing. 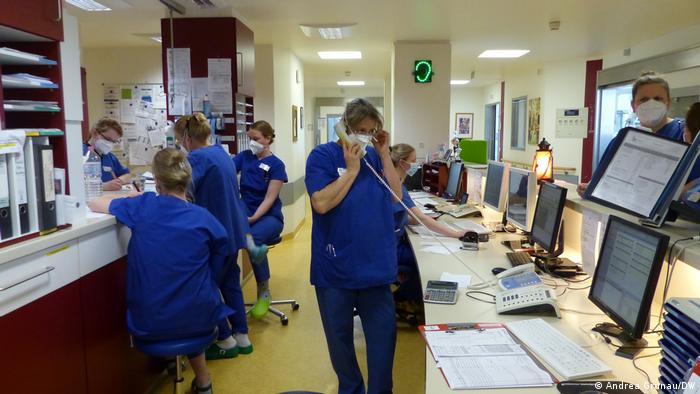 Before she puts the mask back on this face, she administers an inhalant. As soon as she's back in the buffer zone, she gets a call from Martin's partner, who's anxious to hear how Andrea thinks things are going: "Phone any time you want," says Andrea. Friends and relatives can make all the difference for the patients. "They really miss them."

Death is part of life

9:20 a.m. Andrea Krautkrämer turns on one of the lights on the big counter. She whispers: "The patient in Bed 4 isn't going to make it." The therapy has been discontinued. He has two visitors. That's only allowed if someone is close to death. The warm light of the lamp is a signal, "for us all to calm down a little," she explains. "You can't work on intensive care unless you accept that death is part of life."

10:00 a.m. Doctors and nurses have gathered around Bed 1. The COVID patient is in grave condition. An ICU nurse who was supposed to be integrating a new member of staff has spent three hours with him in an isolation room. A feeding tube has been inserted through his abdominal wall. A tracheotomy is used to fit a cannula for ventilation. 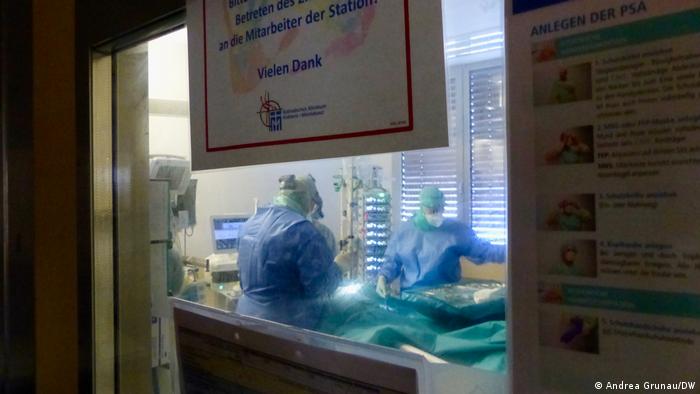 Doctors perform an emergency tracheotomy to fit a cannula for ventilation

Two days later and this patient, too, dies. It's nothing new for Andrea Krautkrämer and her colleagues: "You do everything in your power — and it's not enough. You suffer with every patient. And you hope. But with COVID patients, "it's hard to take because you have no idea where things are going."

This explains Andrea's response both to widespread rallies of people who are playing down the coronavirus threat and to the anti-mask movement: "It makes me very, very angry."

10:15 a.m. Andrea Krautkrämer has some new medication for Martin Faber. And she prepares a blood gas analysis. His blood glucose level is high. She injects insulin. But there's another problem: The respiratory data has dipped. So she consults with the doctor.

Again, Andrea Krautkrämer removes Martin Faber's mask. He wants to show her photos of his cats that he has on his cell phone. She's looks and listens attentively: "Pretty kitties," she jokes, and tells him about her own pets. For just a few minutes, life almost returns to normal. Martin Faber seems relaxed. But suddenly his cough is back to torment him. 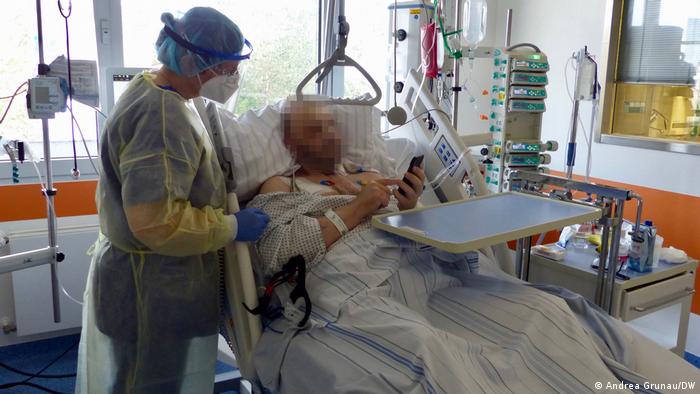 01:15 p.m. The late shift has arrived. After the group team talk, Andrea Krautkrämer hands over each patient to her successor. The two nurses stand outside Martin Faber's room for what seems a long time. They discuss his data, his emotional condition, his hopes and his fears.

After reanimation, another patient died in the same week, Andrea Krautkrämer reports a few days later on the phone. Three deaths a week is pretty much average, she says. "If things go badly, then it might be three a day." It really pushes medical staff to their limits, she says: looking after people who are seriously ill, all the work that's involved, the fear of being infected. That's a lot of things at once: "It sucks out your strength."

The doctors advise Martin Faber not to wait a moment longer with his wedding plans.

A call is made to the local registry office. With success: A registrar comes to the hospital. The hospital pastor, Martin Saurbier, has ordered some flowers. Andrea and the rest of the team have sparkling wine. There are even some wedding decorations. The screen to Room 11 is covered with little wooden hearts and festive ribbons. Paper lace is stuck onto the groom's protective clothing. 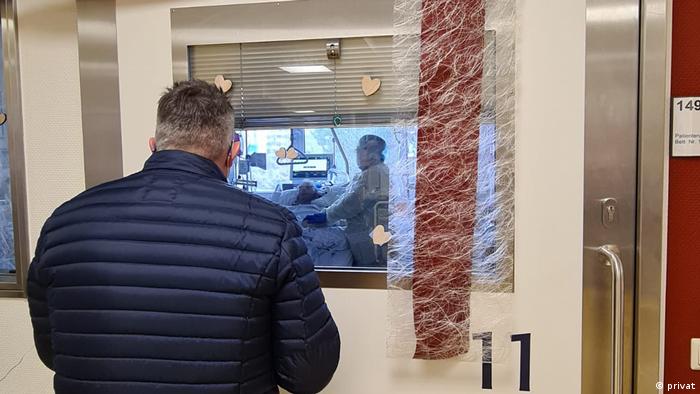 The registrar uses the hospital intercom to ask the couple if they are ready to make their vows. They are. And there is not a dry eye, Pastor Saurbier tells DW.

It is the same Pastor Saurbier who so recently accompanied Martin Faber's mother on her deathbed. The pastor also reported on how, initially, Martin Faber's health had picked up. But then things again took a turn for the worse. The next time Andrea Krautkrämer was on the ward, he needed dialysis and had to be intubated. One week after the wedding, said Pastor Saurbier, he was dead.

The plan had been for Martin Faber's mother to be buried when her son came home from the hospital. The family has now asked the pastor to bury mother and son together.