COVID: Nurses and carers are the heroines of the pandemic | Germany | News and in-depth reporting from Berlin and beyond | DW | 11.03.2021

COVID: Nurses and carers are the heroines of the pandemic

The coronavirus pandemic has put extra strain on nurses and carers in Germany. Both roles tend to be filled by women, who earn substantially less than their male counterparts. 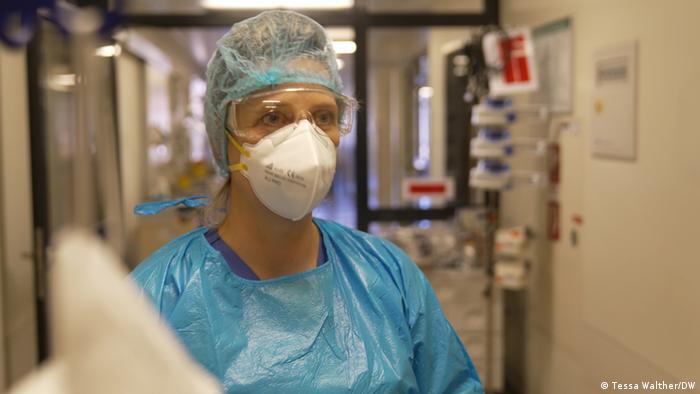 Nurse Katrin Berger in Berlin is passionate about her job, despite the poor pay and difficult working condiditons

Katrin Berger can put on her protective gear in a matter of seconds: disinfectant, plastic medical hood, FFP3 mask. The nurse works in the intensive care unit at the Helios hospital in Berlin-Buch. She's been there 26 years. These days, she's usually surrounded by machines, pipes, medication — and many fellow women.

They have been working flat out for a year now, round the clock, treating coronavirus patients.

"Firstly there's the physical demands, which are enormous. But the psychological component plays a large role too," says the 46-year-old. It's routine for her to deal with severely ill patients, she says, but what's new is that those patients present a contamination risk to her as well.

A few kilometers away, Dörte Herrmann strides rapidly along the corridor of the Volkssolidarität care home in Berlin. She's a carer and a team leader, and her team consists almost exclusively of women.

"Yes, we have a lot of female colleagues," she says. And she suspects that salaries play a large role in that imbalance. "If this were a male domain, then the women would also earn very differently!"

Call to appreciate work done by women in nursing

In the care sector 90% of staff are women, according to the German Federation of Trade Unions. This imbalance is particularly stark in old people's homes. Yet despite being in a massive majority, female care workers earn 10% less than their male colleagues on average, even in similar roles.

On top of this unequal pay, they must contend with poor prospects of promotion.

Carers work unsociable hours. Dörte Herrmann regularly worked nights for more than 10 years as part of her duties. Berger, the 26-year veteran, still does those shifts.

The combination of an increased workload and poor pay has taken its toll. Figures from the Labor Ministry this week showed that just in the first months of the pandemic, between April and July, an estimated 5,124 nurses and 3,885 care home workers had quit their jobs.

Berger says she was looking forward to the extra funds made available, dubbed the "corona bonus," for front-line hospitals and facilities, but the extra money has yet to arrive at her hospital. But she believes that nobody would do her job just for the money anyway.

"The female nurses, in particular, are always enthusiastic and put their heart and soul into their work. Otherwise, it wouldn't be possible to do the job," she says — before adding that "a higher salary is always nice." 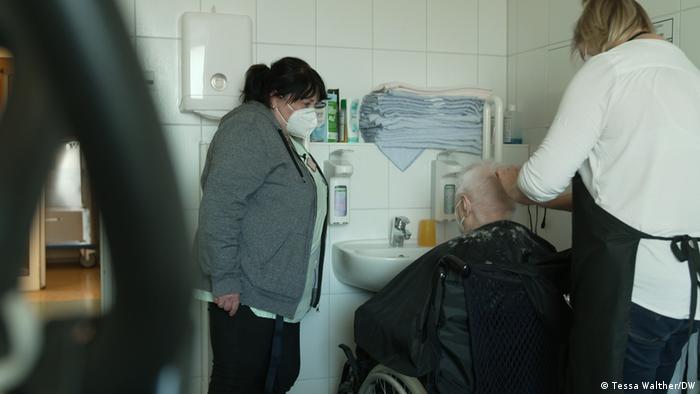 Germany's overall gender pay gap is among the highest in the European Union. The health and social care sectors are among the most imbalanced: pre-tax hourly rates for women are, on average, 25% lower than that of their male colleagues. Authorities say a large part of this gap can be explained by structural factors: many female-dominated work environments are poorly paid, and women working in them often don't reach better paid, more senior positions.

Herrmann was no stranger to this phenomenon. Her husband is also a care worker and for a long time earned more than her. But now, as team leader, she's caught him up, she says proudly.

But perhaps what matters even more to both women than remuneration is how much society values their work. Herrmann says she's become accustomed to this lack of respect in recent years.

"Often, we're seen as the ass wipers. Nothing more," she says.

When people were clapping for care workers on their balconies at the start of the pandemic, she says she suddenly felt seen. Berger says the pandemic has shown people the importance of her work.

But the applause faded long ago. For many people, Hermann says, they're seen as just the care staff, or the cleaning staff, or the kitchen workers. But if just one of those workers is missing, suddenly her whole team can't function.

"I'd like women in this line of work to at least stop making themselves out to be less important than they are," she says.

In hospitals and care homes, they care for others. But who helps the helpers cope with high numbers of deaths, burnout or the fear of becoming infected with COVID-19? In Germany, they can call a special helpline.