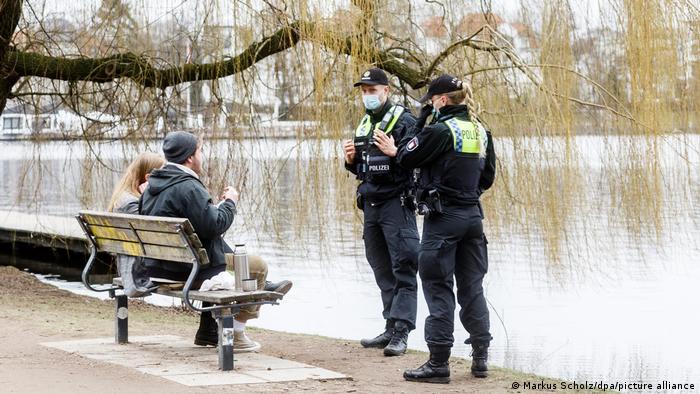 "We have clear signs: The third wave in Germany has already begun," said Lothar Wieler.

Thursday marks one year since the World Health Organization (WHO) declared a global pandemic.

Wieler's comments came as the RKI recorded 14,356 new infections in the past 24 hours on Thursday, an increase of more than 2,400 over the prevous Thursday.

Wieler described the vaccination drive as a race against the mutating virus, but was hopeful that 80% of the population could become immune to coronavirus by fall. Until then he considered continued hygiene measures to be necessary.

Here's an overview of other major developments around the world

The Italian government is considering further tightening movement restrictions in order to prevent the spread of COVID-19, local media has reported.

Some of the new measures include implementing the strictest rules on movement in areas with a seven-day incidence of 250 people per 100,000. The country as a whole was at 195 at the end of February.

Denmark has suspended the use of AstraZeneca COVID vaccine. A number of patients developed blood clots after receiving the shot, health authorities said.

Belarus has registered several cases of the variant first identified in the UK. The Health Ministry said the disease had been detected in passengers travelling from Poland, Ukraine and Egypt.

Brazil recorded more than 2,000 COVID-related deaths for the first time on Wednesday. The health ministry reported that some 2,286 people had died from the virus in the past 24 hours, bringing the country's total death toll to 270,656 since the pandemic began.

South America's largest country has recorded 11.2 million infections — only the US and India have recorded more.

The health system in many cities has collapsed as the country has been ravaged by a particularly contagious variant. President Jair Bolsonaro has continued to play down the pandemic and to reject implementing restrictions.

The southern US state of Texas ended its mask mandate and capacity restrictions on restaurants and businesses on Wednesday.

The Texas Rangers baseball team plans to become the first major sports team in the US in a year to welcome full capacity crowds. The Rangers will play exhibition games on March 29 and 30 and their first home regular season game on April 5, all open at 100% capacity in the 40,518-seat Globe Life Field.

Meanwhile, US President Joe Biden has signed a $1.9 trillion economic stimulus bill ahead of giving a national address where he was set to urge "hope" on the first anniversary of the WHO describing the coronavirus outbreak as a pandemic.

Biden called the American Rescue Plan "historic" as he signed off the piece of legislation.

The bill, passed by Congress earlier this week, hands out $1,400 payments to most US citizens, helps the unemployed, expands public health care and ramps up funds for vaccinations.

The new figure represents an improvement on the 95% effectiveness claimed by the company at the end of last year after clinical studies. The data also revealed that the vaccine was 94% effective at preventing asymptomatic infections.

The Australian government revealed a A$1.2 billion ($928 million, €779 million) plan to support local tourism and airlines affected by the pandemic.

The government will subsidize 800,000 tickets on domestic flights to 13 destinations that usually depend on international tourists' support, and will offer inexpensive loans to small tourism operators.

Jordanian Foreign Minister Ayman Safadi told DW his country was not receiving nearly enough doses from the COVAX initiative to innoculate its population. He made the comments as he met with his German counterpart Heiko Maas in Berlin. Read the full story here.

One year into the pandemic, youths struggle to cope after months of missed school, disrupted social lives, and protecting loved ones. In Belgium, teen mental health services are now overwhelmed. DW visited a hospital for the virus' collateral victims. Watch the full report below.

Lothar Wieler called for caution over the highly contagious B117 variant. The strain makes up more than 40% of new cases, compared to about 6% of cases four weeks ago, he said.