Critics say Brazilian President Bolsonaro played down the coronavirus for too long. A lack of central coordination to fight the pandemic has led to a huge number of deaths, which experts say were unnecessary. 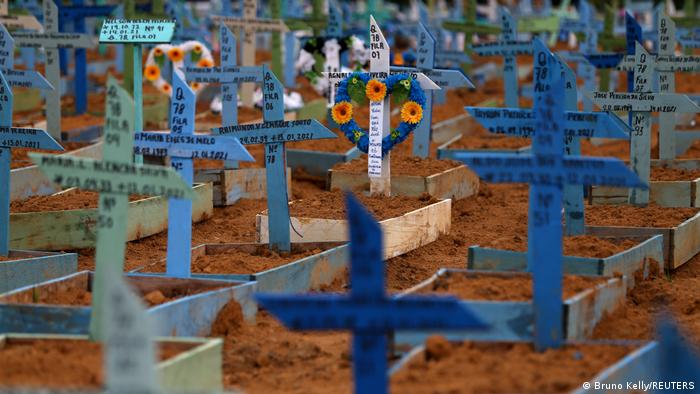 Some 250,000 people have died of coronavirus in Brazil

Brazil recorded its first case of COVID-19 on February 26, 2020, in a 61-year-old man from Sao Paolo who had been infected on a trip to Italy. The first death, of a 57-year-old domestic worker named Rosana Aparecida Urbano, was registered on March 12.

A year later, over 250,000 people have died of COVID-19 and some 10.3 million have been infected. At least according to the official figures. Experts assume the real numbers are much higher, but the lack of testing makes it difficult to confirm.

And yet even the official figures are shocking enough. Only the US and India have had more cases, and only the US has seen more deaths. In January, Australian think tank the Lowy Institute ranked Brazil lowest in a comparison of the performance of 98 countries in managing the COVID-19 pandemic.

Many blame President Jair Messias Bolsonaro. At the beginning of the global pandemic, he announced that the coronavirus was nothing more than a "little flu" or a "cold." He claimed repeatedly that China had launched an attack on him and his US counterpart and idol Donald Trumpby spreading the virus. One of his initial responses was to organize a collective prayer session in the garden of the president's official residence. When he himself was later infected, he took hydroxychloroquine, which he and Trump had promoted as a treatment despite the lack of scientific evidence.

Ethel Maciel, an epidemiologist at the Federal University of Espírito Santo (UFES), believes the failure to implement preventative measures from the center was catastrophic: "During the first wave, the government was of the opinion that a lockdown or wearing masks were totally unnecessary," she told DW. "Gradually, the lack of central coordination led to individual states implementing their own measures."

As well as the chaos of the attempts to curb the spread of the virus, there was also chaos with regard to the purchasing of medical equipment. It led to the firing of two health ministers, who refused to follow Bolsonaro's path.

The president refused to take any measures that would have a negative impact on the economy: "We're all going to die one day," he said. 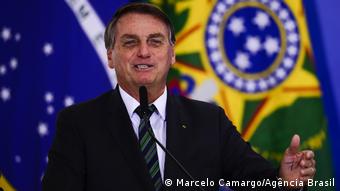 President Jair Bolsonaro played down the coronavirus for a long time

Eventually, a Supreme Court ruling allowed state governors and mayors to implement measures independently. Ever since, there has been a blame game across the country with the government, state governors and municipalities accusing each other of being responsible for the crisis.

"In the course of the crisis, it became clear how dependent we are on foreign countries, whether it's about procuring masks, ventilators or syringes," explained Maciel. "Today there is still a politicization between the central government and the states when it comes to the procurement of vaccines." For a long time, Bolsonaro refused to accept the vaccines that the state of Sao Paulo had bought from China, apparently unwilling to hand state governor, and Bolsonaro's arch-rival, Joao Doria the triumph of supplying the whole of Brazil with a Chinese-made vaccine.

Bolsonaro placed his faith in the British-Swedish AstraZeneca vaccine, which is currently suffering supply problems and rejected other offers, such as that of Pfizer/BioNTech, who wanted to supply up to 70 million doses in December. "Our vaccination campaign could have looked completely different by now," said Maciel. As it stands, only about 3% of the population has been vaccinated and the immunization efforts are stagnating across the country because of a shortage of vaccines.

Health Minister Eduardo Pazuello, a general and supposed logistics expert, has also become a problem. He could not prevent the shortage of oxygen in the hospitalsof the Amazonas region, which led to an inordinate number of deaths in January. Moreover, he is now under investigation because of his handling of COVID-19 and his role in promoting the nationwide distribution of the unproven drug hydrochloroquine. "Just when we are in the midst of our greatest health crisis, we are run by people who don't know what they're doing," Maciel lamented.

Political expert Marco Aurelio Nogueira was less quick to judge: "The coronavirus took everybody, including Bolsonaro, by surprise," he told DW. "Even if someone else had been president, the virus would have caused huge damage." He pointed out that it was difficult to implement even the simplest measures against the spread of the virus. "Hygiene and physical distancing are already complicated in a country like ours. Most of the population has to go to work, only a few can work from home. The government cannot be blamed for that at all."

But he did not let the government off the hook completely: "It did not take this illness seriously and Bolsonaro even trivialized it either because he is a complete fool or for ideological reasons." Nogueira argued that the president was at pains to persuade people of the illness' supposed harmlessness in order to keep the economy going. "At the same time, the government showed a complete incompetence to coordinating measures. And Health Minister Pazuello just made the tragedy even worse. He has no expert knowledge, no communication skills and no political instinct."

Bolsonaro's approval ratings have fallen to below 35%, which is still surprisingly high but may be down to the fact that a third of Brazilians are being kept above water with subsidies. However, the president's re-election at the end of 2022 is far from certain. "The economy will not be back on its feet by the elections […] because the vaccination campaign will only be finished next year," predicted Nogueira.