COVID vaccination triggers hope and skepticism in Germany | Germany | News and in-depth reporting from Berlin and beyond | DW | 28.12.2020 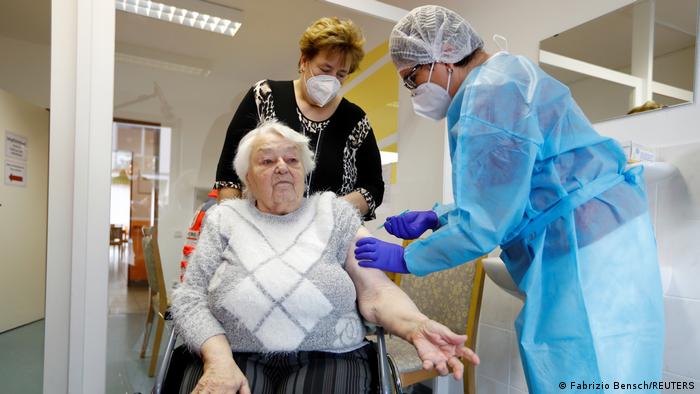 Brandenburg's state health minister, Ursula Nonnemacher, was on hand for the roll-out of the vaccine in the town of Grossräschen.

As a Red Cross worker carried the white polystyrene box containing the precious cargo from the refrigerated truck and past police vehicles into the nursing home, she spoke of a ray of hope on the horizon.

Grossräschen is one of the main COVID-19 clusters in Brandenburg, the federal state surrounding the German capital, Berlin. In this town with a population of about 100,000, the average daily rate of infection is over 500. Of all the German states, only Saxony has a higher incidence.

Nursing homes here have adopted strict precautions. Only close relatives who have tested negative for the virus are allowed to visit residents. But that hasn't stopped the disease from spreading. Therefore it is here that the new vaccine has been eagerly awaited.

One person holding out hope is Ruth Heise, an 87-year-old resident. She is one of the first people in the home to receive the vaccine — and is brought out in a wheelchair to receive the injection in front of a crowd of journalists. She is also one of the few who say they are not afraid of the effects.

Only 12 of the home's 70 residents have applied to receive the jabs on the first day. That's a measure of the challenge facing health authorities. Hubertus Diemer, head of the Red Cross in Brandenburg, says, "It's about trust and convincing people to get vaccinated."

The take-up rate is somewhat higher among staff. About half of those available have applied to receive the vaccine. "There is considerable skepticism," admits the director of the nursing home, Bianka Sebischka-Klaus. One of the problems she identifies is the speed at which developments have taken place. "When we started informing people of the plans, the vaccine had not even been approved." 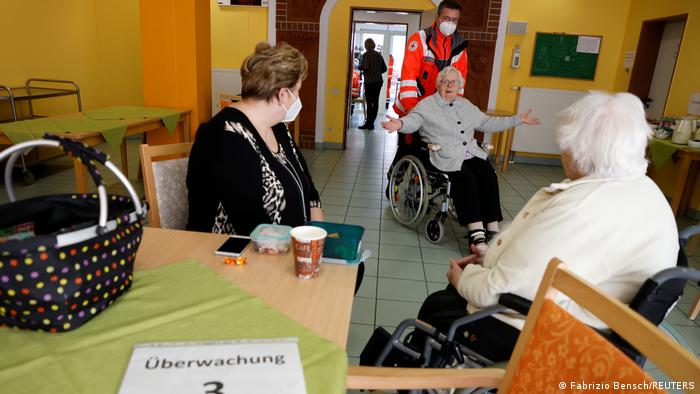 Sebischka-Klaus says it is vital to be patient, to answer people's questions and take their doubts seriously. State Health Minister Ursula Nonnemacher agrees, saying it is important not to put people under pressure and to give them "time to discuss their decisions with their families. Sometimes legal guardians have to give their approval and many relatives have come along to accompany the elderly for their vaccination." The health minister adds that it will take months for enough of the population, an estimated 60%-70%, to be vaccinated to achieve herd immunity.

This estimate applies roughly to the entire country. Most vaccination centers are ready to start work, as are the mobile immunization teams slated to distribute the vaccine to nursing homes. But there haven't been enough deliveries yet.

Each vaccination requires two doses administered 21 days apart. As the Social Democrat (SPD) health spokesman Karl Lauterbach points out, the current plans would immunize just 5% of the population by mid-March 2021. He is calling for an urgent increase in production: "Time is running out. The virus has already mutated. We must vaccinate as many people as possible as soon as possible before the virus develops its own immunity to the vaccine."

One further ray of hope is the expectation that the European Union is on the verge of approving another vaccine, produced by the company "Moderna". It has the advantage of a less demanding cooling chain than the BioNTech vaccine, which has to be stored at extremely low temperatures and quickly becomes ineffective if the chain is broken.

The cooling chain is not the only "major organizational challenge" faced by the health authorities when it comes to distributing the BioNTech vaccine, says the head of Berlin's "Kassenärztliche Vereinigung" doctors' association, Burkhard Ruppert: "It is packed in sets of five doses rather than individual vials. Because it can only be kept for a certain length of time, we will have to organize it carefully so that we do not have to throw out any of the vaccine."

Some 60 mobile vaccination teams have been assembled in Berlin. They are slated to visit the capital's nursing homes in the coming weeks, administering 50 vaccines each per day. Six big vaccination centers have also been set up, the first of which started work on Sunday.

Brandenburg, the area surrounding Berlin, is still playing catch-up. The cities of Potsdam and Cottbus each have a vaccination center ready to go but there are plans for a total of eleven by the end of January.

By then, Ruth Heise should be immune to COVID-19. She is due to get her second dose on January 18.

BioNTech CEO: 'The science we did was important'

In an exclusive interview with DW's Konrad Busen, BioNTech CEO Ugur Sahin explains how the firm will respond to a new virus variant and why he hasn't been vaccinated.

What do we know about the coronavirus?

Nearly a year has passed since COVID-19 became known worldwide. Since then, researchers have discovered much about the virus and have made progress combating it. Here are the most important points.