COVID: A focus on protecting the elderly

As Germany braces for a hard lockdown, the southern city of Tübingen is focusing on protecting high-risk groups and on carrying out as many tests as possible. 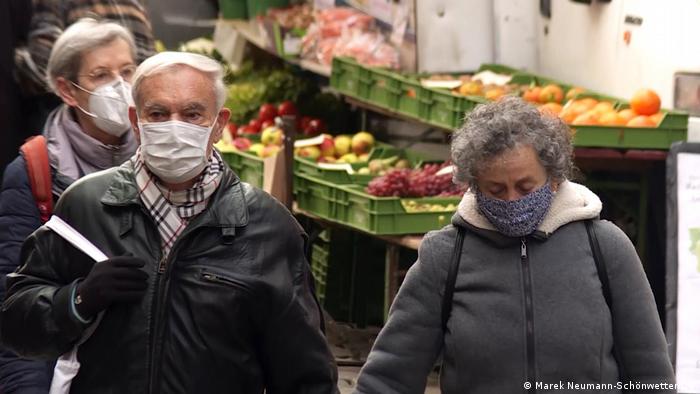 Anyone visiting the Pauline Krone Home in the north of Tübingen, a university town in the south of Germany around 40 km (25 miles) from Stuttgart, is greeted by an enormous sign on the door.

"Visiting your loved ones? Be safe!" it reads. Lying next to it, there is a bottle of disinfectant and a list where visitors need to sign in.

Almost one hundred elderly people spend their final years in the Pauline Krone Home, all of them at high risk of being infected with the coronavirus. Since the end of October, there has been another hygiene measure in place: Every visitor can be tested for COVID-19 for free. 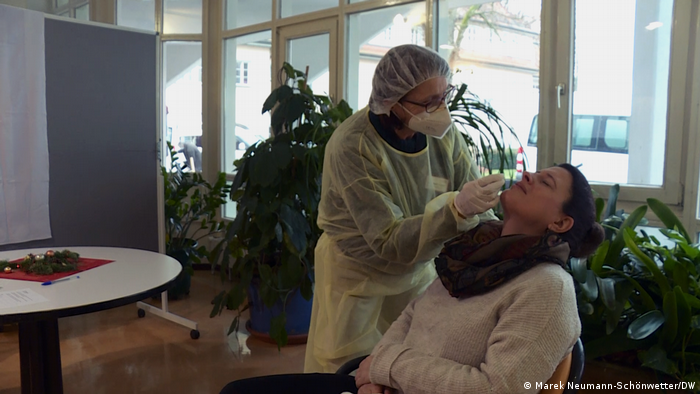 "It tickles a little at first," the nurse warns before swabbing a visitor's nose. "And at the end it is not exactly comfortable." Fifteen minutes later, the result is already available, and a visit to the senior citizens in the home is as risk-free as possible. Between 30 and 40 people take advantage of the service every day — and that number is growing steadily.

The tests provide security — and allow visits to continue to be permitted despite the sharp rise in the number of infections in the region over the past few months.

"Of course, this is very good for maintaining social contact for the elderly here," says nursing director Holger Beidel.In the spring, during the initial lockdown, it was a different story. "We found that many residents really suffered psychologically as a result."

It is not only in nursing homes but also in the rest of the city, that elderly people are given extra protection. Special shopping times are reserved for seniors to help avoid contact, and discounted taxi rides and free masks are on offer for those in the high-risk group.

The plans were the brainchild of Mayor Boris Palmer. "I simply looked at the numbers from a mathematical point of view," he tells DW. "It was clearly evident as early as April that the risk of dying is borne by people over 70, so we have to protect them." In this way, intensive care units would also be saved from overload. The city has spent half a million euros on this. 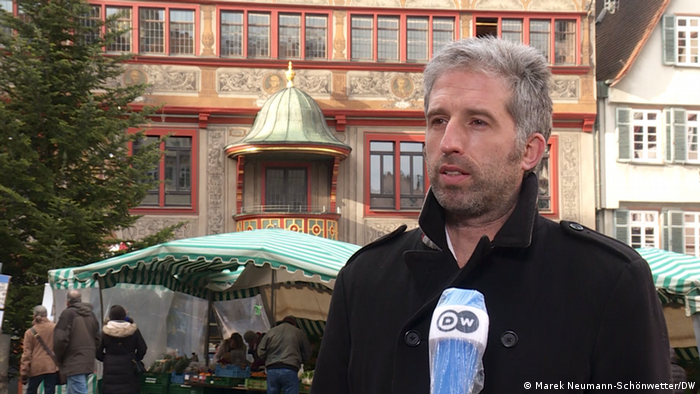 So far, it looks like the plan is working. In recent weeks, infection rates among the city's seniors have been comparatively low. Looking for ways to reduce the rising death toll, all eyes were on the southern German city. Mayor Boris Palmer is pleased with the results — after he came under fire at the beginning of the pandemic with a public statement that many took to be hostile to the elderly.

Early in the year, during the first coronavirus wave, the Green party politician had called for the elderly to isolate at home for three months, while younger people returned to work. His hope was to create herd immunity among the younger population and therefore slowly allow seniors to return to public life.

"I phrased what I wanted to do very poorly at the time, and received death threats for it," he remembers. "So it is good to get some recognition that you've done something right."

The people of Tübingen are also full of praise for their mayor. "Now I wear this mask that Mr. Palmer sent me in the mail, and it's always in the car so I don't forget it," says one passer-by. It's a nice gift to give to older people like her, she says.

In early November, the city mailed FFP2 masks to everyone over 65. It also put out an appeal to ask younger citizens to stop shopping between 9:30 a.m. and 11 a.m. This time slot was to be left open to those in COVID-19 risk groups.

One elderly man came to the central market place in a discounted taxi to buy food. "I think it's great and I use it whenever I need to go anywhere," he says.

Of course, everyone still needs to take some individual responsibility, one woman. Points out "But I still think that the measures that Tübingen has introduced are very good."

But 100% protection is not possible even here. A recent outbreak at a hospital saw several seniors infected. At least one apparently had to be transferred back to a nursing home. But Mayor Palmer hopes that thanks to the number of tests being carried out, the worst can be avoided.

"Without these measures, we would have definitely noticed the infections much later," he admits.

One thing is clear: as the number of infections rises throughout Germany, so does the risk in Tübingen. To ensure that the city's residents have the safest Christmas possible, the city has already come up with its own strategy for the holidays: A testing station will be set up in the market square well before Christmas. Anyone who wants can be tested for coronavirus there — to be on the safe side before visiting loved ones.

Nearly a year has passed since Corona became known worldwide. Since then, researchers have discovered much about the virus and have made progress combatting it. Here are the most important points.