Boris Palmer: the odd Green out

Tübingen Mayor Boris Palmer has turned heads with his provocative thoughts on refugee policy - including in his own party. What some consider populist he sees as pragmatic, and he'll continue to provoke. 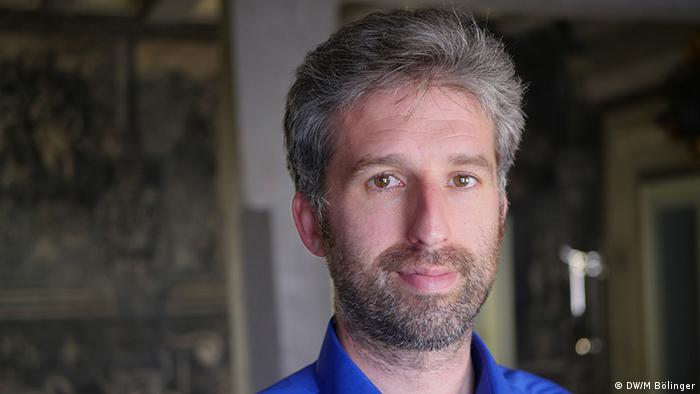 Perhaps Boris Palmer really doesn't understand the commotion he sometimes causes. In early August, the mayor of Tübingen sat down for an interview with the Stuttgarter Zeitung. His response to a question about violent-prone refugees stirred up a storm of backlash.

"Even in Syria, there are areas of the country not at war," Palmer said. "How do I explain to a victim's family that the offender is still in Germany, despite how aggressive he was? 'It's unsafe in Syria' is hardly a satisfactory answer."

Germany's national newspapers went with the headline: "Palmer wants to deport Syrians." In light of the scale of the Syrian civil war, that would be controversial demand even for conservatives. Palmer is, however, a member of the Greens, a party that would never make, let alone think of, such a proposal. "Typical Palmer nonsense," said Simone Peter, co-chair of the Greens. Niels Annen of the center-left SPD called Palmer the "Greens' Donald Trump." The party's other co-chair, Cem Özdemir, even suggested that Palmer go to Syria and see the situation for himself. No one from his own party stood by him. Only the right-wing populist party, Alternative for Germany (AfD), congratulated him.

If his goal was to get as much attention as possible, Palmer outdid himself.

DW: Mayor Palmer, do you like to be provocative?

Boris Palmer: In certain situations, yes. But this topic is much too sensitive. Provocation isn't at all my intention, but something else entirely. I don't want to beat around the bush. Or in political jargon: I don't want to "Merkel" my way through problems.

The Boris Palmer, who is wearing a blue shirt and sitting in his lime green-paneled office, doesn't seem like a person who enjoys the reactions to his comments. There's no twinkle in his eye, much less a smile on his face. Palmer speaks in all seriousness, focused - perhaps a touch tense. His eyes are often fixed on the microphone in front of him.

Palmer: These accusations are painful and unfair, I think. And overblown.

DW: Are you still in the right party?

Palmer: I'm a Green through and through. I haven't given up on the goals that steered me into politics. However, integration is a task I see as much bigger and more difficult, which makes me more skeptical than many Greens.

His argument usually begins with a concession, and then turns back to a defense of his position. Palmer has been playing the role of the odd man out in his party since last year when the refugee crisis hit a turning point in Germany. From early on, he was publicly warning of the dangers of Angela Merkel's "we can do this" pledge. He's called for better border security and a limit to the number of asylum seekers in Germany. This is taboo for a party that stands with refugees and migrants as a core value and supported Merkel's open-door policy as if it were its own. 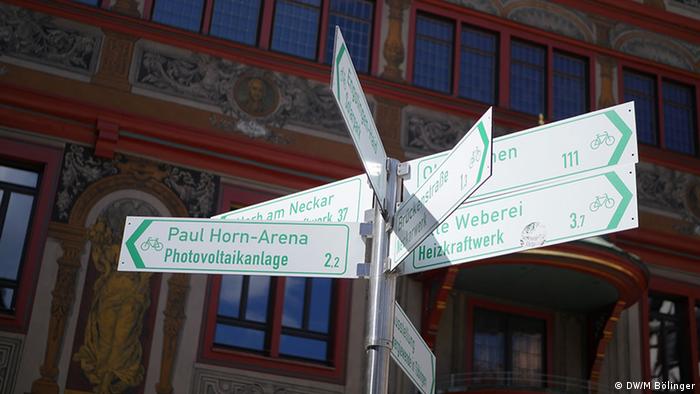 The Greens govern the city: Signposts outside the Tübingen city hall

Palmer has been Tübingen's mayor for 10 years. It's a picturesque city. Old willow trees line the Neckar River that flows through it. Renovated medieval buildings are packed in rows one after the other. Tübingen's green signposts are a nod to the party in power. In addition to the historical sights, there are solar panels and an exhibit, "Energy transformation in Tübingen." The Greens here are more environmentally-oriented than elsewhere in the conservative state of Baden-Württemberg, and the party is more conservative and more middle class than elsewhere in Germany.

Palmer emphasizes that he wants to make integration for newcomers possible. The city is building apartments for more than 1,000 refugees, he said. It's hoping for small, decentralized units rather than hastily put together structures – a better solution in the long-term, even if it means refugees have to wait longer in mass refugee centers. This fits with Palmer's realism, which prefers identifying problems and finding sustainable solutions for them, rather than going on impulse and ideology.

Palmer: Actually, we don't have more refugees coming to us. Border checks are in place. We're finally getting the necessary funds. These are all demands that I made six months ago and for which I was criticized.

There were many articles about Palmer in the German press following the Syria interview, when the reaction was strongest. Some pointed to his family history: Palmer's father was known regionally as a rebel, who once showed up with a bucket of concrete when he discovered the streets hadn't been properly constructed. He spent 18 months in prison for, among other offenses, insulting the police.

Palmer: In comparison to my father, I'm quiet, calm and level-headed. However, someone who has visited his own father in prison for expressing his opinions is going to put up with it the leader of his party says something is nonsense.

Except Palmer isn't being accused of stubbornness. On the contrary, the Tübingen mayor is considered by some in his party as an uninhibited populist who is stoking resentment and is using the mood to drive politics. Demanding a harder line against foreign criminals is a classic populist position as far as the Greens are concerned. Palmer himself says there's no evidence to support crime being higher among refugees. Nevertheless, this is not the first time he's made headlines on this matter. 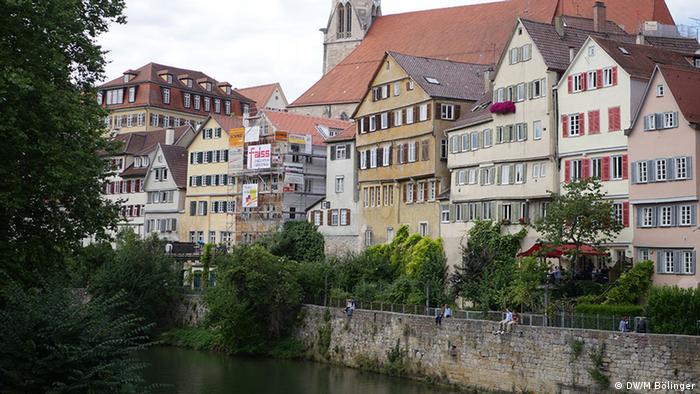 Palmer: Five years ago I would have rejected this argument. However, now we have a million refugees in the country – 20 times more than five years ago. So the risk of being a victim of refugee violence is 20 times higher. People notice that. Every week, there's a report in the newspaper about a violent refugee somewhere nearby.

DW: Why then differentiate between criminal refugees and other criminals?

Palmer: Those who have been victims of violence will ask why someone who comes here to seek protection from violence is then able to carry out acts of violence here, and there's no protection against it.

He backpedals on the Syria question a bit, but then adds that he in no way "demanded" Syrians be deported. He was simply pointing out that the Geneva Refugee Convention allows for deportation of criminals, even to war zones. He therefore expects individual cases to be quickly assessed in this regard.

DW: Mayor Palmer, do you regret your statement?

Palmer: I think the reaction shows that I chose a formulation ripe for misinterpretation. So much so, many are under the impression that someone is willing to accept the death of people. However, no, I see no reason to take back what I actually said.

Once again, a concession followed by a defense of his position. Shortly thereafter, he wrote an op-ed for the conservative newspaper, Die Welt, under the headline, "I stand by my opinion."

The Green party scored a resounding victory in Baden-Württemberg, but it is struggling for relevance elsewhere. Now, it faces a dilemma between following a more conservative course, or sticking to its leftist roots. (15.03.2016)

Three states will vote in March. No party is currently leading. But one side is already patting itself on the back. And the others are getting increasingly nervous. That's not a good sign, DW's Marcel Fürstenau writes. (15.02.2016)

The university city of Tübingen