Greens face rightward shift despite victory | Germany | News and in-depth reporting from Berlin and beyond | DW | 15.03.2016

The Green party scored a resounding victory in Baden-Württemberg, but it is struggling for relevance elsewhere. Now, it faces a dilemma between following a more conservative course, or sticking to its leftist roots. 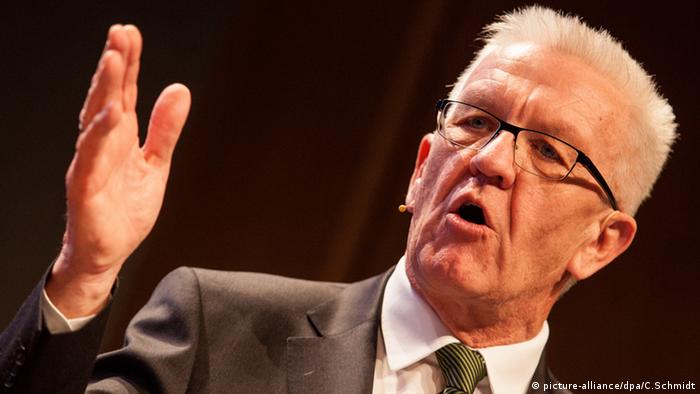 Winfried Kretschmann doesn't have many options left. Baden-Württemberg's much-loved state premier, who led the Green party to their first ever outright victory in a German state election on Sunday, is almost certainly facing a coalition with the center-right Christian Democratic Union to continue governing the state.

The "green-black" coalition is Kretschmann's last realistic choice after his preferred partners, the Social Democrats (SPD), failed to muster enough of the vote to push the center-left coalition he ran for the past five years over the line to a majority in parliament. As the Free Democratic Party (FDP) - re-born as anti-refugee party - has ruled out entering a three-way coalition with the Greens, Kretschmann must now stomach a conservative shift in the government by working with the CDU.

Kretschmann himself, ever the diplomat, has invited representatives from the CDU, the SPD, and the FDP to sounding-out talks on Wednesday morning, but these seem to have been headed off by the intransigence of the other parties. 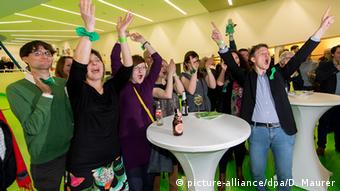 The Greens scored a huge victory on Sunday, at the expense of the CDU

Baden-Württemberg's CDU leader Guido Wolf, meanwhile, briefly hoped to tempt the Social Democrats into a right-of-center coalition with the FDP (with him as state premier), but that notion appears to have been shut down by his SPD counterpart Nils Schmid, who pointed out that the Greens' resounding win meant that Kretschmann must lead the next Baden-Württemberg government. "Anything else would be to dismiss the will of the voters," he said.

But an alliance between the Greens and the conservative CDU is not necessarily an easy fit. They are certainly not natural bedfellows - the CDU's Christian conservative background clashes awkwardly with the counter-culture environmentalism that the Greens emerged from in the 1980s. The coalition has functioned at a state level before, in Hesse and Hamburg, but never with the Greens as the dominant partner.

In recent years, however, as the old 1980s Green party voters have grown older, there has been some demographic overlap between the two parties, as both do well with more affluent middle classes. Kretschmann has proved instrumental in bridging that gap, at least in his corner of Germany.

Nevertheless, Boris Palmer, mayor of the Baden-Württemberg city of Tübingen, took to national radio on Tuesday morning to warn that the CDU would need to alter its tone if the two were to work together - primarily, he pointed out that the conservatives' local leader Guido Wolf would have to take back his remark that he would only enter a coalition with the Greens if the CDU finished the stronger party.

Over the past five years, Kretschmann's government has had to take a lot of flak from the CDU, particularly over its handling of the refugee influx. The Christian conservative party built its election campaign on an anti-refugee policy, which left them often in opposition to Merkel - while Kretschmann counter-intuitively defended Merkel, praising her "crisis management" and even going so far as to claim that he prayed for her health every day.

Judging by Palmer's interview, the election campaign topped off five years of bad blood between the parties. "Even if Mr. Wolf takes back that statement, then there are certainly difficulties on a personal level, because in the last five years the CDU was not exactly constructive in the state parliament; instead, it was often a carping opposition," Palmer said.

What now for the Greens in Germany? 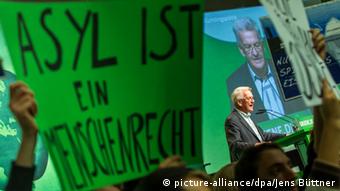 Kretschmann has faced internal opposition over his strict refugee policy

In fact, Kretschmann's victory and the prospect of a shift into the political center puts the German Green party in an awkward position. At a national level, the party has been struggling to regain relevance following a disastrous general election result in 2013, when it ended in fourth place behind the socialist Left party. In Sunday's other two elections, in Rhineland-Palatinate and Saxony-Anhalt, the party only just cleared the five-percent hurdle that guaranteed a place in the state parliaments.

As a result, the German Greens are facing the dilemma of either abandoning their roots to become a kind of environmentalist adjunct to the conservatives, or a more leftist opposition party. Kretschmann's success in the Baden-Württemberg has partly been down to a stricter asylum policy than many core Green voters would like - backing Merkel's policy has meant backing many measures that his own party was supposed to oppose, such as extending the number of "safe" countries of origin to include other Balkan states, replacing cash for refugees with non-cash benefits, and speeding up deportations despite legal objections.

In all such matters, Kretschmann has forged his own independent path, and succeeded - despite, rather than because of, the Green party's policies. Now one of the party's former leaders, Jürgen Trittin, is even touting him as a possible chancellor candidate for the Greens at next year's national election.

The insurgent Alternative for Germany (AfD) have made serious gains from a standing start in the three state elections. CDU candidates who'd distanced themselves from Angela Merkel's refugee policies fared the worst. (14.03.2016)

Here in Germany, reporters called it a "black election Sunday," with one commentator smelling a "whiff of Weimar" in the AfD's successes. But what did the international press have to say about Sunday's state elections? (14.03.2016)