As the United Kingdom hits a new daily record of coronavirus infections, hospitals are scrambling for space. Infections are being driven by a new highly contagious variant of the virus. All the latest with DW. 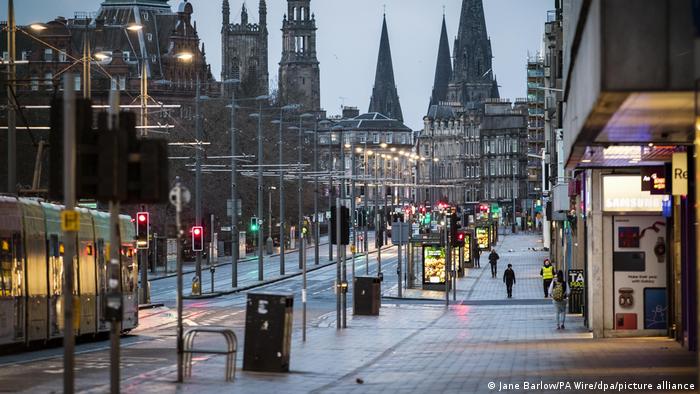 Coronavirus infections have hit a new daily record in the UK

The UK reported its highest day of new coronavirus infections on Monday, with 41,385 new COVID-19 cases. The surge, driven by a new, more contagious variant of the virus, is forcing hospitals to cancel non-urgent procedures and scramble to find space.

There were 357 new deaths reported.

"This very high level of infection is of growing concern at a time when our hospitals are at their most vulnerable," said Yvonne Doyle, Medical Director at Public Health England.

The new variant is believed to be up to 70% more contagious, although it does not appear to make people more sick.

Large swaths of the country have been put under restrictions that have closed nonessential shops, and banned indoor socializing and dining at restaurants. Nonetheless, hospital admissions for COVID-19 in southeast England are approaching or exceeding the levels of the first outbreak peak.

Dr. Nick Scriven, former president of the Society for Acute Medicine, said that the rising number of hospitalizations was "extremely worrying."

"With the numbers approaching the peaks from April, systems will again be stretched to the limit," he said.

South Africa has reimposed a ban on alcohol sales and made mask-wearing mandatory in public. President Cyril Ramaphosa said there had been a "rapid rise" in infections, largely driven by a new variant feared to be more contagious, and that high alcohol consumption was adding to the burden of hospitals.

A curfew will now start at 9 p.m. instead of 11 p.m. and nonessential establishments such as shops, bars and restaurants will close from 8 p.m. There is a two-week ban on all large gatherings — inside or outside —  with an exception of 50 people for funerals. All beaches and public swimming pools in infection hotspots — including Cape Town, Johannesburg and Durban — have been closed.

The country has reported 1 million coronavirus cases since the first case was detected in March this year, according to data from the Health Ministry. This grim milestone prompted Ramaphosa to call an emergency meeting of the National Coronavirus Command Council.

The country is struggling with a new variant of the coronavirus, 501.V2, which is more contagious.

Russia has revealed that its coronavirus death toll is three times higher than it previously reported, making it the country with the third-largest number of COVID fatalities. Russian President Vladimir Putin has long boasted about the low death-rate, despite experts saying the numbers were being downplayed.

The Rosstat statistics agency said total fatalities from all causes between between January and November had risen by 229,700 compared to the previous year.

"More than 81 percent of this increase in mortality over this period is due to COVID," said Deputy Prime Minister Tatiana Golikova, meaning that over 186,000 Russians have died from COVID-19.

Several German cities experienced delays in receiving and administering coronavirus vaccinations after several temperature trackers showed that some BioNTech-Pfizer shots may not have been cold enough due to inconsistencies in the cold chain.

The BioNTech-Pfizer vaccine uses the mRNA technology and needs to be stored at nearly -70 degrees Celsius (-112°F) before being shipped in cool boxes filled with dry ice. Once out from the ultra-low temperatures, the vaccine must be kept at 2°C to 8°C to remain effective for up to five days.

The temperature in one cool box had risen to 15°C during transport, a spokesman for Lichtenfels said. About 1,000 shots were affected. He added that they had not received any communication from BioNtech on how to proceed.

Lichtenfels, as well as Bavaria's districts of Coburg, Kronach, Kulmbach, Hof, Bayreuth and Wunsiedel were waiting to understand if the shots could still be used.

In a statement, BioNTech said the company was responsible for shipping vaccines to the 25 German distribution centers, after which federal states and local authorities would handle the shipment to vaccination centers as well as mobile vaccination teams.

The new, highly infectious variant of the virus discovered in Britain has been present in Germany since November, according to medical specialists at Hannover Medical School (MHH), Die Welt reported. The virus variant B1.1.7 was found in in samples of a patient who died at the time.

Meanwhile, BioNTech and Pfizer postponed the delivery of new batches of their vaccine to eight European nations including Spain.

The hold-up is due to a "problem in the loading and shipment process" at its plant in Belgium, the Spanish Health Ministry said in a statement on Monday, citing the Spanish branch of Pfizer.

Spain on Monday also said it plans to register citizens who refuse to take the coronavirus vaccine.

Health Minister Salvador Illa said the vaccine is voluntary but those who decline to accept will be listed in a register.

Illa added the register will not be public and will be subject to strict data protection rules, but the data will be made available to "European partners".
DW has an overview of which countries have begun vaccination campaigns, and what comes next.

Sweden's government will have wider powers to impose shutdown measures under a new law proposed Monday. Up to now, Sweden has relied primarily on voluntary social distancing measures.

"In very serious situations, the government will be able to decide on more extensive measures to prevent crowding," Health Minister Lena Hallengren told reporters. "That includes the closure of shops, public transport, shopping centers or other kinds of business that fall under the new law."

Sweden has seen more than 8,000 deaths due to COVID-19, a per capita rate far higher than its Nordic neighbors.

Finland has become the latest European country to report a case of the more contagious coronavirus variant first identified in Britain.

Health officials said Monday that a Finnish citizen who had recently arrived from Britain for a Christmas holiday was diagnosed with the new COVID-19 variant in the southeast Kymenlaakso region over the weekend.

The person's recent connections were traced and his family members have been isolated. Finnish health officials said they believed the variant hasn't spread further.

Slovakia's parliament has passed a constitutional amendment, allowing the extension of the state of emergency by 40 days at a time. It was previously capped at 90 days and was due to expire on Tuesday.

Saudi Arabia has announced an extension to its ban on entry to the kingdom by another week amidst fears over the new coronavirus variant. No entry has been allowed by air, land or sea. However, the interior ministry is allowing non-citizens to leave the kingdom as the government evaluates the current level of threat. Entry is only allowed for exceptional cases.

Israel has entered its third coronavirus lockdown, which prevents residents from moving over 1,000 meters away from their homes.

Prime Minister Benjamin Netanhayu expressed hope that the massive vaccination drive already underway in parts of North America and Europe would return the world to a semblance of normalcy in weeks to come.

South Korea has reported its first cases of the more contagious variant of COVID-19, which was first identified in the UK. The new variant has been detected in a family of three people, who arrived in South Korea a day before the country halted air travel from Britain.

All three, who reside in the UK, are in quarantine.

Authorities have banned New Year's Eve congregations at Sydney's harborside over pandemic concerns. Under regular circumstances, nearly 1 million people get together to see fireworks each year.

New South Wales state premier Gladys Berejiklian said those living in the city center of Australia's largest city could invite up to 10 guests to their homes but guests would have to get permits to enter the area.

Thailand announced its first coronavirus death in nearly two months and tightened restrictions on entertainment businesses in its capital on Monday.

It prompted a ban in Bangkok on betting businesses and midnight closures for its bars, nightclubs and music venues until Jan. 4.

Indonesia has barred International visitors from entering the country for a two-week period to try to keep out a new potentially more contagious variant of the coronavirus.

The new regulation, effective Jan. 1, comes days after Indonesia banned travelers from the Britain and tightened rules for those arriving from Europe and Australia to limit the spread of the new variant.

The number of new coronavirus cases in Africa is rising sharply, and experts are talking of a second wave. But unlike in Europe, COVID-19 vaccines are still months away.

US President Donald Trump has signed the pandemic relief and government-funding measure, averting government shutdown. He had earlier called the Congress-approved bill a "disgrace."