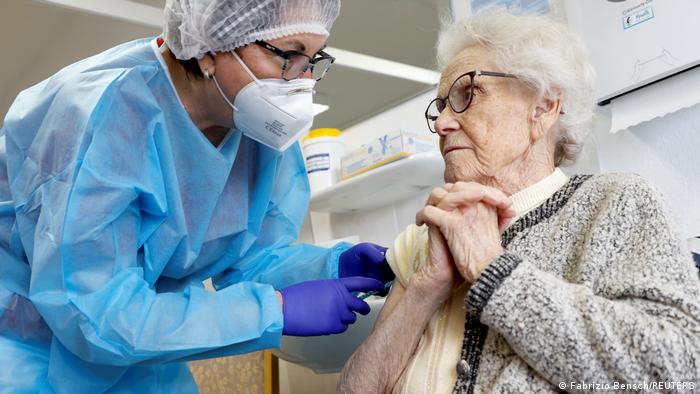 Vaccinations in the bloc began on Sunday following approval of the BioNTech-Pfizer vaccine by the European Medicines Agency shortly before Christmas. The first shipments of the two-dose vaccine arrived across the EU late Friday and early Saturday. Each member nation has been tasked with taking the lead on how to implement the rollout, with three member states — Germany, Hungary and Slovakia — starting vaccinations a day early on Saturday.

Just hours after the vaccines arrived in Slovakia, authorities began administering their first doses on Saturday evening. Front-line medical staff in hospitals treating COVID-19 patients were among the first to get the vaccine. President Zuzana Caputova was scheduled to get vaccinated on Sunday.

Slovakia was the second EU country after Hungary to start the vaccination campaign immediately after the arrival of the first doses, upsetting plans for a coordinated rollout on Sunday of the first COVID shots across the 27-nation European Union.

Projecting a sense of unity

In Germany, mobile teams delivered the vaccine to care homes for the elderly, who were first in line to receive the vaccine on Sunday. Beyond hospitals and care homes, sports halls and convention centers emptied by lockdown measures will become venues for mass inoculations.

Germany, with a population of 83 million, has built up more than 400 vaccination centers to carry out the inoculations, including in venues like Berlin's former Tegel and Tempelhof airports and Hamburg's trade fair hall.

"That is not nearly enough to cover even the elderly. There is a big sense of urgency," she said.

Vaccinations will be free and available to everyone from mid-2021, when the jabs for the priority groups are expected to have finished. There is no obligation to be inoculated.

Andrew Ullmann, a lawmaker with Germany's pro-business Free Democratic Party, said the vaccine rollout is "a major step in humankind."

"I think it's a very touching moment since for the first time in human history, we are combating a pandemic, an acute pandemic, with a newly evaluated and approved vaccine," he told DW.

DW's Kate Martyr visited a care home with some 1,100 elderly residents in the western city of Cologne to see the first patients receive their vaccine.

Vaccines may not have been kept cold enough

Germany's vaccination campaign, however, faced delays in several cities on Sunday after temperature trackers showed that about 1,000 of the BioNTech-Pfizer shots may not have been kept cold enough during transit.

"When reading the temperature loggers that were enclosed in the cool boxes, doubts arose about the compliance with the cold chain requirements," the district of Lichtenfels in Bavaria said in a statement.

Medical workers found that the temperature in one vaccine transport cool box had risen to 15 degrees Celsius (59 degrees Fahrenheit), a spokesman for Lichtenfels said, above the maximum of 8 degrees required by BioNTech-Pfizer.

"It is up to them how to proceed," said a BioNTech spokesperson.

Kickoff in France, Spain and Italy

France, which has been registering around 15,000 new infections per day in its second wave of the pandemic, received its first shipment of the vaccine on Saturday. French authorities said they would first start administering the vaccine in the greater Paris area and in the Burgundy-Franche-Comte region.

In Italy, meanwhile, temporary solar-powered health care pavilions are set to spring up in town squares around the country, designed to look like five-petal primrose flowers, a symbol of spring.

DW Rome correspondent Seema Gupta said the Italian government has ordered 200 million doses that will be administered initially at 21 centers across the country.

"Eventually you are going to see a campaign about why it's important to do this vaccine, which is free and non-mandatory, but very much encouraged," she said.

In Spain, doses are being delivered by air to island territories and the North African enclaves of Ceuta and Melilla. Portugal is establishing separate cold storage units for its Atlantic archipelagos of Azores and Madeira.

The distribution of the BioNTech-Pfizer shot presents a challenge for member states, as the vaccine uses new mRNA technology and must be stored at ultra-low temperatures of around -80 degrees Celsius (-112°F). EU nations have recorded at least 16 million coronavirus infections so far and more than 336,000 deaths — huge numbers that experts agree still understate the true toll of the pandemic due to missed cases and limited testing.

The United Kingdom, the first country worldwide to approve the BioNTech-Pfizer vaccine, is also expected to roll out a vaccine developed by Oxford University and British-Swedish pharmaceutical company AstraZeneca from January 4, according to plans being drawn up by ministers.

The Sunday Telegraph reported that the government hopes to give the first dose of either the Oxford vaccine or the BioNTech-Pfizer vaccine to 2 million people over the next two weeks.

While the Oxford vaccine is expected to be approved by medical regulators within days, Britain's Department of Health said Sunday that the Medicines and Healthcare Products Regulatory Agency (MHRA) must be given time to carry out its review of the data of the Oxford-AstraZeneca COVID-19 vaccine.

"We must now give the MHRA the time to carry out its important work and we must wait for its advice," said a Health Department spokeswoman said, commenting on the Telegraph report.

Outside Europe, Argentina said it will begin vaccinating its citizens against coronavirus on Tuesday using the recently delivered Russian Sputnik V vaccine, following its approval by health authorities for emergency use.

Argentine President Alberto Fernandez and provincial governors said health personnel would receive their vaccines in less than 72 hours. Around 300,000 doses arrived in Argentina on Thursday, and subsequent shipments are expected early in 2021.

Some Western scientists have raised concerns about Russia giving the regulatory go-ahead for its vaccines and launching large-scale vaccinations before completing full trials to test Sputnik V's safety and efficacy. Russian authorities have said the criticism is unfounded.