COVID: North Koreans suffer amid surge in cases, food shortages | Asia | An in-depth look at news from across the continent | DW | 23.05.2022 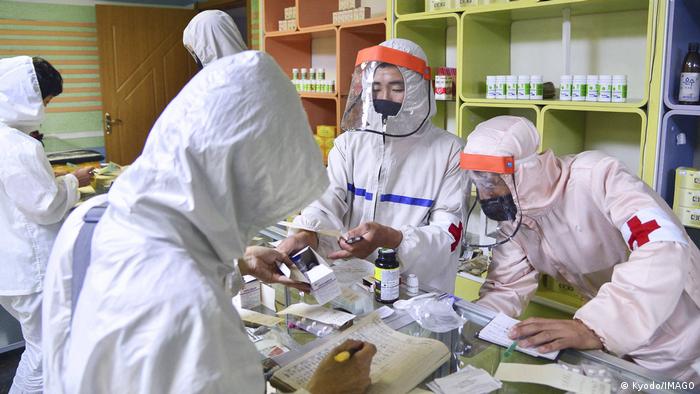 The last time Ken Eom managed to speak with his family in North Korea, they did not seem particularly worried about contracting the coronavirus. A far more immediate concern was obtaining enough food or money to buy food, he said. But he said that may have changed in recent weeks.

Eom, who escaped from the North in 2010 and now lives in South Korea, said he has not been able to speak with his family since Pyongyang finally admitted on May 12 that the virus was running virtually unchecked through its population. He cannot contact them regularly as it is dangerous to try to call anyone in the North, but he fears the virus is likely to be widespread in his hometown.

The illness and the strict lockdown imposed on the 26 million people in the country will add to the hardship felt by most, he said. Combined with the worsening food shortages, the situation has become "a disaster."

"The last time I was able to get through to them, they did not even mention the virus," said Eom, an advocate for defectors and a keynote speaker for the Seoul-based Freedom Speakers International organization.

"The government told them there was no coronavirus in North Korea, so they believed that," he told DW. "They just asked me to send them money so they could get some food. But now I am sure they are afraid about the virus as well," he said.

Eom's family used to make a precarious living acting as brokers for smugglers crossing the border between North Korea and China with cargoes of people, cash or consumer goods that could be sold in the North. The government shut the nation's borders in early 2020 with the aim of keeping the virus at bay — also cutting off many people from any sort of income, however illicit.

With limited access to medicines, few doctors or hospitals, and a largely malnourished and unhealthy population, severing all links with the outside world seemed to North Korean leader Kim Jong Un the best solution.

Until May 12, the government consistently reported that its countermeasures had been a complete success and that no cases of the virus had been reported in the country. Medical experts said that claim was extremely unlikely, but all foreign aid agencies had already been ordered to leave the country. There was no way to verify reports in dissident media that people were being diagnosed with unspecified fevers, and that those who died were being hastily buried.

Analysts have said the situation must be dire if the regime has had to admit that its efforts to seal the nation off from the rest of the world have failed, but the numbers appear to back that up. On Sunday alone, state media reported 186,090 new cases of "fever" across the country, putting the total number of apparent infections at 2.65 million — more than 9% of the entire 25.78 million residents of the North, just eight days after it first admitted it had a problem.

Government statistics claim that 2.01 million people have recovered, although the concern is that they have merely been released from hospitals or clinics ill-equipped to treat them and may spread the virus further afield. The actual number of people infected with the illness is almost certainly far higher than the official figures, as the North has virtually no capacity to test people. The experience of other countries shows that many people may have the virus and spread it, even if they do not display any symptoms.

"Perhaps the people believed the government about the virus before, but they don't anymore," Eom said. "And I am very worried for my family. There is effectively no medical system to care for people who are ill, especially those who have a contagious disease like coronavirus, and nothing to help those who are most vulnerable.

"And this comes on top of the food shortages, with people told to stay in their homes," he added.

Youngchang Song, a member of the Seoul-based Worldwide Coalition to Stop Genocide in North Korea, said he is hearing similar stories from more defectors.

"It is like the 'perfect storm' there at the moment," he said. "People were already suffering from shortages of food because the spring months, before the first crops can be harvested, is well-known to be a time of hunger.

"Now people cannot go out to work in the fields to tend their crops, there is nothing to eat and no medicines in the shops, they cannot go to the underground markets and nothing is being smuggled over the border from China," he said. "There is just nothing for them."

"The defectors that I know who have been able to speak with friends or family there are in despair," he said. "There is nothing they can do to help."

The South Korean government and UN agencies have made it clear that they are ready and willing to help the North, although Pyongyang has ignored those offers and appealed only to China and Russia, its traditional allies, for help. Analysts are not optimistic that Kim will put the needs of his people ahead of the loss of face that would be associated with accepting South Korean or UN aid.

"Considering the terrible human and economic toll COVID can cause in North Korea, one would hope Pyongyang will finally accept international assistance," said Leif-Eric Easley, an associate professor of international studies at Ewha Womans University in Seoul. "But just because North Korea has confirmed infections doesn't mean it will come hat-in-hand to the international community.