COVID in rural India poses parallel health care crisis | Asia | An in-depth look at news from across the continent | DW | 05.05.2021

Millions of people living in underdeveloped areas outside India's cities are contracting COVID-19 without access to treatment. Villagers have been flocking to stuffed city hospitals, raising transmission risks. 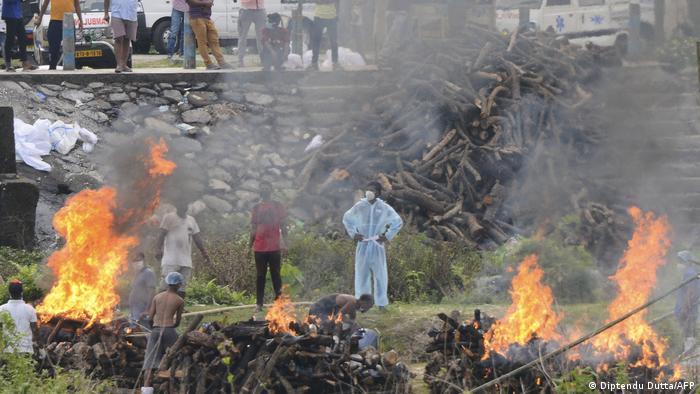 A makeshift crematorium in a rural area in India's West Bengal

India's coronavirus crisis is spreading outside major cities, with rural districts in at least 10 states recording a surge of cases and deaths in April.

Rural districts recorded more COVID-related deaths than urban districts for the first time last month, despite urban areas having higher overall cases, according to the "How India Lives" data repository.

In 2020, the first wave of the pandemic in India was initially limited to densely populated cities. The ongoing second wave in 2021 is ravaging wide swathes of rural India, which are starved of public health resources.

Shortages of available emergency services have also prompted some villagers to travel to cities, sometimes to other states, in a desperate attempt to find care.

Bharti Sharma, a public health consultant, told DW that reports from the ground show rural populations will be at risk if health care deficits are not addressed "immediately."

"Thousands have fled urban areas to the rural villages, and we can again expect a big increase in deaths. But we simply do not know how large this will be yet," Jha added.

Which rural areas are suffering?

Rural areas in Maharashtra state in India's west are perhaps the worst hit, and are contributing more cases to the state's total tally than urban areas. The state is home to business hub Mumbai.

Rajasthan in the northwest and Uttar Pradesh in the north are also reporting a rapid increase in COVID cases in rural areas. West Bengal, after the recently concluded regional state elections, is now reeling under a surge of infections.

Health department officials in the central state of Madhya Pradesh have said that sick villagers are traveling long distances to hospitals in the regional cities of Bhopal and Indore.

The rise in infections in these states can largely be traced back to returnees from the Kumbh Mela festival.

Over 9 million pilgrims visited Haridwar in northern India for the Hindu religious congregation. The mega event was widely criticized for rampant violation of pandemic protocols.

Another challenge health organizations report is the belief among the rural communities that the pandemic is over and that COVID is an urban disease.

Consequently, COVID symptoms have been interpreted as another type of illness. However, there are signs this is changing.

"As infections have climbed during the second wave, villagers have begun to recognize the seriousness of the pandemic and are seeking treatment," Anand Karia of the National Rural Health Mission told DW.

Given the exponential rise in infections in Uttar Pradesh, the government on Wednesday launched a five-day campaign for the early detection of COVID in patients in villages.

Manoj Verma, a doctor in Uttar Pradesh, told DW that many people have been afraid to get tested, due to fears of contracting an infection while at test centers.

The campaign will run in 97,000 villages in the state, during which a team of health workers will go door to door.

But throughout India's rural areas shortages of medical professionals and equipment will remain a challenge in combating the pandemic.

Over 65% of Indians live in rural districts, according to the World Bank.

However, only 37% of beds in government hospitals are in rural India, which would mean 3.2 beds for every 10,000 people in rural areas, according to the National Health Profile 2019.

India is suffering from both a record surge in new infections and a shortage of vaccines. Pfizer has sought to quell safety fears as India continues to insist on local trials prior for foreign shots.

The art of Urdu calligraphy goes back several centuries and is considered one of India's oldest cultural heritages. But it has been in decline since the start of the digital age.