India is suffering from both a record surge in new infections and a shortage of vaccines. Pfizer has sought to quell safety fears as India continues to insist on local trials prior for foreign shots. 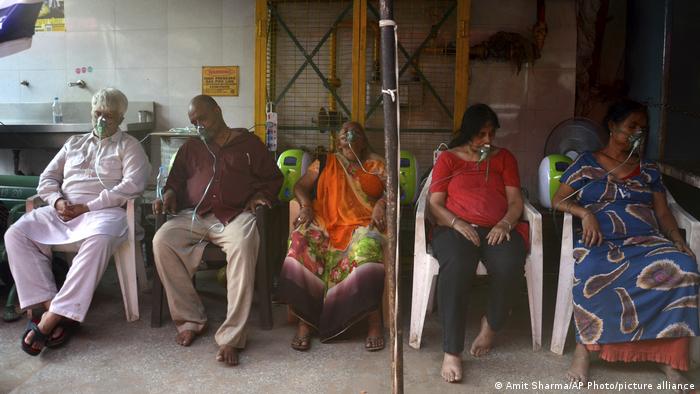 US pharmaceutical company Pfizer said on Monday it is in fresh talks with the Indian government over an "expedited approval pathway" for its COVID-19 vaccine.

The announcement comes as India faces a record surge in COVID-19 infections and shortage of vaccine doses.

"We are currently discussing with the Indian government an expedited approval pathway to make our Pfizer-BioNTech vaccine available for use in the country," Pfizer CEO Albert Bourla said in a post on social networking site Linkedin.

Pfizer said it told the Indian government that there was no concern over the safety of its COVID-19 vaccine.

"Unfortunately, our vaccine is not registered in India although our application was submitted months ago," Bourla said.

Pfizer, which produces the coronavirus vaccine with German partner BioNTech, said it would only supply doses through government contracts.

Pfizer was the first company to apply for emergency use authorization for its vaccine in India late last year.

The company withdrew its request in February after India sought a small, local safety trial for the shot before considering its request.

But as infections skyrocketed, the Indian government said in April it would fast-track approval for some foreign shots, with companies now required to do a domestic trial within 30 days of approval, not before.

"Pfizer’s application for emergency use authorization was supported with data that shows an overall efficacy rate of 95% with no safety concerns," a company spokeswoman told Reuters.

India has also asked Johnson & Johnson and Moderna to sell their vaccines to the country.

On Saturday, India said it received 150,000 doses of Russia's Sputnik V vaccine and that "millions of doses" more would arrive.

Why is India struggling with its vaccine drive?

India has the world's biggest vaccine making capacity. However, daily COVID-19 inoculations have dropped sharply from an all-time high reached early April as local companies struggle to increase supplies and imports are limited.

Daily shots have averaged 2.5 million since hitting a peak of 4.5 million on April 5.

Around 10% of people in India have received at least one dose of a vaccine. Almost 2% are fully vaccinated.

All adults have been allowed to be vaccinated since the weekend.

The BioNTech-Pfizer has to be stored in ultra-low temperatures, which could prove a challenge.

The company said doses could be kept in ultra-low-temperature freezers for up to six months, in the shippers for up to 30 days by refilling them with dry ice every five days, or in common refrigeration for five days.

India, a country with over 1.3 billion inhabitants, has been severely hit by a second COVID-19 wave with  several virus variants since the end of February.

On Saturday, the South Asian country had reported over 400,000 cases for the first time, a global high.

The surge has overburdened India's struggling health system. At least 28 patients died on Monday night in the states of Karnataka and Madhya Pradesh because oxygen supplies had run out, India's NDTV reported.