COVID: Misinformation complicates India′s fight against pandemic | Asia | An in-depth look at news from across the continent | DW | 03.05.2021 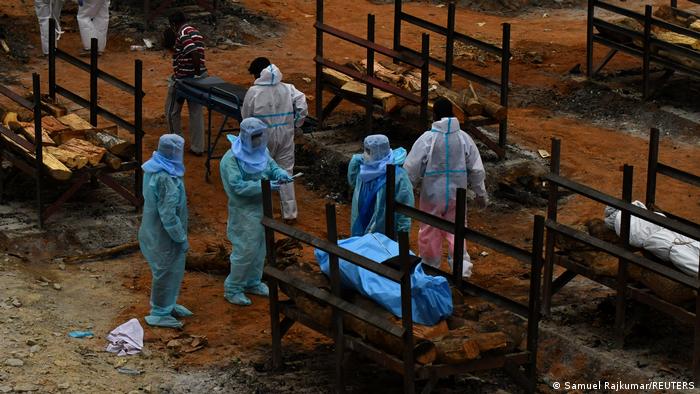 With COVID cases surging nationwide, many gullible people are increasingly falling prey to a rising tide of misleading and false content

India reported more than 300,000 new coronavirus infections for a 12th straight day on Monday, taking its overall number of cases to nearly 20 million.

Experts say actual numbers across the country may be five to 10 times higher than the official tally.

Authorities have been taken by surprise at the ferocity of the latest virus surge in the country and have encountered massive difficulties in ensuring enough stocks of resources like medical oxygen, essential drugs and hospital beds.

They are also struggling to come up with an effective strategy to curb the virus' spread.

Their task, however, is made more challenging by untrue news stories, conspiracy theories and unverified information circulating on social media platforms.

The content in these messages and posts range from the origins of the second wave in India to the efficacy of vaccines and suggestions to boost immunity using home remedies.

"Most of the health misinformation deals with the pandemic and that too, when the country is also in the midst of a massive vaccination drive," he said.

'There is obviously a lack of respect for science'

Observers and activists say authorities haven't taken enough action to stop the misinformation. In fact, some public figures and senior officials are themselves responsible for its spread.

In mid-April, when the number of COVID cases began to skyrocket, V K Paul, a senior government official who is at the forefront of the nation's coronavirus response, recommended that people consult alternative therapy practitioners if they have mild or asymptomatic disease.

He also advised people to consume "chyawanprash" (a dietary supplement) and "kadha" (a brew of herbs and spices) to improve their immunity.

His statement triggered criticism from doctors who said such recommendations could encourage people to try untested therapies and wait too long to seek medical help.

"This is astounding and so misleading. It will encourage people to sit at home, drinking such concoctions and by the time they reach hospital, it will be too late," Rajan Sharma, ex-national president of the Indian Medical Association, told DW.

"When you have public authorities endorsing such appeals, there is obviously a lack of respect for science. What effect do you think it will have on those consuming social media?" Gupta told DW.

Experts believe that people's low trust in news media and a weak public service media, coupled with a fragmented audience and high social media use, have been responsible for the rapid and wide spread of misinformation.

Consumption of social media content has increased enormously since the Indian government imposed a strict nationwide lockdown in March last year to control the spread of the virus.

WhatsApp, which has over 500 million users in the country, is the platform through which most misinformation is being peddled.

With COVID cases surging nationwide, many gullible people are increasingly falling prey to a rising tide of misleading and false content, which is also affecting the nation's mass vaccination drive by spreading rumors about the adverse effects of vaccines.

There has been false information regarding vaccine safety among people with preexisting conditions like diabetes and hypertension and, also, among women.

Additionally, there have been myths about using nebulizers as a replacement for medical oxygen tanks, for which there is currently a severe shortage in the country.

Furthermore, rumors promoting the inhalation of steam as well as the consumption of garlic, cinnamon and liquorice root, as a prevention measure or cure for COVID have been widely circulated.

Another dangerous idea that is being propagated on social media is that Indians have a higher immunity against the coronavirus.

This was based on an erroneous and superficial interpretation of a single gene study conducted among different ethnic groups.

"There is simply no scientific evidence to back this absurd claim. We had to debunk this claim to make people understand that Indians do not have any special genetic protection against the virus," a researcher from Alt News, a non-profit fact-checking website, told DW.

A lot of this content, in the form of text, images and videos, is shared in local languages.

"Many of these videos and memes are recycled as they don't evaporate easily from cyberspace. Even after this avalanche of misinformation is debunked, there are still people who are unsure of what to believe," Prateek Waghre, a research analyst at the Takshashila Institution, told DW.