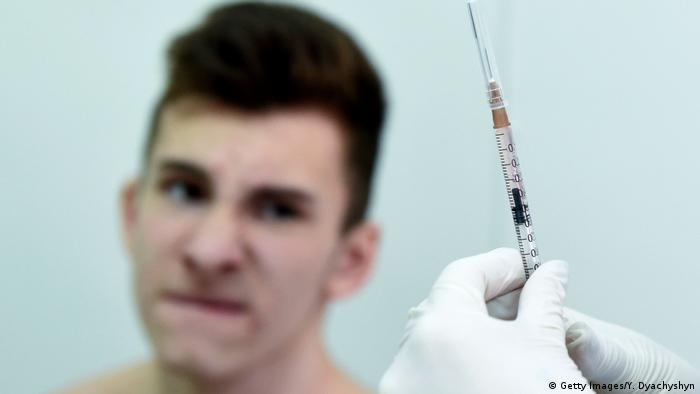 We're constantly being confronted with new findings about the efficacy and side effects of various coronavirus vaccines. But keeping up with and making sense of the latest research is daunting for laymen and laywomen, and has created fertile ground for the spread of falsehoods on the internet. In this DW factcheck, we put a spotlight on the four biggest myths surrounding coronavirus vaccines.

It is easy to get DNA and RNA confused, two similar abbreviations that relate to genetic material. But they're very different.

DNA contains the genetic blueprint that determines our bodies' various traits. Viruses such as SARS-CoV-2 have RNA that stores their genetic material.

But RNA is also found in the human body, and plays a role in protein synthesis.

Viruses tap into this mechanism to reproduce in human cells. The human body, however, recognizes these intruders by their protein spike, producing antibodies and t-cells to fight off the virus.

RNA vaccinations inject only one element of the SARS-CoV-2 virus into the human body, namely mRNA, containing the blueprint to produce its spike protein. The human immune system then kicks into action, forming antibodies against the pathogen.

No human or virus RNA, however, ever enters the cell nucleus. This means it does not get in contact with our genetic material. After serving its purpose, human cells then break down the RNA.

A scientific study published in December 2020 claims the genetic material from the SARS-CoV-2 virus could manipulate human DNA through the reverse transcriptase, an enzyme that transcribes RNA into DNA, which can enter the cell nucleus. The study in question has not yet been peer-reviewed and is hotly debated.

Virologist David Baltimore from the California Institute of Technology won the Nobel Prize for his role in discovering reverse transcriptase.

Science magazine quoted him describing the new work and findings as “impressive” and “unexpected.” However, he noted that the work showed only that fragments of the COVID-19 virus genome integrate that couldn't produce infectious particles and represented a biological "dead end."

"It is also not clear if, in people, the cells that harbor the reverse transcripts stay around for a long time or they die," Baltimore said. The work raises a lot of interesting questions."

Waldemar Kolanus, who headsLife & Medical Sciences Institute (LIMES) at Bonn University, doubts the findings are relevant for the actual vaccine. Speaking to DW, he said the structure of mRNA has been deliberately altered for vaccines so as to prevent cells instantly breaking them down."Most likely, it cannot be reverse transcribed." As such, mRNA vaccines are much safer with regard to such processes than actual virus genomes, he says. 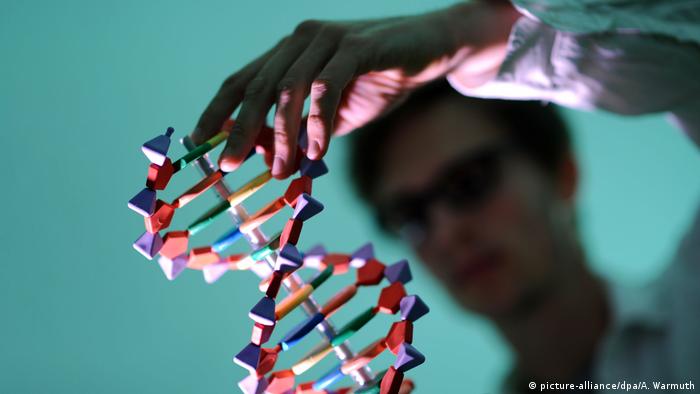 It is claimed that antibodies produced through SARS-CoV-2 vaccinations not only bind to virus spike proteins but also to Syncytin-1, a protein that plays a role in placental development. Some claim vaccines inactivate this protein and thereby cause infertility.

"Generally speaking, there are an abundance of reasons why this theory cannot be true," Udo Markert of Jena University's Placenta Lab tells DW. He says one reason is that both proteins have very little in common. They are only 0,75% identical, according to the researcher. "That's very little."

Researchers have examined this potential danger in the past, for a drug against multiple sclerosis (MS). They found that the targeted protein bore an 81% similarity to Syncytin-1. Yet despite this close resemblance, no noteworthy side effects were recorded.

Udo Markert says the illness brought on by SARS-CoV-2, COVID-19, is another reason why this theory cannot be true. After an infection, he says, "women are exposed to far greater quantities of protein than after a vaccination." If the infertility theory were true, COVID-19 would pose an even great risk for women's fertility than any vaccine.

Markert says women who contracted the SARS virus during the 2003/2004 outbreak showed no signs of infertility either. The SARS virus spike protein, after all, bears great similarity to the one found on SARS-CoV-2.

The British Fertility Society concludes that "there is absolutely no evidence, and no theoretical reason, that any of the vaccines can affect the fertility of women or men." 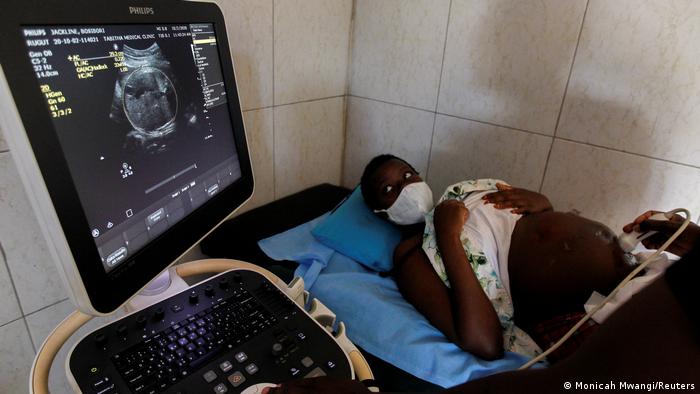 There is no evidence that COVID vaccines affect fertility in women

Developing and getting vaccines approved usually takes ten to 15 years, sometimes even longer. The first SARS-CoV-2 vaccines, meanwhile, took less than a year to be approved. It is therefore understandable that some people feel uneasy about this break-neck development speed. There are several explanations why the vaccines were ready for use after such short time.

One is that developers build on pre-existing know-how. Vaccines use technologies that have already been studied or even tested. Researchers knew a lot about coronaviruses from the study of the SARS and MERS (2012) pathogens. Vaccines were developed in these contexts, too.

Another reason is that across the world vast amounts of money were put into developing SARS-CoV-2 vaccines. This provided researchers with copious resources and personnel to set on this task, and conduct many more tests than usual.

A third reason lies in the fact that many processes were streamlined and accelerated. Mark Toshner, who was involved in testing the AstraZeneca vaccine, told the BBCit is misleading to think vaccine trials take years. He says in reality, much time is spent waiting for research funds, finding test subjects, and receiving permission to conduct trials. Since time was of the essence in the pandemic, some tests that are normally conducted consecutively were carried out simultaneously. Vaccines then underwent so-called rolling review, meaning that authorities assessed test results as they came in. Despite these accelerated steps, all vaccines had to undergo strict vetting by the European Medicines Agency (EMA) for market approval in the EU.

For all those reasons, accelerated development and screening processes do not mean corners were cut. It merely indicates that vaccine development was afforded utmost priority amid the global pandemic. 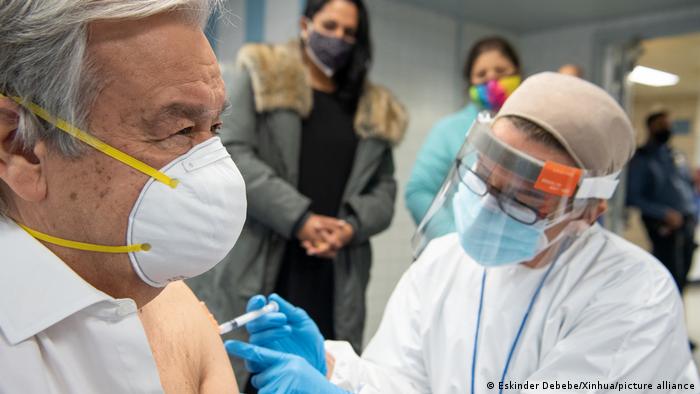 Many top politicians, like UN Secretary General Antonio Guterres, have had themselves vaccinated in front of rolling cameras

Claim: People who have recovered from COVID are better protected against infection than if they were vaccinated

A large majority of individuals who contractSARS-CoV-2 only experience mild symptoms, or none at all. According to Germany's Robert Koch Institute (RKI), 80% of all those who tested positive for the virus during the first infection wave in spring 2020 showed mild symptoms. The remaining 20%, meanwhile, suffered from severe or even critically dangerous COVID-19.

Nevertheless, there is no guarantee that individuals who are unlikely to develop severe symptoms will not suffer from a serious case of COVID-19. Young, healthy people keep developing serious symptoms and dying.

It is currently unknown if and when these long-term symptoms subside, deputy head of the German Association of Immunology, Reinhold Förster, tells DW. Risking an infection, instead of getting immunized, thus poses "a great risk." 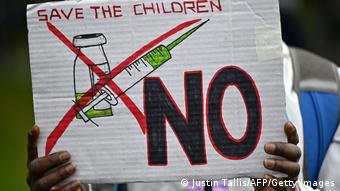 Protesters have taken to the streets to protest against vaccines, slowing down the fight against the pandemic

Another argument in favor of vaccinations is that immune systems respond differently to jabs than actual infections. Speaking to public broadcaster NDR, virologist Christian Drosten said that "vaccines may afford greater long-term protection against infection." He says research shows vaccinations lead to the production of more antibodies for longer periods of time.

Based on his as yet unpublished research findings, Förster concurs. "Essentially, what counts is the quantity and quality of antibodies produced," he said. The quantity aspect concerns the affinity of antibodies to bind with proteins and thereby prevent infections, he says. Förster says that after two BioNTech/Pfizer jabs, antibodies were observed displaying these very traits.

Deciding not to get vaccinated also carries a societal dimension. Getting immunized helps contain the overall spread of the virus, thereby reducing the overall risk of contagion.

Rachel Baig contributed to this article, which was translated from German.

German study on potential effect on fertility through vaccines