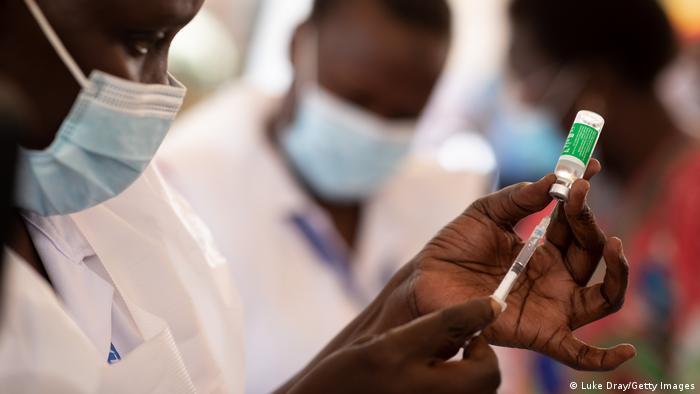 Uganda kicked off its vaccination campaign on March 10

Inoculations delivered to Africa through the World Health Organization-backed COVID-19 Vaccines Global Access (COVAX) scheme will not be enough to contain the pandemic, the Africa CDC, the African Union's public health body, has warned. The World Health Organization (WHO) has reported that so far, fewer than 2% of global vaccinations have been carried out on the continent.

Delivery issues and a sense of vaccine nationalism in richer countries partly explain this gap. Yet logistical problems are to blame, too, and inefficient management and failures to properly prioritize high-risk groups have made matters worse.

"This is exacerbated by reports about possible vaccine side effects and online disinformation campaigns on the internet," said Dr. Catherine Kyobutungi, who heads the Nairobi-based African Population and Health Research Center (APHRC), one of Africa's leading public health institutions.

Which countries are leading the way?

Kyobutungi said African countries are, in general, falling behind. Though disappointing, the epidemiologist said it's not much of a surprise.

"You can put the African countries into three categories," she said. "There are those who have vaccinated about 2% — Senegal, Rwanda, Ghana. And then we have Kenya, which has started slowly, but has gone up. But Kenya has still less than 1%. And then there are countries like Uganda and Nigeria that have less than 0.5%. Every country seems to be struggling with different things."

Each country faces different challenges, she said. One big problem, however, remains in that poorer countries still have less access to vaccine doses in the first place.

"Kenya got a million doses and distributed them across the whole country, but in Nairobi people are getting turned away because they don't have enough," she said, pointing out that the country was originally supposed to have received some 1.5 million doses by now. The country has so far failed to vaccinate high-priority groups, such as health officials and teachers.

Distributing the vaccine is another issue, said Kyobutungi. She said Kenya tried to fairly distribute vaccine doses to all its regions, but failed because urban centers have far better infrastructural and organizational networks than rural regions. This meant that not all doses available in rural areas were used, while demand in the capital, Nairobi, far outweighed supply. 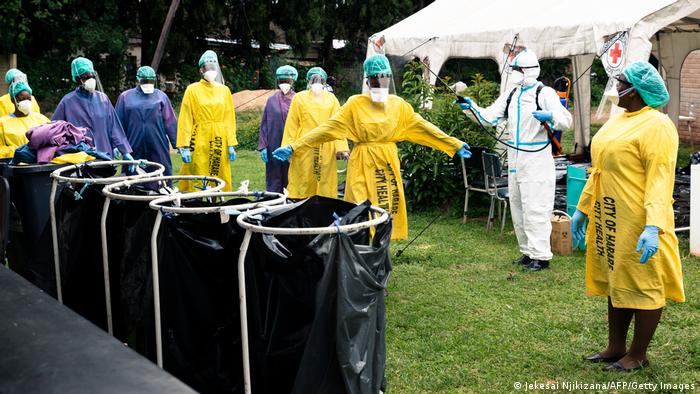 Zimbabwe began vaccinating with the China's Sinopharm vaccine in February

AstraZeneca leads the way in Africa

AstraZeneca's vaccine is the most commonly administered in Africa. The reason is simple: it's relatively inexpensive and — unlike other vaccines — easy to stockpile, as it doesn't need to be refrigerated at ultra-low temperatures.

Reports of potential side effects, including rare cerebral venous sinus thrombosis, or blood clots in veins that drain blood from the brain, have sparked heated debates in Africa. But most countries have decided to follow WHO advice to continue administering the AstraZeneca vaccine. Among them is Nigeria. The country of over 200 million has recorded no vaccinate-related deaths or blood clots, said Faisal Shuaib of Nigeria's National Primary Health Care Development Agency.

South Africa, meanwhile, has stopped administering the AstraZeneca jab because it appears to be ineffective against the South African coronavirus variant. The Johnson & Johnson vaccine was considered a viable alternative, until reports of blood clots emerged in the United States. This means South Africa's vaccination rollout has now been completely suspended.

Vaccines have been transported to African countries via various routes through different initiatives, such as COVAX. The global initiative was created to grant all countries equal and fair access to vaccines. The African Union and individual African governments have, however, also taken steps to acquire doses beyond these initiatives, while a number of European states, China, Russia and India have donated vaccines to certain countries.

Kyobutungi foresees problem with the rich countries rejecting the AstraZeneca and Johnson & Johnson vaccines because they can afford to buy alternatives, leaving the African countries with what's left simply because they have no other choice. This, she said, could increase vaccine skepticism among Africans. 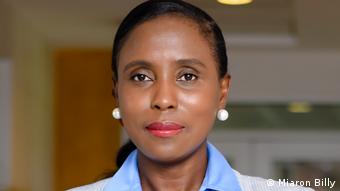 Kyobutungi said African countries are falling behind in their vaccination campaigns

The WHO has therefore urged all countries to invest more into the COVAX scheme, warning against succumbing to "vaccine nationalism" whereby some states buy up newly developed vaccines and solely prioritize their own people.

"This is a big problem Africa is facing," said Kyobutungi. Nationalist tendencies, she said, "are undermining the COVAX initiative," and vaccine dose deliveries to Africa via COVAX are 20% behind schedule. She added that it wasn't in the long-term interest of global health when countries like the United States prioritize vaccinating each and every US citizen before considering sharing doses with other nations.

African countries require vast quantities of doses to immunize their populations. Bizarrely, however, doses are going to waste due to poor infrastructure. Malawi Health Secretary Charles Mwansambo, for instance, announced this week that over 16,400 doses had expired and would now be destroyed. They were part of a consignment of 102,000 doses provided by the African Union.

Kyobutungi said she expects there will be continued problems with logistics and cold chain assurance, adding that it was possible that in two months' time there would be news that 200,000 doses had expired over the difficulties of shipping them to rural regions. And, she said, recalling these already distributed vaccines was very challenging indeed.