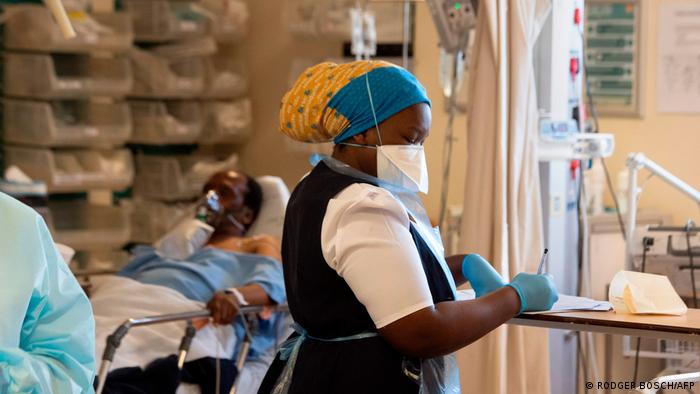 Frontline health workers will be first to be vaccinated

South African President Cyril Ramaphosa said on Monday that his country had secured a total of 12 million doses of coronavirus vaccines through the international COVAX program.

Approximately 2 million of those doses were expected to be released by March, Ramaphosa said in a televised address.

The COVAX program, which is backed by the World Health Organization (WHO) and the Gavi vaccine alliance, seeks to ensure fair access to COVID-19 vaccines for low and middle-income countries.

Ramaphosa also said that his government would ensure that all residents of the country could be vaccinated, regardless of their citizenship. He added that no one would be "forced" to submit for vaccination.

"The arrival of these vaccines contains the promise that we can turn the tide on this disease that has caused so much devastation and hardship in our country and across the world," he said.

On Monday, South Africa received its first batch of vaccines — with 1 million doses of the AstraZeneca vaccine arriving in the city of Johannesburg. People are recommended to receive two jabs each, at intervals.

The first doses will be used to immunize the health workers, with vaccinations set to start in around two weeks.

Medical workers have been battling an increase in COVID-19 infections during a second wave in the country.

South African authorities aim to vaccinate at least 67% of the population — or around 40 million people — by the end of the year.

With a population of over 58 million, South Africa has been the worst country affected on the African continent — with more than 44,000 deaths and almost 1.5 million cases.

The country has also been battling a more contagious virus variant called 501Y.V2. The variant was first identified in South Africa, but has now been detected in countries in Europe, Asia and the Americas.

Nigeria, the African continent's most populated country with over 200 million people, has also seen progress in its efforts to secure vaccine doses.

The country plans to inoculate 40% of the population this year and another 30% in 2022.

Nigeria has recorded a total of 13,242 coronavirus cases and 1,586 deaths, albeit with less well developed medical services than South Africa's.

Poaching figures dropped by a third in 2020, with South Africa's environmental ministry citing the coronavirus lockdown as a significant reason for this. The country is home to 80% of the world's rhinoceroses.

The German chancellor has urged wealthy countries to work together on fighting the COVID-19 pandemic. Nations, particularly in the developing world, have said they are struggling to acquire vaccination doses.