The German chancellor has urged wealthy countries to work together on fighting the COVID-19 pandemic. Nations, particularly in the developing world, have said they are struggling to acquire vaccination doses. 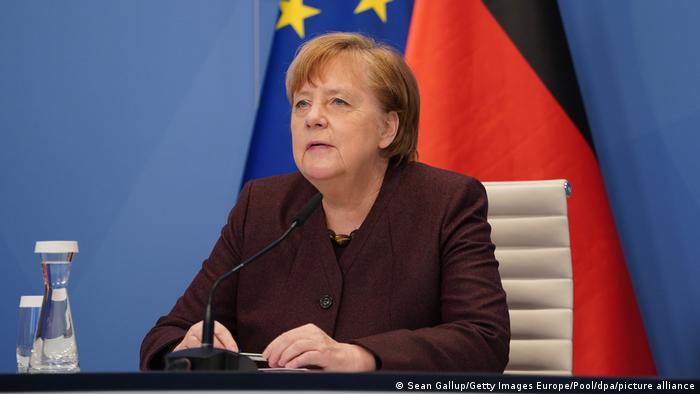 German Chancellor Angela Merkel has urged against a vaccine race between richer countries, saying that a multilateral effort was the best way to exit the coronavirus pandemic.

"It has become even clearer to me than it was before that we need to choose a multilateral approach, that a self-isolating approach won't solve our problems," she said.

"We see that first of all in the question of vaccination since it is the route out of the pandemic. Money is one thing, but the other thing in a time of scarcity is the availability of the vaccine. Here it's about a fair distribution, and not about a question of money.

"Let's not kid ourselves, the question of who gets which vaccine in the world will of course leave new wounds and new memories because those who get such emergency help will remember that," she added.

The address is set to be Merkel's last at the World Economic Forum as chancellor. She plans to step down in September.

Countries particularly in the developing world have said they are struggling to acquire vaccinations, but they are also mulling diplomatic and logistical considerations as they place their vaccine orders.

Western nations have focused on jabs from BioNTech-Pfizer, a joint US and German partnership, the UK's AstraZeneca and Moderna.

But developing countries have started to look at China's Sinopharm or Russia's Sputnik V vaccine.

South African President Cyril Ramaphosa on Tuesday lashed out at "vaccine nationalism," accusing rich countries of bulk-buying coronavirus vaccines and hoarding them to the detriment of others.