Coronavirus in Africa: How deadly could COVID-19 become?

In the face of catastrophic coronavirus death toll predictions, African governments are looking at a number of strategies to mitigate the risk and combat the unique challenges facing the continent. 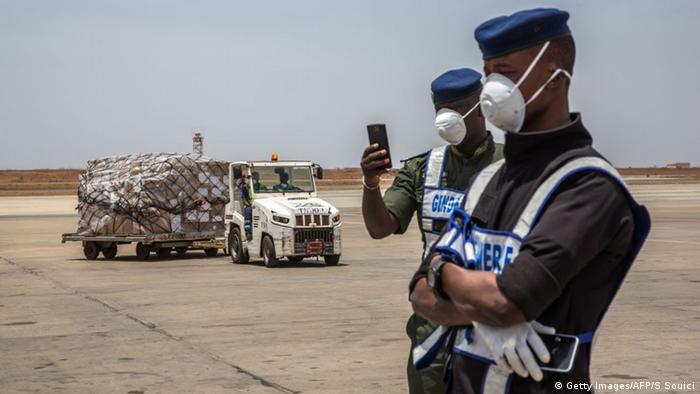 Could the coronavirus claim some 3 million lives across Africa? That was the stark prediction, under a hypothetical scenario without measures to stop SARS-CoV-2 spreading, in a research paper published by scientists at Imperial College London last month.

The researchers had used a computer model to estimate the potential toll of the virus and the resulting respiratory illness COVID-19. The aim of the paper was to predict what might happen if the virus spread unchecked — and how many lives could be saved by measures to rein it in.

At a virtual press conference, DW asked Dr. John Nkengasong, the person in charge of Africa’s response to the coronavirus, what he thought of their prognosis.

"The worst-case scenario is where nothing is done and a continent of 1.3 billion is infected," the director of the Africa Centres for Disease Control said. "But something is being done." The Imperial College researchers took into account Africa’s younger population, estimates for the number of hospital beds available in each country, and differences in social contact patterns.

Indeed, almost all African states have closed their borders and brought in social distancing measures, closing educational institutions and banning mass gatherings to slow the transmission of the coronavirus from person to person. By April 19, the Africa CDC reported that 34 countries had gone further and brought in night-time curfews or partial lockdowns, while 21 had implemented national lockdowns restricting nonessential movement across the whole country. 11 had brought in rules requiring people to wear face masks in public.

Lockdowns have come at a heavy price, with a high proportion of citizens dependent on subsistence income and governments less able to give cash handouts than those in the global North. Cases of brutality as police enforce the measures are on the rise, and aid agencies have warned that the measures are pushing many millions into severe hunger.

The Africa CDC reports that confirmed SARS-CoV-2 coronavirus infections had been detected in 52 African countries by April 21. In most of those, the epidemic was at what the center calls "phase 2," in which the virus is being transmitted from person to person in the country, but those infections can be attributed to contact with a specific person, such as a colleague who caught the virus abroad. Six countries have reached "phase 3," in which the resulting disease starts to surface more widely: Algeria, Ethiopia, Senegal, South Africa, Tunisia and Uganda.

Even in these countries, however, the number of known cases remains small in comparison to outbreaks elsewhere. With the pandemic at an early stage in Africa, much remains uncertain about exactly how grave a threat it will be on the continent compared to Asia and Europe.

In outbreaks of coronavirus such as in China, age has been a major factor determining the chances that people have merely mild symptoms or go on to develop life-threatening respiratory illness. But evidence from outbreaks in Europe and Asia is much more limited when it comes to trying to gauge how underlying conditions and public health issues prevalent in Africa may worsen the prospects of people infected with the coronavirus.

"There are so many parameters on the continent that will play into it," Nkengasong explained. "For example, the youthful population — 70% are less than 30 years old." Comorbidity factors could play a role in determining the fatality rate across the continent, he stressed. "At the same time, we have a high burden of endemic diseases: tuberculosis, malaria, HIV, and other underlying situations like malnutrition," Nkengasong said. "We just don’t know how this will factor into it."

What is certain is that healthcare budgets, numbers of doctors and hospital beds across Africa pale in comparison to those in Europe, including in countries whose systems have been overwhelmed by severely ill COVID-19 patients. 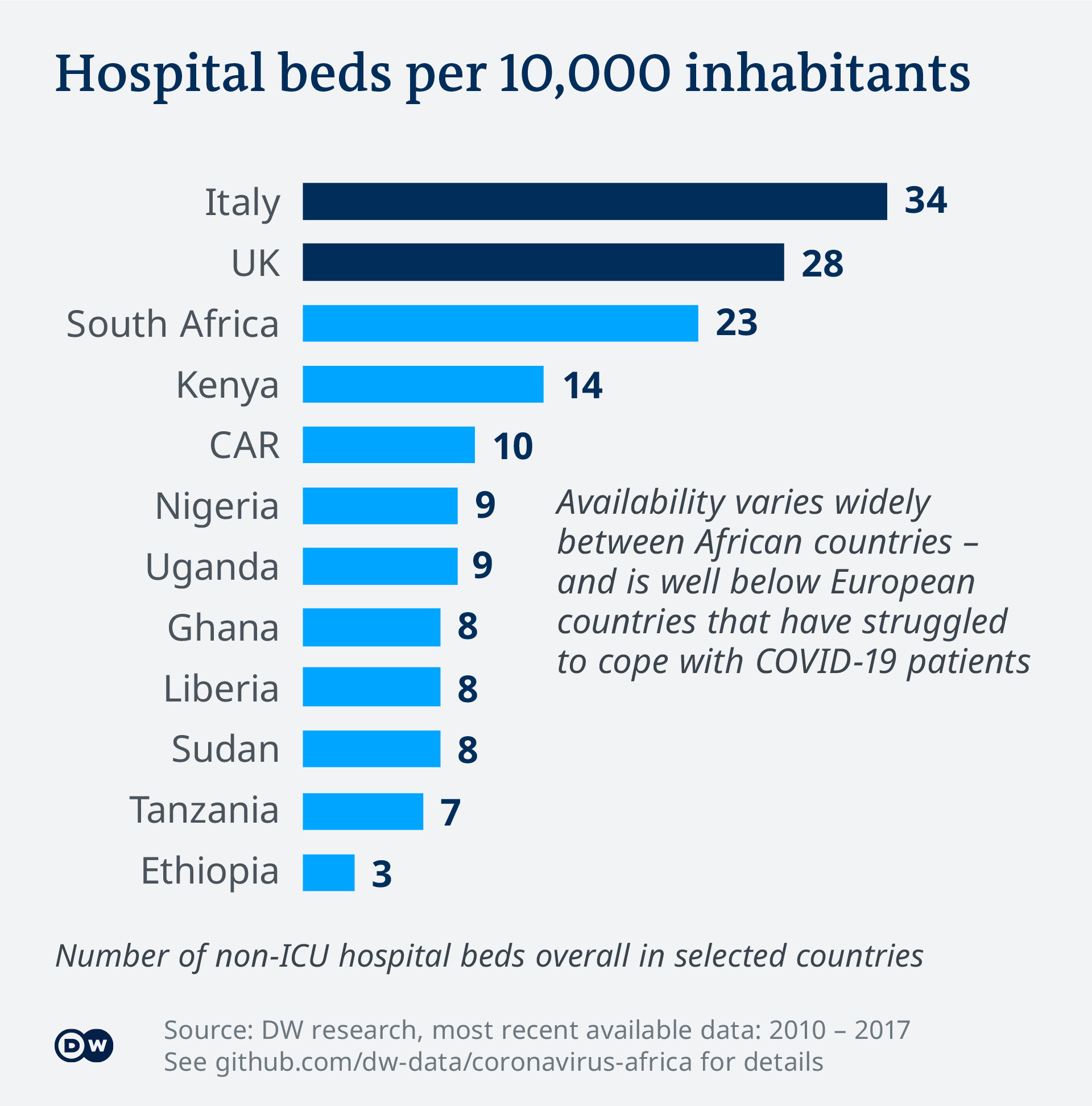 In South Africa, Ghana, and Uganda, academics and industry are working on prototypes for ventilators — the machines needed to provide intensive care to keep the most severely ill patients breathing — that could be manufactured rapidly in order to respond to the pandemic. But they will have to succeed where others have failed: High-profile efforts in Britain, for example, have produced only basic devices that lack the features needed for COVID-19 patients. Moreover, with large rural populations with almost no health system infrastructure at all, reaching patients in high-risk groups in rural areas will be a challenge.

Researchers at the London School of Hygiene and Tropical Medicine have also modeled the possible course of the disease under various scenarios, and found that "shielding" the elderly population could yield some significant results in reducing deaths in African countries. With many households comprising multiple generations, the scientists suggest a strategy of "neighborhood-level house swaps" in which high-risk people would be isolated together in what they called "green zones" for an extended period.

With no vaccine in sight for several months, governments in Europe and Asia have focused on flattening the curve — slowing the spread of the disease in order to avoid filling up hospitals and outstripping care capacity. Given the already low capacity of its healthcare systems, the need to limit the spread of the disease may be even more pressing in Africa. But that, too, requires resources — if not to cover the economic cost of lockdowns then to carry out testing and tracing so that infected people can be isolated.

"I am very worried about the capacity of countries in Africa to deal with this outbreak," said Dr. Al Edwards, a virologist at Reading University, who has worked on vaccines for previous coronaviruses. Despite the continent’s success in containing Ebola, Edwards said a lack of testing capacity would make it difficult to identify and quarantine people carrying the novel coronavirus.

"On the positive side, we know that in the south of Africa in the big Ebola outbreak, testing and contact tracing was done and managed to contain that infection," said Edwards. "So there is precedent in Africa which doesn’t exist anywhere else in the world."

But he warned that, while the symptoms of Ebola were severe and obvious, many people would be carrying this coronavirus in Africa without knowing it. "What seems to be happening with [this] virus is that it is spreading so fast without people seeing it" — opening up the possibility of large-scale asymptomatic transmission.  "If you lose track of who’s infected you are completely stuck, because either you just have to let the infection spread and burn through a population, or you have to restrict everyone." 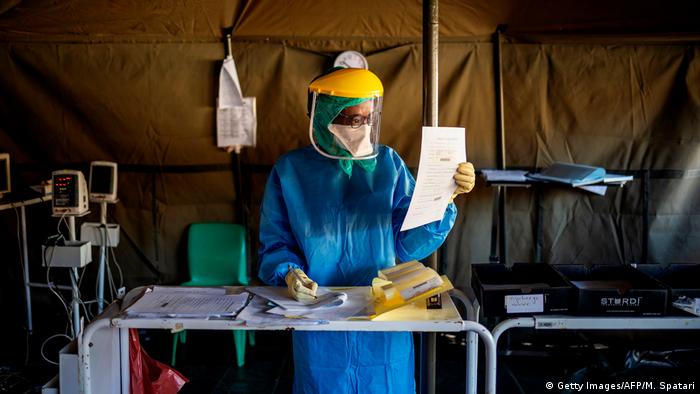 The center aims to distribute materials for 1 million tests throughout the continent in the next 4 weeks. But to reach its goal, 20 million more will be needed in the coming months. Aware that its member states are competing with the world for the same resources, the African Union has set up a joint procurement system to allow member states to increase their buying power.

Recognising the shortage of labor to carry out the time-consuming work of tracking the disease and tracing the contacts of those who test positive, the center is advocating the use of members of the community to help healthcare workers. The approach has already been rolled out in Cameroon and the center says it aims for 1 million "community workers" to eventually be recruited across the continent.

However effective the measures to slow the spread of the coronavirus across Africa, large numbers of people are likely to become infected and be in need of treatment. The Africa CDC is monitoring the results of studies into antiviral medicines, but by any account, current options on the continent are limited.

"We’re playing catch-up and that is a very tough thing to do."

Hunger, violence and despair: lockdowns are meant to keep Africa’s coronavirus cases in check, but many people are suffering as a result — especially the poor. (24.04.2020)

Data and research behind this analysis