Measures put in place to slow the spread of the novel coronavirus are pushing millions of people in Africa into severe hunger, relief agencies warn. The locust plague in eastern Africa could exacerbate shortages. 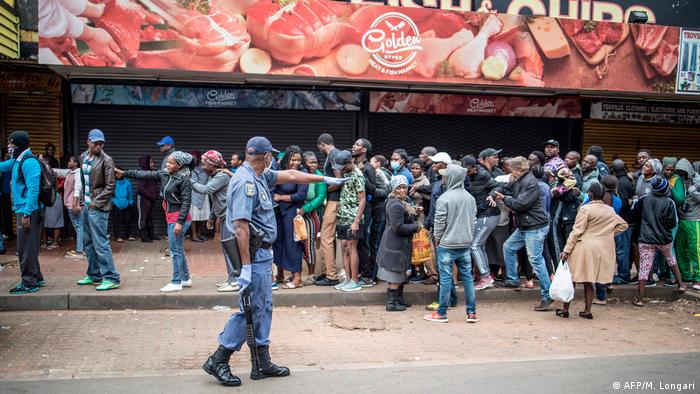 Rowdy scenes of people scrambling for food in Nigeria's commercial capital, Lagos, are the new normal. The federal government and dozens of humanitarian organizations distribute food to ease the pains of the lockdown imposed to stop the spread of the coronavirus pandemic.

"I have to struggle in the crowd because there is no food at home and I need to get food for my daughter, my mum, my sister and her children," said Folashade Samuel, a Lagos slum dweller.

Samuel is among a growing number of desperate Nigerians who risk stampedes to collect free food supplies. The single mother and her sister carry their babies on their backs to get more, but sometimes have to come home empty-handed.

"We were scrambling for food when my sister with a young baby on her back was pushed away, and she had to give up," Samuel said. "The situation is a very, very tough. It is very dangerous to scramble for food because you can fall and get trampled on."

The Nigerian government claims its system is robust and capable of providing support to vulnerable people. But the West African regional body ECOWAS warned on Tuesday that the impact of the coronavirus pandemic could "increase the number of people at risk of food insecurity and malnutrition from 17 million to 50 million people between June and August 2020." 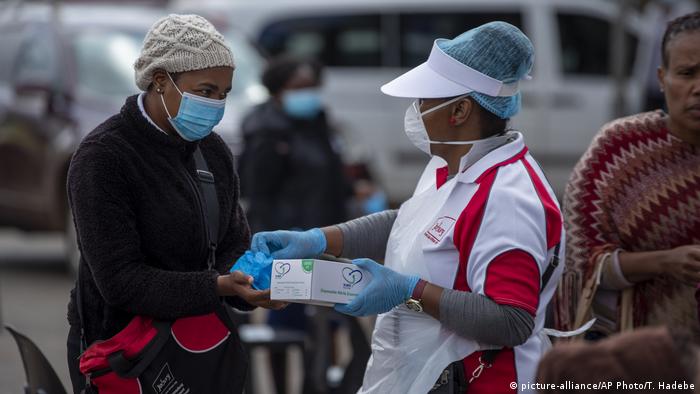 Most African countries in lockdowns

With 24,397 cases of COVID-19 recorded in Africa as of April 21, the outbreak means an additional burden for many people, according to a report by eight nongovernmental organizations, including Oxfam.

"In Burkina Faso, for example, which is facing an unprecedented security crisis, more than 800,000 people are currently internally displaced and suffer from a lack of food supply," Oxfam communications officer Claire Le Prive in Dakar, the capital of Senegal, said in a telephone interview. "The response today is not enough in the face of exploding needs. The coronavirus is worsening an already very difficult situation."

According to Oxfam, food prices have increased dramatically because of movement restrictions and border closures. In some countries, basic foodstuffs are often unavailable. Farmers could also struggle in the new planning season to get quality seeds and fertilizers.

Nomadic herders are also restricted from reaching new grazing lands, according to the humanitarian organization. "Dairy producers claim to have lost 75% of their market due to lockdowns in certain cities," Le Prive said. "They will no longer be able to pay their employees and suppliers. Also, the possibility of taking animals to the drinking wells at night is no longer possible due to curfews. Suddenly, there are too many of them around the wells during the day causing conflict."

A similar situation has been reported in Guinea, where businesses and hotel services have been forced to close and thousands of workers have been laid off.

"I have stopped working," said Ismail Cisse, a father of four, in the capital, Conakry. "My wife is also not working. There is nothing going on now. Even what to eat is not there."

Guinea has recorded 688 COVID-19 cases so far, with six deaths. The government imposed a nighttime curfew and shut businesses down in early March to slow the spread of the virus. To help with food shortages, President Alpha Conde distributed 30 tons of rice, but, according to civil society organizations, that is far from solving the country's food crisis. 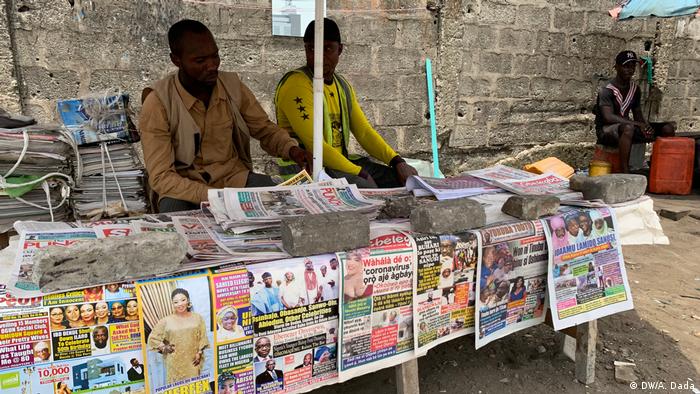 In its annual Global Report on Food Crises, released Tuesday, the UN's World Food Program reports that "the number of people battling acute hunger is on the rise again." Although the research for the publication had been conducted before the outbreak began, the pandemic "may push even more families and communities into deeper distress," according to the WFP

"Three hundred thousand people could die a day over the next three months if we do not get the funding, if we do not get to the people, who need food and other assistance now," WFP spokesperson Bettina Luescher said.

According to the report, at least 20% of the African continent's 1.2 billion people are already undernourished. This is the highest percentage in the world. Widespread poverty, price hikes under the COVID-19 lockdowns and reliance on imported food may push many into severe hunger if African governments do not act quickly.

The report paints a darker picture of a continent already concerned by numerous crises. "Many people in Africa are suffering through wars and conflicts," Luescher said. "There are sufferings in some place from droughts, and in other places from floods and the desert locust plague has been hitting eastern Africa. On top of that, comes the coronavirus."

In addition, millions of people who work as traders in the informal sector, which accounts for 85% of employment across the continent, have been forced to stay home, with no means of making ends meet.

In Kenya, desperate residents in the city's biggest slum, Kibera, rushed to a food distribution event organized on Sunday by opposition leader Raila Odinga. The stampede prompted the government to ban any direct donations.

"Food is more important than corona," Kennedy Odede, whose charity, Shining Hope for Communities, works in Kibera, told the news agency Reuters. "The government must see how people are desperate — they will risk their life for food."

In South Africa, the government is distributing food to 54,000 people deemed vulnerable under the nationwide lockdown.

A severe hunger crisis could be averted if donor countries were to provide $1.9 billion (€1.4 billion), according to the WFP. "It's not new money: That's money they were planning on giving us," Luescher said. "They have to give it now so we can requisition food for three months." 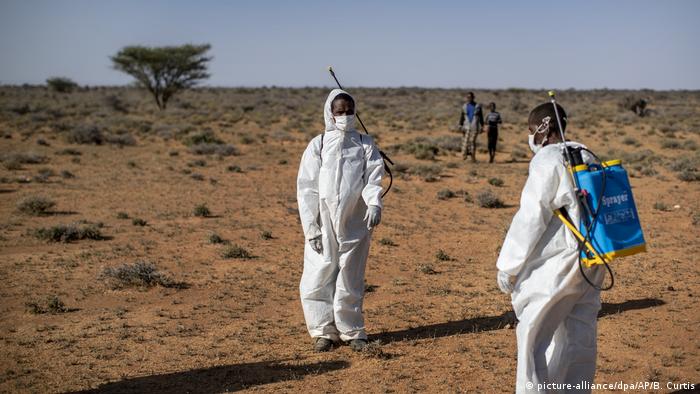 The humanitarian organizations also warn that a second wave of the ongoing desert locust plague in eastern and southern Africacould destroy 20 times as many food crops as the previous one had. Billions of eggs have already hatched, and juvenile locusts could prove more voracious than their parents.

A plague contains several million desert locusts, who, on a single day, could collectively feed on the food of 2,500 people. In the first wave, a few months ago, the locust plague left hundreds of thousands of hectares of arable and pasture land destroyed.

Back in Nigeria, many are flouting government's lockdown order and taking to the streets to sell small items or beg for food. "Since this morning I have not eaten, and, if I cannot find anything to eat in the afternoon, I will have to beg in the evening, because I have to survive," said Lagos resident Benjamin Jeje.

Security personnel enforcing the nationwide lockdown have killed nine people. But this does not prevent Jeje from leaving his home to fend for his family. "I have to survive," he said. "We are running away from the virus, but lack of food must not kill us: We must not go hungry."

Sam Olukoya in Lagos, Nigeria, and Karim Kamara in Conakry, Guinea, contributed to this report.