In the hope of quelling a huge spike in COVID cases, India has widened its vaccination drive to include all adults. Meanwhile, Australians face jail if they try to return home from India. Follow DW for the latest. 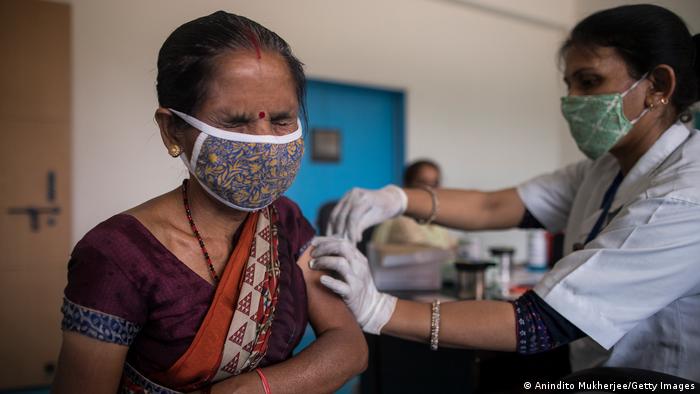 From Saturday, India will begin the mammoth task of vaccinating all adults

India on Saturday widened the country's massive vaccination program to all adults, despite many states not having enough doses to meet demand.

The country is experiencing a horrific spike in cases that has overwhelmed the health system, particularly in the capital, New Delhi, which on Saturday extended a lockdown that was due to expire on Monday for another week because of an increase in coronavirus cases.

India reported more than 400,000 cases in 24 hours on Saturday, a global record. Deaths officially surpassed 200,000 this week, and the true death toll is believed to be far higher.

More than 40 countries have committed to sending medical aid. A US military aircraft carrying more than 400 oxygen cylinders, other hospital equipment and nearly one million rapid coronavirus tests arrived in Delhi on Friday.

Germany's armed forces said on Twitter that a plane carrying 120 ventilators meant for Indian hospitals was taking off on Saturday morning.

Despite being the world's largest maker of vaccines, India remains short of critical supplies of doses, due to a shortage of raw materials.

Meanwhile, a group of scientific advisers set up by the Indian government warned in early March of a new and more contagious variant taking hold.

Critics say officials ignored calls to impose major restrictions to stop the spread. Instead, millions of largely unmasked people attended religious festivals and political rallies over the past two months.

Cities across Germany on Saturday put thousands of police officers on standby ahead of May Day workers' rallies which will coincide with fresh anti-lockdown protests. Police have warned that the demonstrations could turn violent, particularly after nightfall.

In Berlin, up to 10,000 people are expected to show up for a left-wing march starting from 6 p.m. local time (1600 GMT/UTC), hours after a rally by the Querdenker (Lateral Thinker) movement, which opposes the government's COVID strategy.

Police in Turkey detained dozens of people who were trying to hold May Day rallies on Saturday in defiance of a lockdown underway since last week.

At least 100 demonstrators were detained as they attempted to protest in Istanbul's Taksim Square. At least 11 more were held in Ankara for similar reasons.

Public transport will run once again and cafes and restaurants, malls and sports clubs can reopen, although customer numbers will be restricted.  Schools and kindergartens will restart from Wednesday.

Hungary is the only one of the European Union's 27 nations to use vaccines from China and Russia in addition to Western jabs and about 40% of the population has so far received a first-dose.

The Netherlands government on Saturday suspended plans to lift more restrictions as the country struggles with high infection rates.

Ministers began easing some curbs for the first time since a tough lockdown was imposed in December.

A night-time curfew was lifted and shops are allowed to receive customers without an appointment again.

However, with the seven-day incidence rate of infections per 100,000 inhabitants still above 300, a further easing has been delayed until at least May 18.

Italy's former prime minister Silvio Berlusconi has been released from hospital after more than 20 days.

The 84-year-old is still being affected by a coronavirus infection that he contracted in September, his lawyer was quoted as saying by news agency ANSA.

The head of the Forza Italia party is currently facing trial on charges of bribing witnesses during an earlier trial over what were known as his "bunga bunga" parties with young women.

The trial has been postponed several times due to Berlusconi's hospitalization.

COVID-19 and Down syndrome

The plants, which can produce medical oxygen to fill 200 cylinders a day, were donated by a World Bank-backed project.

The country's late President John Magufuli was Africa's most prominent coronavirus skeptic and died in March after weeks of speculation that he was ill with COVID.

While Magufuli had urged Tanzanians to shun mask-wearing and denounced vaccines as a Western conspiracy, his successor Samia Suluhu Hassan has urged the public to follow international guidance to stop transmission of the virus.

Amid the worsening COVID crisis in India, at least 18 people, including two healthcare workers were killed in a fire at a hospital treating coronavirus patients in the western Indian state of Gujarat late on Friday night.

The fire started around midnight in the intensive care ward of the Patel Welfare Hospital, in Bharuch city, north of Ahmedabad

The blaze follows two other deadly fires at hospitals in the state of Maharashtra recently.

The country has seen record deaths in recent days, and stricter restrictions on movement and gathering in public are planned for the upcoming Eid holiday.

Thailand has reported a new daily record of 21 COVID deaths in one day, the health ministry said, amid a fierce third wave of infections.

The new outbreak includes the highly transmissible B.1.1.7 variant and has accounted for about half of its total cases and deaths.

Registration for vaccinations begins on Saturday, with about 16 million people over 60 or those with pre-existing conditions like diabetes getting priority.

In Cambodia, the army has been drafted in to help vaccinate nearly half a million people in the parts of Phnom Penh worst-hit by COVID-19.

Senior military official Eth Sarath said on Facebook that 471,573 people would be inoculated with China's Sinopharm and Sinovac shots during a one-month campaign.

"To date, more than 1.3 million Cambodians, including foreigners, diplomats and civil society workers in Cambodia, have been vaccinated," the defense ministry said.

Communities across Japan that had signed up to act as "host towns" for foreign athletes in the run-up to the Tokyo Olympic Games have expressed disappointment that the pandemic has wrecked this once-in-a-lifetime opportunity.

Hundreds of cities and towns have been making meticulous plans for the arrival of foreign athletes in late July, but now a question mark hangs over the safety of their visits, due to the virus.

Some cities have already scrapped their plans due to the cost of keeping the athletes safe.

In the United States, the iconic Disneyland theme park in Anaheim, California, re-opened on Friday after being closed for 13 months due to the pandemic.

Disneyland tweeted "The Magic is back!" in a short animated clip posted on Twitter.

The theme park will initially operate at 25% of capacity and visitors — currently limited to California residents — will need to pre-book, wear masks and follow social distancing rules.

A vaccination drive in Aleppo and Idlib in northern Syria is due to start on Saturday, as the war-torn country experiences a new surge in infections

The elderly, public sector workers, humanitarian staff and people with chronic illnesses will receive shots as part of plans announced by the Idlib Health Directorate and the Syria Vaccine Team.

Australia is to ban residents and citizens from entering the country if they have been in India within 14 days of landing.

The measure, issued late on Friday, is the first time the country has made it a criminal offense for its citizens to return home. Those who disobey will face fines and up to five years in jail.

The move is part of strict measures to stop travelers from the world's second-most populous nation as it contends with a surge in COVID-19 cases and deaths.

Many countries are reporting more new coronavirus infections. Global data indicate that the COVID-19 pandemic is far from over. DW sums up the current situation in three charts.