Several new measures come into effect in Germany on Wednesday as cases continue to rise. The rate of vaccine uptake remains lower than in other western European countries. 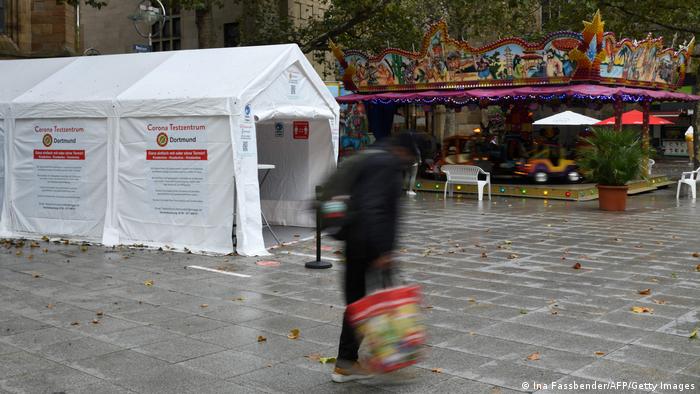 The number of COVID-19 infections broke a new record on Wednesday with the seven-day incidence rate passing 400 for the first time since the pandemic began.

There were 404.5 new infections per 100,000 people in the past week across Germany as a whole, the Robert Koch Institute (RKI) reported.

This was up from a rate of 399.8 recorded on Tuesday. Germany passed its previous milestone record of 300 on November 15, less than ten days ago. The rate of infection broke the 200 milestone just one week prior to that.

The new record incidence rate was recorded as a series of new measures aimed at curbing the infections came into effect.

What are the new coronavirus measures in Germany?

New nationwide rules to curb the spread of COVID come into effect on Wednesday.  Parliament approved the measures last week to replace the "epidemic situation of national concern" which expires a day later.

These include the need to show proof of vaccination, recovery, or a negative COVID-19 test to enter public transport as well as places of work. These rules come in addition to pre-existing ones that require similar proof when entering indoor spaces such as bars, restaurants, and entertainment facilities.

Employers are encouraged to allow staff to work from home wherever possible.

There is also mandatory daily testing for employees and visitors of care homes, regardless of whether they have been vaccinated or not.

In the state of North Rhine-Westphalia, Germany's most populous, entry into crowded venues such as clubs, discos, and Carnival events is now limited to people who can present proof of vaccination or recovery, in addition to a negative test.

Which areas of Germany are worst-affected?

The focus of the fourth wave remains in the east and southeast of the country, although nowhere has been spared the surge in infections entirely.

The incidence rate in the two worst-hit states of Saxony and Thuringia was 935.8 and 721.6 respectively — both are in eastern Germany. On the other end of the scale was the northern state of Schleswig-Holstein with an incidence of just 148.8.

Saxony also has the lowest rate of vaccine uptake in the country with just 57.7% of the local population fully vaccinated. For Germany as a whole, the figure is 68%, lower than other western European nations.

"If we don't get a higher rate of vaccination, we will have it next winter and next fall again," top German virologist Hendrik Streeck told DW.

The total number of infections recorded by the RKI since the pandemic began reached just below 5.5 million.

German Health Minister Spahn: Get vaccinated or get COVID