The number of new coronavirus cases over the past week has reached a new record as infections continue to surge throughout the country. 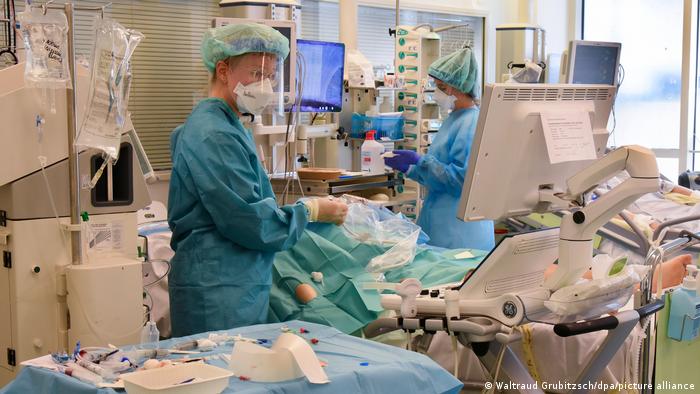 Germany has registered a record rate of new COVID infections over the past week, according to figures released Monday.

The number of new cases per 100,000 people in the last seven days hit 303, the latest data from the Robert Koch Institute of infectious diseases (RKI) showed.

It is the first time the rate has surpassed 300 since the pandemic began and comes just one week since an unprecedented jump to over 200.

Only 67.5% of Germany's population is fully vaccinated. The highly contagious delta variant has run rampant through the unvaccinated population as the temperature drops and people stay indoors.

What are the current COVID figures in Germany?

The RKI recorded 43 new coronavirus deaths in the past 24 hours, up from 33 from last Monday. The overall COVID-19 death toll in Germany now stands at 97,715.

While the number of infections have broken record after record in the ongoing fourth wave, the rate of hospitalization has yet to reach the level seen in the earlier stage of the pandemic.

On Friday, the hospitalization rate was at 4.7 people per 100,000 in the past seven days, up from 4.65 on Thursday. Data is not recorded over the weekend.

This number reached 15.5 during the Christmas period last year.

Which areas of Germany are the worst affected?

The high levels of infection vary greatly across Germany, with several regions in eastern and southeastern Germany reporting more than 1,000 new cases per 100,000 people in the past seven days.

The incidence rate was more than seven times higher in the eastern state of Saxony than in the northern state of Schleswig-Holstein, for example.

Saxony has one of the lowest vaccination rates in the country.

Why are cases surging in Germany?

German doctor and vice president of the World Medical Association, Frank Ulrich Montgomery, laid the blame at the feet of lawmakers, telling the Rheinische Post newspaper that measures against the virus had been "too late, too half-hearted, too varied."

He added that promises that there would be no mandatory vaccinations or any further lockdowns came from a lack of understanding regarding the virus.

Montgomery called for "mandatory vacciantion everywhere where people have a duty towards those they are protecting, such as in nursing homes, hospitals or in schools. Whoever refuses, cannot work there."

The chairwoman of the Margburger Bund doctors' union, Susanne Johna, also criticized political failings, saying that warnings of a surge in infections made in summer had been ignored.

"Warnings were dismissed as scaremongering. Urgent advice was ignored during the election campaign because it was obviously not politically desirable," she told public broadcaster Tagesschau.

The German chancellor warned the country faces several "difficult weeks" as the fourth wave of the pandemic coincides with winter. A record number of daily COVID-19 infections were recorded this week.