COVID: Germany presses ahead with freedoms for vaccinated people

The German government has agreed to allow more freedoms for people vaccinated from COVID-19, or those who show resistance after recovering from the disease. The measures could be passed this week. Germany Health Minister Jens Spahn on Monday said he hoped that a loosening of lockdown restrictions for vaccinated individuals ,or people who have recovered from COVID-19, would be possible within the week.

Approval for the law was given at a meeting of ministers. It must now pass in Germany's lower house, the Bundestag, and the upper Bundesrat.

Spahn said that signs from talks with members of the German lower house of parliament, and with Germany's 16 states, were "very good."

The minister, after a cabinet meeting in Berlin, said the planned regulation should be passed "ideally in the course of this week, next week at the latest."

Under the proposed rules, people who have been fully vaccinated against, or have recovered from, coronavirus would soon be able to meet again without restrictions.

The previous restriction on meetings "does not apply to a private gathering attended exclusively by vaccinated persons or recovered persons," the latest draft said.

Those who had not been vaccinated or recovered "would not be treated as another person," at a private event of those who had been, provided they had the adequate protection.

The proposals also mean people who can show they are vaccinated and recovered would be subject to the same regulation as those who have a negative test result. Such a rule should make it easier for those people to access services such as shopping or visiting a hairdresser.

Spahn also said that people arriving in Germany from other countries would also not need to show a negative coronavirus test if they had proof of double vaccination.

Similarly, quarantine obligations after travel could be dropped in Germany, except for entry from virus-variant areas.

Those vaccinated, however, will still be obliged to wear a mask in certain public spaces as well as to follow social distancing requirements. 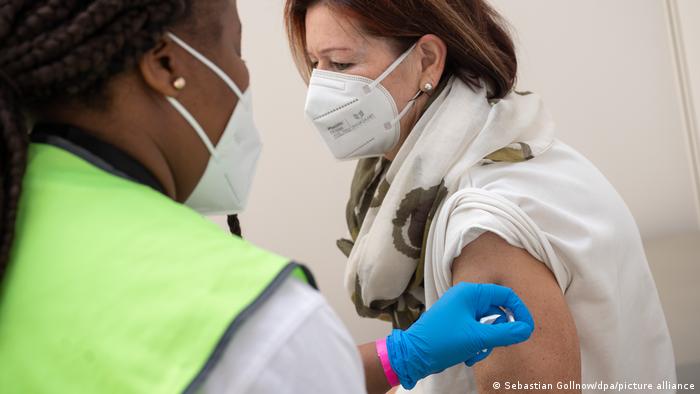 The government has also announced plans for proof of vaccination to be shown digitally, on smartphones. Those without a smartphone would be able to obtain a printout of the digitally readable vaccination certificate as a QR code on paper.

Spahn said that in addition to doctors' clinics and vaccination centers, pharmacies should also be able to issue digital vaccination certificates, which is due to be introduced in the summer.

The health minister also confirmed that the prioritization of vaccination according to age and occupation could
be lifted by June, but warned that this did not mean that everyone can then be vaccinated immediately in June.