People who have been fully vaccinated might soon be able to regain personal freedoms and return to a more ordinary life, Germany's Health Minister Jens Spahn has said. 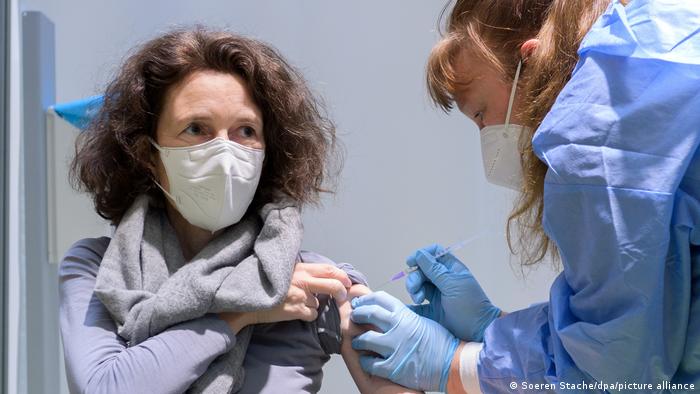 Germans who are vaccinated could effectively see hard lockdown measures lifted for themselves two weeks after receiving their second jab, the German health minister told a Sunday newspaper.

With Germany seeking to ramp up a sluggish vaccination program as it tackles a third wave, state and federal leaders are desperate to achieve some return to normality.

Spahn said that fully vaccinated people could soon be able to travel, visit shops or go to hairdressers without restrictive measures such as as having to present a negative rapid test.

Spahn said any such move would come only when the third wave of coronavirus was at an end, and once further relaxing of lockdown measures — involving the opening of services based on rapid testing — were being examined.

Why consider this now?

The basis for the plans is an evaluation of recent scientific findings by experts in a report to the Federal Ministry of Health.

Germany's Robert Koch Institute (RKI) for disease control says fully vaccinated people could no longer have to go into quarantine.

The institute said there was less transmission risk from vaccinated individuals 15 days after their second dose than with a person without symptoms who had just received a negative rapid antigen test.

According to Spahn, more than 12% of people in Germany had received at least the first dose of a two-dose vaccine against COVID-19 — more than 10 million citizens.

Meanwhile, according to a YouGov survey carried out on behalf of the DPA news agency, 64% of Germans have said they are in favor of a ban on travel abroad for the time being.

Only 26% of people said they would be opposed to such a prohibition, with 10% providing no answer.

The German government has considered temporarily banning travel to popular vacation destinations abroad after a national debate about whether foreign travel should be allowed.

The controversy arose after the Mediterranean island of Mallorca — a favorite destination for many German holidaymakers — was removed from a list of risk zones.