As Italy and France reimpose lockdowns, the US says more than 100 million people have received at least one vaccination dose. Germany, meanwhile, has administered more than 10 million shots. Follow DW for the latest. 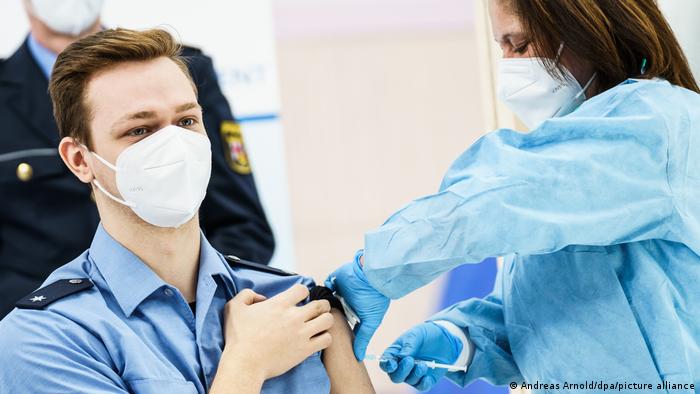 Germany's troubled vaccination drive hit a milestone on Saturday, with authorities reporting that over 10 million people received at least one dose of the coronavirus vaccine. In the country of nearly 84 million, some 4.3 million received both doses necessary to provide full protection, according to German Health Minister Jens Spahn. The EU economic powerhouse has faced serious setbacks and delays since starting the vaccinations in late December, sparking frustration and accusations of incompetence against the government.

Spahn's announcement comes hours after the United States became the first nation in the world to administer at least one dose to more than 100 million people.

The Centers for Disease Control and Prevention said on Friday that the number of people who have received at least one dose of a COVID-19 vaccine stood at 101.8 million, which is about a third of the US population.

Nearly 58 million of those people are fully vaccinated, according to CDC data.

The CDC also updated its guidelines to say that vaccinated people can travel without observing quarantine but should continue to wear masks.

Johnson & Johnson announced Friday that it has started testing its vaccine on adolescents.

The single-shot vaccine will first be tested on a small number of 16 and 17-year-olds as part of an ongoing study of the vaccine that began last September, the company said.

After initial data from the older teens is available, the trial will be gradually expanded to a larger group of younger adolescents between ages 12 and 15.

The vaccine, developed by Johnson & Johnson's subsidiary Janssen in the Netherlands, is already being administered in the US and was given EU approval on March 11.

The Twitter handle of Russian vaccine Sputnik V said that Russia is working on a program to offer the jab to people living abroad starting in July.

"Sputnik V vaccination in Russia! Who's onboard?" the vaccine's official English-language account wrote on Twitter on Thursday, posting a photograph of people next to a plane with Sputnik written on it.

Russian authorities have been skeptical of launching such a program saying that it needed to focus on its own population first.

President Joe Biden urged Americans to keep wearing masks and taking other precautions to stop the pandemic after the country hit the 100 million vaccinations mark.

"I plead with you. Don't give back the progress we've all fought so hard to achieve," Biden said in a brief speech.

"We need to finish this job," he said. "We need every American to buckle down and keep their guard up in this home stretch.

The governor of the US state of Florida, Ron DeSantis, signed an executive order Friday banning the use of "vaccine passports" in the state.

The order bars any government agency in Florida from issuing documentation certifying that an individual has received a coronavirus vaccine.

It also prohibits businesses from requiring customers to show proof they have been vaccinated against COVID-19 in order to enter its premises or get service.

The order does not preclude businesses such as restaurants and retail stores from screening protocols and other measures recommended by state and federal health officials.

California said that it would allow sport and music fans, as well as theater-goers, to attend indoor events in most counties starting April 15 as infections drop.

How Uruguay got Covid-19 under control

Argentina's president, Alberto Fernandez, says he has tested positive for coronavirus despite having been vaccinated with the Russian Sputnik V vaccine on January 21.

Fernandez, who turned 62 on Friday, was in isolation as a precaution but said he was "physically well," despite a slight fever and headache.

Argentina is grappling with a second wave of the coronavirus with a sustained rise in cases. The country of 44 million inhabitants has recorded more than 2.3 million infections and over 55,000 COVID-19 deaths.

The government in Bangladesh has decided to impose a seven-day nationwide lockdown as of Monday, after a surge in infections, Transport Minister Obaidul Qader told a news conference in Dhaka.

Vietnam is seeking help from the United States, the European Union, and Japan in securing supplies of COVID-19 vaccines.

The country's Health Minister Nguyen Thanh Long met diplomats of several countries on Friday as it seeks to secure the 150 million doses of vaccines needed to cover its population.

Long also asked the Japanese embassy for help with technology transfer for vaccine production and testing in Vietnam.

A retired judge in Iraq who presided over the trial of the country's late dictator Saddam Hussein has died after battling COVID-19, Iraq's top judicial body said Friday.

Judge Mohammed Oreibi al-Khalifa, 52, passed away in a hospital in Baghdad where he was being treated for complications from the coronavirus, the Supreme Judicial Council said.

Australia is to continue its inoculation program with the Oxford-AstraZeneca vaccine, health officials have said.

The announcement came after a 44-year-old man was admitted to a Melbourne hospital with a case of blood clotting, days after receiving the AstraZeneca vaccine.

German President Frank-Walter Steinmeier asked Germans to remain united and overcome a "crisis of trust" in the government as the country battles a coronavirus third wave.

The Easter plea on German television on Saturday evening is a rare occurrence. Steinmeier usually only makes such televised appearances at Christmas.

Police in Hamburg and Berlin say they did not record any significant violations of a ban on nighttime gatherings that went into force on Friday night.

Residents of Hamburg can only leave their homes from 9 p.m. until 5 a.m. for certain reasons. In Berlin, people are only allowed outside with one other person during the same hours, although the rules don't apply to children under 14.

The number of confirmed coronavirus cases in Germany has risen by 18,129 to 2,873,190, data from the Robert Koch Institute for infectious diseases showed on Saturday. Fatalities rose by 120 to 76,895, the figures showed.

Italy imposed a strict three-day lockdown over Easter, restricting travel and public gatherings. Non-essential shops are closed and restaurants and bars only providing take-out. The authorities said the measures have been imposed as a precaution as infection rates go down.

Italy also plans to ramp up its vaccination rollout so that it administers half a million shots per day by the end of April, pandemic commissioner Francesco Figliuolo told Saturday's edition of Corriere della Sera.

France also imposed a "light" lockdown on Saturday. The measures include a ban on traveling over 10 kilometers (6 miles), a ban on outdoor gatherings of over five people, and a continued curfew. At the same time, the authorities said they would show "tolerance" over the Easter weekend in some cases, such as city residents traveling to the countryside or parents arranging childcare.

In Switzerland, President Guy Parmelin took part in a virtual vigil for some 9.700 people who have passed away from COVID-19. On the day before, in the north-eastern city of St Gallen, police deployed tear gas and rubber bullets against hundreds of people protesting coronavirus restrictions. 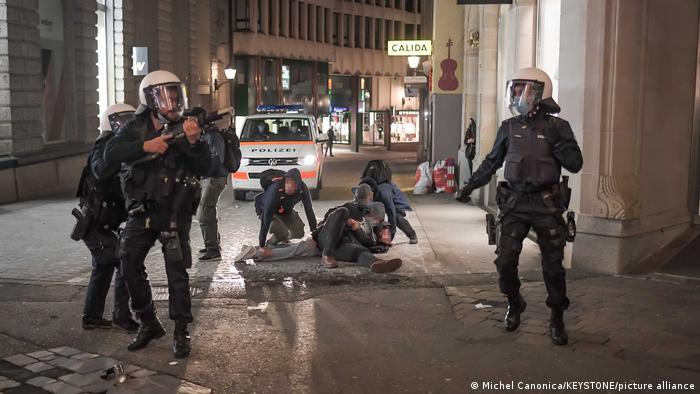 On Friday night, officers were "pelted with objects and had to use rubber bullets in self-defense," Swiss police said.

They added that Molotov cocktails and objects set on fire were thrown at officers later in the evening, resulting in police using tear gas.

Some 1,000 people took to the streets of St Gallen according to local newspaper Tagblatt.

Britain will allow care home residents in England to receive two visitors starting April 12, the government said on Saturday. This will allow some grandparents the chance to meet their grandchildren for the first time in months.

"I’m particularly pleased to allow residents to have more visitors, including grandchildren, given the isolation and concern felt by so many this past year," Prime Minister Boris Johnson said in a statement.

The Netherlands has halted the use of AstraZeneca coronavirus shots for people under the age of 60 after fresh reports of rare blood clots.

The move comes after five new cases of blood clots emerged affecting women between 25 and 65 years of age.

"We must err on the side of caution, which is why it is wise to press the pause button now as a precaution," Health Minister Hugo de Jonge said in a statement.

The suspension will last until April 7 when the European Medicines Agency (EMA) is expected to come out with fresh advice on the issue, he said.

Kenya has ordered an immediate ban on imports of COVID-19 vaccines by private companies, the country's health minister said on Friday.

He said that such shipments were unlicensed and potentially dangerous since the shots could be counterfeit.

"There will be no licensing of private players in the importation of vaccines and any such license given will be and is hereby canceled," Health Minister Mutahi Kagwe said.

The International Monetary Fund has approved a $2.3 billion (€1.96 billion) aid package to Kenya to "address the urgent need to reduce debt vulnerabilities," the Washington-based institution said in a statement.

"The three-year financing package will support the next phase of the authorities' COVID-19 response and their plan to reduce debt vulnerabilities while safeguarding resources to protect vulnerable groups," the IMF said.

Coronavirus: What are the lockdown rules in different EU countries?

Cases of COVID-19 are rising in many parts of the European Union. Consequently, some governments have decided to shut down many areas of public life. Here is an overview of the current rules.

Johnson & Johnson's one-shot COVID-19 vaccine received approval by US regulators, making it the third jab available in the country.

EMA issues warning over Johnson & Johnson vaccine, stops short of ruling against use 20.04.2021

The EU's medicines regulator said that the benefits of the Johnson & Johnson coronavirus vaccine outweighed the risks, despite finding possible links to "very rare" cases of blood clots.