Coronavirus: What are the lockdown rules in different EU countries? | Europe| News and current affairs from around the continent | DW | 02.04.2021

Coronavirus: What are the lockdown rules in different EU countries?

Cases of COVID-19 are rising in many parts of the European Union. Consequently, some governments have decided to shut down many areas of public life. Here is an overview of the current rules. 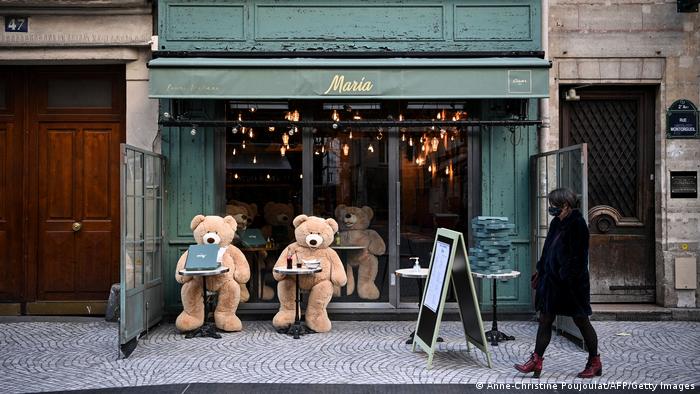 Stuffed toys instead of stuffed bellies: France has gone into lockdown again

Germany: U-turn on a 'quiet Easter'

Chancellor Angela Merkel is keen to impose stricter measures to combat COVID-19, but so far the premiers of Germany's 16 stateshave not given their approval to another hard national lockdown.

At their last meeting, they only extended the measures that are currently in place until April 18. A proposed Easter lockdown was cancelled, for organizational and political reasons.

A total of no more than five people from two separate households are allowed to meet. An "emergency brake" aims to ensure that rules are tightened when the weekly incidence of infections in a particular region rises above 100 for every 100,000 inhabitants.

The wearing of medical face masks is mandatory across German in shops and on public transport. 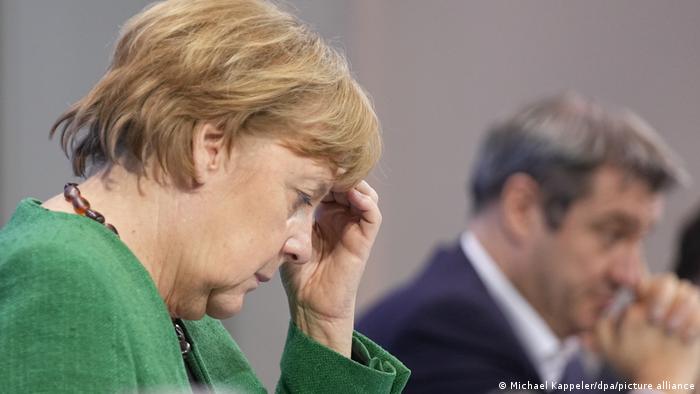 Looking for a way out of the pandemic: Germany's Angela Merkel is still searching...

France: Heading into a third lockdown

The French president, Emmanuel Macron, announced the country's third nationwide lockdown at the end of March. Rules that have already applied to certain regions for a while are now being extended for four weeks to cover the whole of France.

Specifically, this means that most shops will be closed, and a nightly curfew will be in place from 7 p.m. The Easter holidays are also being extended by a week for children in schools and pre-schools.

A relatively new rule in Belgium is that anyone who wants to go shopping now has to make an appointment, unless they are shopping for essentials. Schools and universities will remain shut for three weeks over Easter. Hairdressers, tattoo studios and beauticians must close completely for now.

The current plan is for the rules to be eased on April 19. Until then at the earliest, the evening curfew that has already been in place for several months will continue to apply, as will comprehensive bans on travel and on entering Belgium, which have been in force since the end of January.

Spain: Masks mandatory on the beach

In Spain, locals and tourists everywhere in the country must now wear a mask – including outdoors. Rules on travel are different in this southern European country. Whereas many states are limiting their citizens' movements over Easter, European holidaymakers are still allowed to go sunbathing in places like Majorca.

Portugal: Starting to open up

The Portuguese mainland remains under a state of emergency until April 15. The country imposed a lockdown after the infection rate shot up in winter. The numbers went down as a result, and the Portuguese government has been easing its tight restrictions since the middle of March, step by step.

April should see the reopening of places like museums. The next step will be to extend this to cinemas, theaters, and all shops – as long as the infection rate allows.

Greece: A good reason is needed to go out

Strict rules in Greece will continue to apply nationwide until at least April 5. People there are allowed to leave their homes between 5 a.m. and 9 p.m., but only if they have a good reason for doing so, such as a doctor's appointment, to exercise, go to work, or to take their dog for a walk. Test and quarantine rules apply to anyone entering the country.

Although the number of COVID-19 infections remains high in Bulgaria, the government there eased national restrictions on April 1. Bulgarians are now allowed to go to restaurants again and sit outside. Theaters have also been allowed to reopen, but with smaller audiences.

Schools, including pre-schools, should reopen there later in April.

A few weeks ago, the Czech Republic was the country with the highest weekly incidence of COVID-19 infection in the world. Consequently, all its regions are still on the highest alert level. Throughout the country, a maximum of just two people are allowed to meet at the same time, unless they are members of the same family. As elsewhere in Europe, restaurants, movie theaters, museums, and non-essential shops remain closed. In addition to a night-time curfew, people are also prohibited from leaving their local area.

People are allowed to attend their respective places of worship, but only a maximum of 15 are allowed at a funeral or wedding.

Hungary has also been badly affected by the current crisis. For some time now, Hungarian citizens are almost the only ones allowed into the country. It is effectively impossible for a German, for example, to enter Hungary. As well as being under curfew after 8 p.m., more or less everything is shut, unless it is considered to be providing an essential service. Only close family are allowed to attend weddings, and funerals can take place with a maximum of 50 attendees.

Since the start of the pandemic, the Scandinavian country has pursued a more liberal course. It issued a lot of instructions telling people what they should do, but kept bans and prohibitions to a minimum.

However, since the start of January this year the government has been clamping down a little more. It passed a new set of measures to tackle the pandemic, but in comparison with other EU countries, these are very mild. A maximum of four are allowed to sit at a single table in a restaurant. Up to eight people are allowed to meet. Shops and tourist accommodation remain open.

Who is immune and for how long?

COVID-19 Special: Who is immune and for how long?