Coronavirus leaves Portugal's hospitals in a state of emergency

Overcrowded intensive care units, triage tents outside clinics, skyrocketing death rates — Portugal is getting crushed by the third wave of the coronavirus. Now, even the German army has been called upon to help. 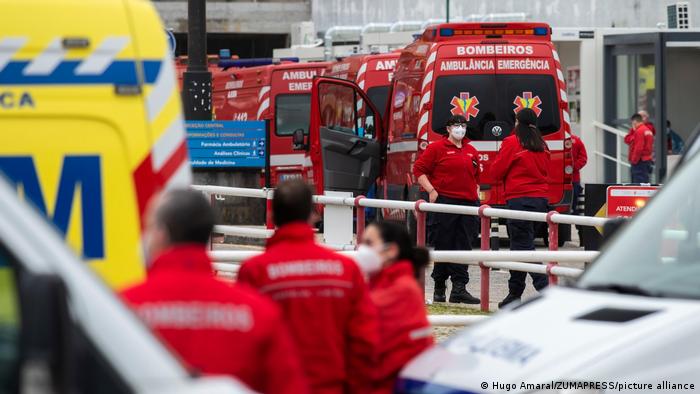 You could say that Portugal had a relatively mild bout of COVID-19 in 2020. That all changed at the start of the new year, however, when the seven-day incidence rate exploded. And over the past seven days, almost 850 new coronavirus cases have been recorded for every 100,000 inhabitants. Portuguese health authorities say that some 43% of the country's overall COVID-19 infections and 44% of all related deaths were recorded in the first month of 2021.

The situation is "very tense," according to Reinhard Naumann. "The entire population is very nervous in light of the dramatic developments of the past two or three weeks," says Naumann, who heads the Lisbon office of Germany's Friedrich Ebert Foundation.

Portugal's government blames the combination of virus mutations, such as the B.1.1.7 variant first reported in the UK, and the relaxation of coronavirus restrictions over the holidays for the spiraling escalation in cases. The country has been under a strict lockdown since January 15, with schools, stores and restaurants all closed and considerable limits put upon freedom of movement. The government also hopes to stop the spread of the new variant by closing its borders until the situation has eased. 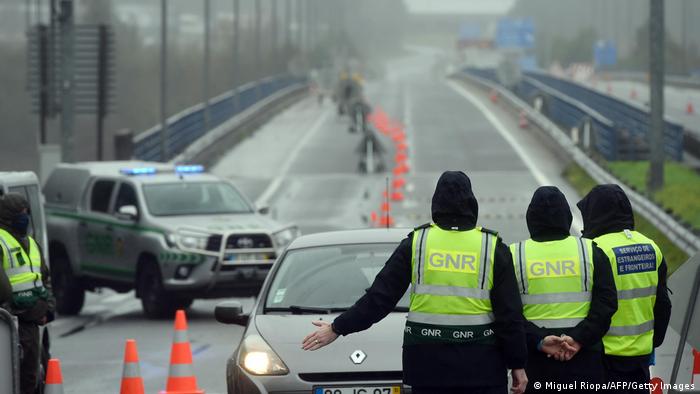 At the moment, ambulances are sometimes forced to wait for hours before struggling hospitals can accept their patients, reports DW correspondent Jan-Philipp Scholz from Portugal. With the country's intensive care units (ICUs) already treating around 850 patients there are almost no vacant beds for the treatment of severe new coronavirus cases.

Approximately 6,700 other patients are being looked after in normal hospital wards and triage tents have even been erected outside some hospitals. Here doctors decide which patients to treat first on the basis of oxygen levels and body temperature. Field hospitals, too, are being speedily set up to take in more sick people.

Joao Roquette, from the University of Lisbon, explains that the indoor basketball court at his school is also being converted and will soon accommodate 150 coronavirus patients: "Sports facilities are very flexible and it's easy to transform a gym into a field hospital. Though it is much more difficult to put in the human resources needed to run them," he says.

While COVID-19 patients are being looked after in public hospitals, private clinics are concentrating on other tasks, explains Friedrich Ebert Foundation bureau chief Naumann: "The private sector is playing an important role in providing care for non-COVID patients who cannot be treated by the public health care system at present," he says in an interview with DW. A lack of medical personnel is probably the greatest problem facing Portugal's hospitals as they battle the steep rise in cases. Almost 10% of the staff is currently suffering from acute COVID-19 infections according to internal health care system statistics. The German armed forces, the Bundeswehr, have sent a 26-person team to Portugal to provide assistance for the next three weeks. That team includes eight doctors. Fifty ventilators, 150 infusion pumps and 150 hospital beds were also sent to Lisbon on board an A400M military cargo plane after Portuguese Health Minister Marta Temido asked Germany for help last week.

The structure of Portugal's Servico Nacional de Saude (SNS) is partially modeled on the UK's National Health Service (NHS). Like its counterpart, it, too, "suffered considerably from many cutbacks over the last few years — in particular during the time of the troika bailout — but it fought its way back," says Naumann. During the eurozone crisis, Portugal was forced to conform to a strict austerity program as part of the bailout conditions set by what became known as the troika of the European Central Bank (ECB), the International Monetary Fund (IMF) and the European Commission. "I get the impression that the ministry has managed things quite well even in this difficult situation," he says.

Naumann is very positive about the efforts undertaken by the SNS during the crisis and paraphrases a popular Portuguese saying by noting that the health system is making "a lot of omelets with very few eggs." Naumann also notes that the health minister and her team have systematically expanded their resources. "It's my impression that they have been working to free up and create extra capacity since the beginning of the pandemic."

A week ago, Portugal began vaccinating seniors over the age of 80 in what the Portuguese press described as a "symbolic start." The vaccination program here is also hampered by the global shortage of vaccines. The government is currently planning to fully vaccinate over 800,000 of the country's population of 10 million by the end of March. An additional half a million people are also scheduled to have received their first dose of the vaccine by then. Till then, those in charge expect the virus to continue its rapid spread, straining the system and those in it.

Portugal stands as one

For doctors and health care workers, the battle against COVID-19 is exhausting work. Many members of the public recognize that and are doing what they can to lend support. Ricardo Paiagua's Caravan Project, for instance, provides quiet spaces right outside hospitals where staff can recover at the end of long, draining shifts. The initiative has fifty motorhomes and 200 volunteers to help exhausted health care workers. "The work here is very emotional," Paiagua tells DW. "Last week a doctor knocked on my door and wanted to thank me. She said she was plagued by feelings of despair. As well as needing a place to sleep, I think health care workers really need moral support."

Reinhard Naumann of the Friedrich Ebert Foundation perceives a greater sense of solidarity among the population, too: "You notice that people are now doing their bit because everyone has realized that it's make or break." Along the way there was criticism he says, as well as signs of pandemic fatigue, "But now I get the impression that all the pressure and the awful spike in numbers over the past few weeks have pulled people together again."