Portugal appealed for help after a severe rise in COVID cases overwhelmed its hospitals. Germany is one of three countries sending assistance. 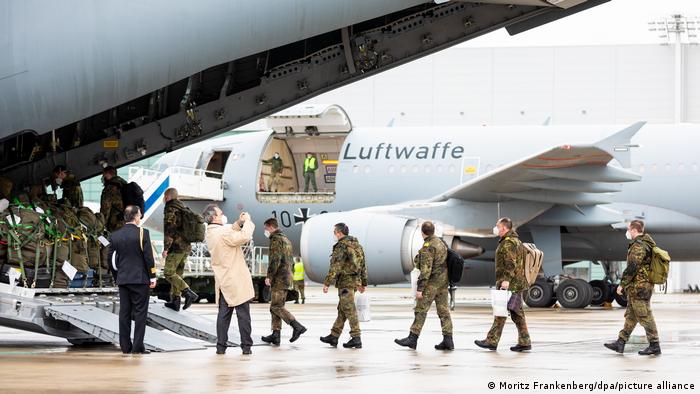 The team of doctors and nurses brought vital equipment with them

Portugal has appealed for help amid a devastating third wave of the coronavirus, with Prime Minister Antonio Costa saying the nation's hospitals are under "gigantic pressure."

According to some counts, Portugal has recorded more new infections and deaths relative to its population than any other country over the past two weeks. Nearly 13,000 people there have died from COVID-19, with nearly half of those deaths in January alone.

Portugal's hospitals have been unable to keep up with the pandemic, with lines of up to 30 ambulances seen outside some facilities in recent days. In one widely publicized case, a 46-year-old woman with COVID-19 was treated in an armchair for four days because no beds were available at the hospital in Vila Franca de Xira, near Lisbon.

According to the president of the Society of Internal Medicine, Joao Araujo Correia, Portugal has half the number of hospital beds per inhabitant than Germany.

'We have to stand together'

Berlin pledged to help by sending medics, field hospital beds and respiratory machines. On Wednesday, a team of 26 doctors and nurses boarded a Luftwaffe Airbus A400M plane, flying from Wunstorf, in northern Germany, headed for a civilian hospital in Lisbon.

The medical staff will spend three weeks helping treat critically ill COVID-19 patients, after which they will be relieved by another team.

"The situation there is incomparably more difficult than it is here with us. The hospitals are overflowing. And that's why we are needed there."

The pandemic can only be overcome through an international effort, said Baumgärtner, who was also flying to Portugal. One nation alone "can't handle this. We have to stand together."

The team was assembled over the weekend by the Rapid Response Medical Service Command in Leer, East Frisia. They are bringing 50 ventilators, 150 infusion devices and other material. Baumgärtner said that more capacity was clearly needed, but that they nonetheless hoped to provide some help.

The Portuguese ambassador to Germany, Francisco Ribeiro de Menezes, said his country was very grateful for the help during an extremely dramatic and difficult phase of the pandemic.

German Defense Minister Annegret Kramp-Karrenbauer earlier said Portugal is "in a particularly dramatic situation" and that "in such times, solidarity in Europe is indispensable."

Austria and Spain have also pledged to help their fellow EU member.

Portugal has appealed for help as its hospitals are overwhelmed. Meanwhile, an obscure plant-based antiviral drug has been found to be "highly effective" against COVID-19. Read on for all the latest COVID news.

Germany has again stepped in to prevent intensive care facilities in eastern France from being overwhelmed. The two countries have again reported record daily rises in cases. Follow DW for the latest.

Researchers in Germany have found that army sniffer dogs can discern between samples from coronavirus-infected and healthy patients. So high is the level of accuracy, they hope this can be used in real-life scenarios.