Denmark says it is developing a COVID-19 vaccine passport. Meanwhile, an obscure plant-based antiviral drug has been found to be "highly effective" against COVID-19. Read on for all the latest COVID news. 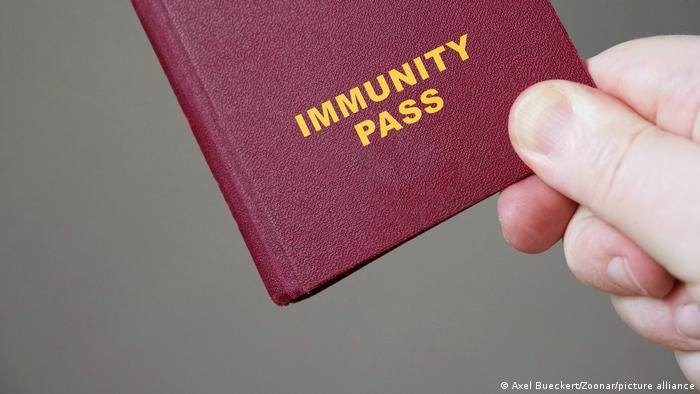 The idea of special privileges has inspired vigorous debate

Denmark said on Wednesday it will develop a digital coronavirus passport that would allow foreign travel and for restrictions to be eased.

The document, developed in conjunction with businesses, would show whether citizens have been vaccinated for the coronavirus or not, potentially affording them special travel privileges. It could also allow citizens to visit restaurants, conferences, music festivals and sports events.

From the end of February, people should be able to check their immunization status on a website, while the digital passport and an app will probably take another three to four months.

"It is absolutely crucial for us to be able to restart Danish society and that companies can get back on track. Many Danish companies are global companies," said Morten Bodskov, the country's acting finance minister.

"This is light at the end of the tunnel for very many companies," said Brian Mikkelsen, the head of the Danish Chamber of Commerce.

Denmark is currently under a lockdown, with nonessential retail closed, and bars and restaurants limited to takeaway.

The prospect of special privileges for vaccinated people— as well as efforts to develop a unified system for certifying vaccination — has stirred vigorous debate in the European Union.

The European Commission has been looking at proposals for vaccination certificates, but has said that, for now, such certificates would only be used for medical purposes.

Estonia has already announced that it will drop quarantine requirements for people who can prove they have been vaccinated with a certificate.

Read on for an overview of today's most important coronavirus stories from around the world.

Portugal:  German Bundeswehr medics have flown out to Portugal to assist the country's overwhelmed medical system. Portugal has appealed for help amid a devastating third wave, with Prime Minister Antonio Costa saying the nation's hospitals are under "gigantic pressure."

Doctor Ulrich Baumgärtner, the head of the military's medical service, said one nation alone "can't handle this. We have to stand together."

Germany: There have been 9,705 new infections reported in the past 24 hours, according to the Robert Koch Institute for infectious diseases. Numbers in Germany have gradually been coming down since new lockdown rules were implemented over December and January.

German Chancellor Angela Merkel said the incidence rate is now below 100, which is an improvement, but still some way from the target of 50 — at which point health authorities can more easily track chains of infection. She said 10 million people will have been vaccinated by the end of the first quarter.

France: French President Emmanuel Macron has promised the entire French adult public will be able to receive a coronavirus vaccine by the end of summer if they want it. He said vaccines will be manufactured at four locations in France from the end of February or the beginning of March.

The UK has now inoculated more than 10 million people with the first dose of the coronavirus vaccine. The country is only behind Israel and the United Arab Emirates in the number of doses delivered per 100 people. Britain is offering the vaccine to frontline health-workers, citizens older than 70 and to highly vulnerable groups.

Vaccine approval: European Commission chief Ursula von der Leyen has told lawmakers that vaccines from Russia and China could be approved if they share their data.

"If the Russian producers, the Chinese producers open their books, show transparency, show all the data ... then they could get ... a conditional market authorization like the other ones," von der Leyen said. So far, vaccines from BioNTech-Pfizer, Moderna and AstraZeneca have been approved for use across the bloc. The EU is currently in a supply row with AstraZeneca.

Romania: Schools and kindergartens will be partially reopened from Monday, with President Klaus Iohannis announcing that "most of the children" would receive in-person teaching from next week. Romania is one of the least-affected nations in the EU, with an official national incidence rate of 90.2 per 100,000 inhabitants.

New Zealand: The national medicines regulator has provisionally approved the BioNTech-Pfizer vaccine, as Prime Minister Jacinda Ardern warns against "vaccine nationalism." Ardern said the vaccines should arrive by the end of March, but said she was concerned about attempts to limit exports.

Some of the tennis players preparing for the Australian Open in Melbourne will have to go into quarantine after a worker of one of the tournament’s hotel tested positive for the coronavirus. Daniel Andrews, the premier of the Australian state of Victoria, urged the players and coaches who were quarantined at the Grand Hyatt hotel in Melbourne to isolate themselves untill they have a negative test.

Wuhan investigation: World Health Organization investigators have visited China's Wuhan Institute of Virology, as part of their search for the origins of the pandemic.

"Very interesting. Many questions," Danish team member Thea Fischer told reporters in response to a question on whether their three-and-a-half-hour visit had yielded results. Some skeptics of the theory that the virus originated from a wet market have pointed to the lab as the possible source of the outbreak, arguing — with scant evidence — that it was either manufactured there or was being studied and escaped.

Iran says it will receive more than 4 million doses of AstraZeneca’s coronavirus vaccine, with the delivery to start in February. The country is set to import the product through the COVAX scheme which aims to provide fair access of vaccines to middle and low income countries.

The United States' top infectious-disease expert, Dr. Anthony Fauci, urged the American public to avoid Super Bowl parties to prevent spread of the coronavirus. He stressed that big events such as the Sunday game are a cause for concern as people gather in large groups to watch the event together. He called on people to stay at home and lay low.

A Virginia university president apologized on Tuesday for organizing a campus-wide snowball fight over the weekend where dozens of participants were seen unmasked and not following coronavirus precautions.

"I messed up,'' Prevo said in the statement. "We did not think through or communicate the need to wear facial coverings and remain 6 feet (almost 2 meters) apart in compliance with Virginia Governor's Executive Orders for the suppression of the spread of COVID-19 or even our own COVID-19 Operations Plan. And the size of the group was not in compliance either.''

Latin America and the Caribbean: The region has topped 600,000 COVID-19 deaths, according one count. Brazil and Mexico are responsible for about half of the region's deaths. Many Latin American countries have suffered a more deadly second wave since December.

Mexico: The Federal Commission for the Protection against Sanitary Risks has given emergency approval for the Russian-made Sputnik V vaccine, making it possible to begin importing doses. A study has shown the vaccine is highly effective.

Mexico surpassed India last week to become the country with the third-highest official death toll from the pandemic.

Antiviral drug: An obscure plant-based antiviral drug is "highly effective" against COVID-19, a new study has shown. Researchers at the University of Nottingham found that thapsigargin "triggers a highly effective broad-spectrum host-centered antiviral innate immune response against three major types of human respiratory viruses," including SARS-CoV-2. Researchers said the findings are "hugely significant" but that more testing is needed.

Lasting antibodies: A major UK study has found that almost everyone who recovers from COVID-19 enjoys high levels of antibodies for at least six months, which should protect them from reinfection. The study measured levels of past COVID-19 infection in populations across Britain and how long antibodies persisted in those infected. Of the people who had previously tested positive for COVID-19, 99% retained antibodies for three months and 88% still had them after six months. The study is consistent with previous smaller studies.

New vaccines: German biotech firm CureVac has announced plans to develop a new vaccine with the potential to counter multi-variants, in conjunction with British pharmaceutical giant GlaxoSmithKline. "The development program will begin immediately, with the target of introducing the vaccine in 2022, subject to regulatory approval," a joint statement said.