A new mechanism would allow countries to halt exports of coronavirus vaccines that the EU says belong to its citizens. The World Health Organization has criticized the move. 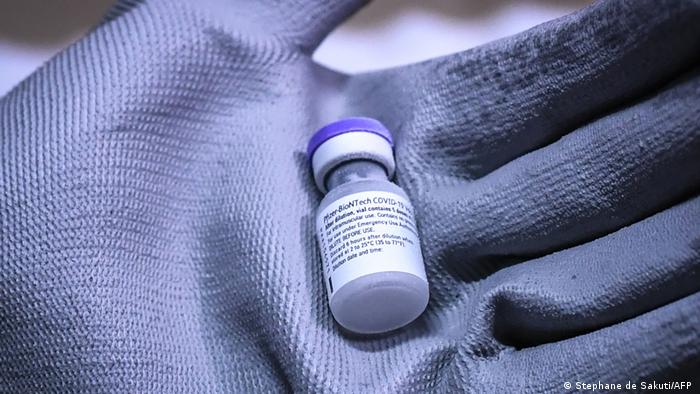 The European Commission launched a new mechanism on Friday to monitor and in some cases block coronavirus vaccine exports out of the bloc.

The move comes amid a row with the British-Swedish pharmaceutical giant AstraZeneca over vaccine deliveries.

The EU has voiced concerns that vaccine doses could be sent abroad before companies fulfill their obligations in the bloc.

Stella Kyriakides, the commissioner for health and food safety, said the EU is working with companies to ensure the vaccines are delivered.

"It depends on all parties living up to their contractual, social and moral responsibilities," she said.

The new mechanism is a transparency register that keeps track of which companies export vaccine doses to which countries.

Under the mechanism, national authorities can move to block the exports if they consider the company's commitments to the EU unfulfilled.

The plan only applies to coronavirus vaccines that were agreed upon in advance purchase agreements between pharma companies and the Commission.

Companies will need to apply for authorization to export the doses outside Europe, as well as showing their records for the past three months.

How is EU doing with vaccines?

How is the EU's promise of vaccine solidarity holding up?

A response to proposed exports is expected to be given within 48 hours, although the time could be extended.

The EU did include a list with dozens of exemptions to the new export rules.

Most European countries that are not members of the bloc are exempt from the new mechanism — including Norway, Switzerland, Serbia and others.

Israel, Syria, Jordan and other countries in the Middle East and northern Africa also made the list, as well as exports to 92 low and middle-income countries under the UN's vaccine distribution scheme.

However, the United Kingdom, which left the EU last year, is not exempt.

The UK expressed "concern" over the bloc's export control measures — saying the move violates the terms of its Brexit deal with the EU allowing for goods to flow across the Irish border.

The World Health Organization sharply criticized the move to stop exports, saying that limits on vaccine exports are not helpful at the current stage of the pandemic.

"It's a very worrying trend," said Mariangela Simao, WHO assistant director for access to medicines and health products.

"It is not helpful to have any country at this stage putting export bans or export barriers that will not allow for the free movement of the necessary ingredients that will make vaccines, diagnostics and other medicines available to all the world," she said.

The United Nations has urged for global solidarity in the distribution of vaccines, raising concerns that low-income countries could suffer greatly if wealthier nations hoard vaccines.

The European Union has given the green light to the Oxford-AstraZeneca COVID-19 vaccine, despite Germany's qualms about its effectiveness in seniors. The European Medicines Agency recommended the product for all adults.

Vaccination delivery delays have caused several countries in Europe to delay or even halt their vaccination programs. DW breaks down which areas have been hit the hardest.