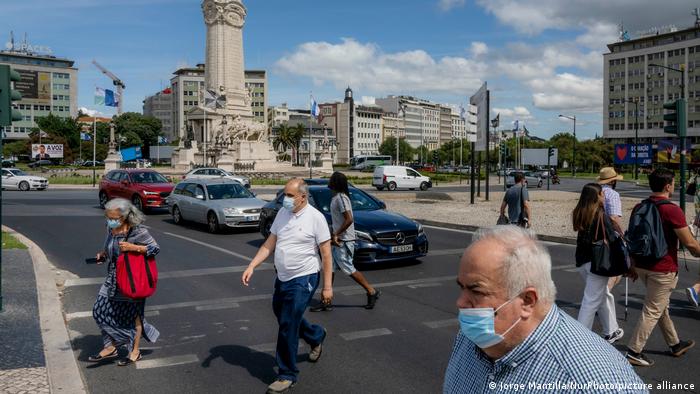 Portugal's government said it is monitoring the situation, but does not yet intend to re-implement mask mandates

Portugal is now a hotspot of coronavirus infections in Europe, the latest EU data showed on Thursday.

The omicron subvariant BA.5 is believed to be behind the spike, which is coming at a time when many tourists are traveling to the holiday hub after many pandemic curbs have been lifted.

Portugal logged an incidence rate of 1,295 new cases per 100,000 people over a seven-day period, according to data from the European Center for Disease Prevention and Control (ECDC).

Infections in the country far outpace those in neighboring Spain, which has a current incidence rate of 227, as well as Germany's 377, according to the ECDC.

Up to 90% of new infections in Portugal are due to the BA.5 subvariant, the country's public health institute said in a report on Tuesday.

Most coronavirus restrictions have been rolled back in Portugal, and nearly 90% of those eligible to get a jab against the virus have been vaccinated. The government said it would monitor the situation, but there are no current plans to reintroduce measures, such as requiring masks in indoor public spaces.

Spain: No more masks, but a rise in infections

In the United States, Pfizer and BioNTech are a major step closer to getting authorization for their COVID jab for children under 5 years of age.

The firms completed their filing with the US Food and Drug Administration (FDA). Their filing included data that three, lower-dose shots of their COVID jab produce a strong immune response in children as young as 6 months.

No coronavirus vaccine has yet been approved for children in the under 5 age group in most parts of the world.

Coronavirus deaths on the African continent are expected to drastically fall by the end of the year compared to 2021, the World Health Organization (WHO) said on Thursday.

Deaths are expected to fall nearly 94% by the end of 2022, WHO Africa director Matshidiso Moeti said at a press conference.

The UN health body said the drop in numbers is due to improved vaccination, better pandemic response, as well as natural immunity from prior infections.

Pharmaceutical firm Moderna said it would delay shipments of its COVID-19 vaccine to the European Union, as part of an agreement with the bloc.

Doses were originally scheduled to be delivered in the second quarter of the year, but will now be pushed back amid a drop in demand for COVID jabs and as countries gear up for potential booster campaigns in the fall.

Under the amended deal with Moderna, EU member-states will also get access to the company's next-generation vaccine targeting the original strain and the omicron variant.

Germany recorded 54,957 new cases and 91 new deaths in the last 24 hours, according to data from the Robert Koch Institute for infectious diseases. The total number of cases in Germany stands at 26,360,953 and deaths at 139,091.

The mayor of Munich said the 2022 Oktoberfest would happen either with no coronavirus restrictions or not at all.

Dieter Reiter told Bavaria's public broadcaster that he expected there to be an "unrestricted" festival, adding that "then we'll see what such a big event leads to — I hope not much."

The annual Oktoberfest, which generally hosts about 6 million visitors from around the world, was canceled for the last two years due to the coronavirus pandemic. The 2022 festival is scheduled to run from September 17 to October 3.

India recorded 3,712 new COVID-19 cases in the last 24 hours, the highest in nearly a month, the Health Ministry reported on Thursday.

The financial capital Mumbai accounted for the highest number of cases with 739 new confirmed infections — 96% of them asymptomatic — on Wednesday night.

That figure represents nearly double the number Mumbai reported just two days ago, which was 318. Hospitalizations were low and there was no need to worry, authorities added.

Maharashtra, home to Mumbai, was one of the worst states affected during the coronavirus surge in April and May 2021 in the country. India has recorded more than 43 million cases and 524,641 deaths since the pandemic began.

Japanese authorities on Thursday arrested a tax official for allegedly running a COVID-19 fraud scheme. Media reports say that the 24-year-old official and his friend were arrested because they may have stolen some $1.5 million from COVID-19 relief funds through fraudulent practices.

North Korea's state agency reported 96,610 new "fever" cases Thursday, accounting for a third consecutive official daily tally of fewer than 100,000 cases. The World Health Organization said it could not confirm whether suspected COVID-19 cases had actually dipped since it had no access to data.

Covid-19 Special - The pandemic through the eyes of artists