Passengers would still be required to wear masks on German flights even as the EU relaxed restrictions for travelers. Meanwhile, Kim Jong Un berated officials for North Korea's pandemic response. DW has the latest. 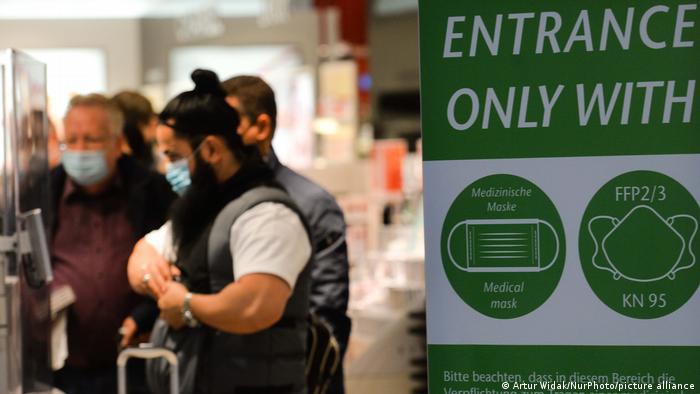 Germany said it had no plans to lift the mask mandate for flights despite the new EU guidance.

Last week, the European Union Aviation Safety Agency and the European Centre for Disease Prevention and Control said travelers would not be required to wear masks on European flights from Monday.

However, passengers flying to and from Germany would still be to wear masks during boarding, disembarking, and throughout the flight.

The German government said it no plans to scrap the mask requirement on planes, trains and buses in the near future.

Health Minister Karl Lauterbach (SPD) explained that, with the number of coronavirus cases still very high, "there is no scope to do without masks on public transport."

Kim "strongly criticized" officials for what he called a botched response to epidemic prevention, mainly a failure to keep pharmacies open round the clock to distribute medicine.

The worsening and largely undiagnosed COVID-19 crisis in North Korea has left nearly 1.2 million sick with fever and 50 dead since the country first announced the outbreak last week.

South Korea's President Yoon Suk-yeol has said that Seoul will spare no effort to help North Korea, as a COVID-19 outbreak batters the isolated nation.

"If North Korea responds (to our support), we will spare no medicines including COVID-19 vaccines, medical equipment and health personnel," Yoon said at the plenary session of the National Assembly on Monday,

The President  once again added that he will remain open for humanitarian aid.

Meanwhile in China, Shanghai is looking to resume normal life from June 1, a city official said on Monday.

The announcement came after it was declared that 15 of Shanghai's 16 districts had eliminated cases outside quarantine areas.

Deputy Mayor Zong Ming has given the clearest time frame yet of a return to normal for the city's 25 million people, who have been under a strict lockdown for over six weeks.

Shanghai officials said that the city's outbreak was under control.

However, they added that their aim until May 21 would be to prevent a rebound in infections, meaning many restrictions  will remain in place.

The European Commission said it has not made a final decision about the possible termination of a contract with Valneva to supply its COVID-19 vaccine.

Valneva said it had received a notice of intent from the Commission to terminate the contract to supply up to 60 million doses of vaccine.

The statement triggered a sell-off of the company's shares, which lost one-fifth of their value in few hours.

EU Commission spokesman Stefan de Keersmaecker said the final decision would only be made after consulting with Valneva.

The masks were introduced to help reduce the spread of COVID-19, but will no longer be mandatory in airports and on flights to Europe from next week onwards.