For almost a year, Slovakia has been ruled by a coalition that pledged to clean up the "mafia state." Its chaotic strategies during the coronavirus pandemic, however, have pushed the country into a healthcare emergency. 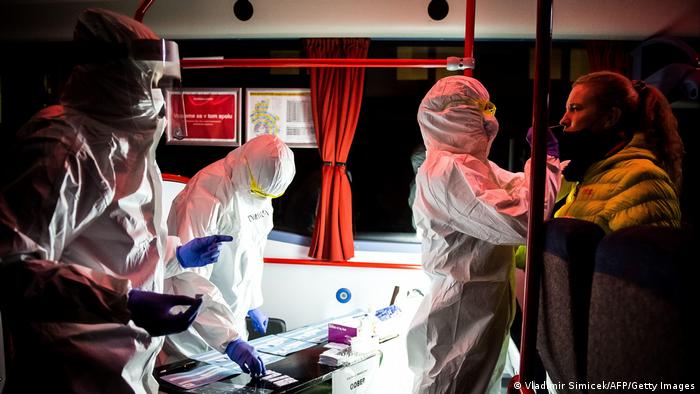 Despite employing widespread testing, Slovakia is losing the fight against the coronavirus pandemic as infection rates climb

The coalition wanted to clean up the "mafia state," to be a government for the people, to create justice and transparency. Just shy of a year ago, a coalition headed by Igor Matovic, an anti-corruption and political activist, came to power in Slovakia. It faced quite a challenge — dismantling former Prime Minister Robert Fico's corrupt, mafia-style system with its close ties between politics and organized crime. The coalition also took office in the middle of the first coronavirus lockdown.

The government's record is largely disappointing. As far as the coronavirus crisis is concerned, it has been downright disastrous: Slovakia is currently experiencing one of the worst health emergencies in Europe, largely due to the Matovic government's chaotic management. The country currently tops the list of European virus deaths per million inhabitants and patients hospitalized with COVID-19 in a 14-day period. In terms of infection rates, Slovakia at the moment ranks third in Europe after the Czech Republic and Estonia, according to official EU statistics.

"The government's record after eleven months in office is very mixed," says Grigorij Meseznikov, a political scientist at the Institute of Public Affairs (IVO) in Bratislava. "It can boast some successes in judicial reforms and the fight against corruption, but all in all, it is divided and has failed completely in the coronavirus pandemic." The government has shown a high level of incompetence and is prone to chaos, he added. 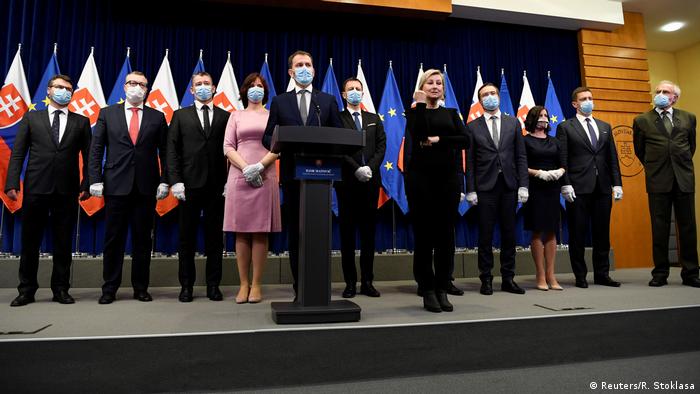 Initially, Slovakia seemed to be handling the coronavirus pandemic comparatively well. After a strict lockdown last spring, the economy and public life in the country of five million people soon returned to normal. In the fall, as the second wave loomed, Prime Minister Matovic decided on regular nationwide antigen testing to avoid another nationwide lockdown — against the advice of many experts. The tests were meant to show whether there were hotspots, and if so, where they occurred. The strategy failed miserably.

Meanwhile, the coronavirus crisis in Slovakia has spiraled out of control and the British virus mutation seems to be spreading at breakneck speed. Health officials complain of poor cooperation with authorities and point out that sometimes no systematic infection data is even available. It also seems compliance with general restrictions or quarantine measures for infected persons is hardly monitored.

Moreover, the government has been forced to turn to other EU countries for medical assistance because the coronavirus health emergency has aggravated Slovakia's drastic shortage of domestic health care personnel — the country is short an estimated 3,500 doctors and at least 10,000 nurses.

President Zuzana Caputova has urged the Matovic government to rethink its pandemic management, and she is not alone. The coalition itself, made up of four very heterogeneous parties — including Matovic's protest and anti-corruption movement OLANO (Ordinary People and Independent Personalities) and Economy Minister Richard Sulik's Eurosceptic right-wing libertarian Freedom and Solidarity (SaS) party — is embroiled in a bitter dispute.

Matovic blames the coronavirus disaster on Sulik, publicly calling him an "idiot" and claiming he blocked the lockdown for too long. Other coalition partners are calling for the resignation of Health Minister Marek Krajci, an OLANO party member. The coalition is currently at loggerheads over the purchase of Russia's Sputnik V vaccine, which — with the exception of Hungary — has not yet been approved in the EU. Matovic wants to use it but his coalition partners are strictly opposed.

The dispute over how to handle the pandemic is a reflection on the makeup of the coalition. Matovic is an eccentric and unpredictable personality: The 47-year-old often carries out his governing responsibilities on Facebook and almost constantly posts controversial, polarizing statements on his own private account. On Sunday, he used the third anniversary of the murder of investigative reporter Jan Kuciak as an opportunity to launch a general reckoning with Slovak journalists. Most of them are "superficial, biased, condescending and manipulative," he wrote, adding he has been "showered with hatred" by many editorial offices for the past eleven months.

"How can the prime minister attack reporters like that on the anniversary of the journalist's murder?" said Peter Bardy, the editor-in-chief of the portal aktuality.sk, where Kuciak worked. Bardy, who was friends with Kuciak, said he was stupefied by the comments made by a head of government who, after all, came to power because the voters wanted change: "This is not how we imagined the change in attitude toward journalists." In fact, Matovic's sound very much like ex-Prime Minister Fico at times.

The prime minister has a big ego, said Grigory Meseznikov. "He's not a team player and doesn't accept feedback on his policies, he waves off advice, criticizes everyone and everything but can't abide being criticized himself," the political scientist argued. The government is in a constant state of conflict, "not as much about programmatic issues but about personal animosities," Meseznikov said. 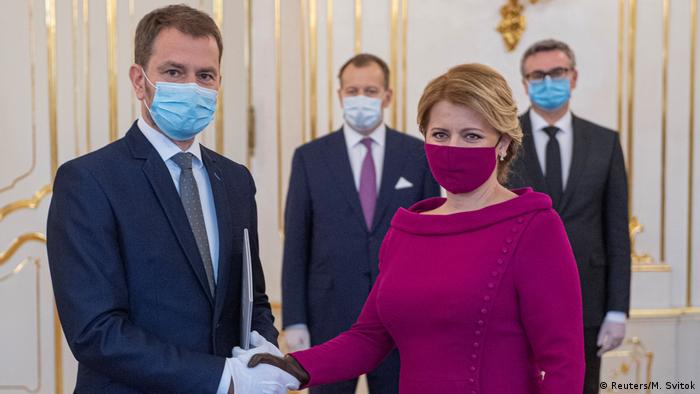 Coalition at a breaking point?

The coalition has at least taken one of its major election promises seriously: the fight against corruption and organized crime. The coalition has filled key posts in the judicial and police apparatus with independent individuals and authorities have so far been able to work unhindered and without politicians getting involved. The result: a spectacular series of arrests netting former high-ranking state officials and prominent businessmen representing the corruption that thrived under Robert Fico.

Even Fico was interrogated by police. The move was a clear signal that no one is untouchable any longer. Whether this will lead to fundamental changes in Slovakia remains to be seen. It is, however, to the government's credit that it reinstated basic rule-of-law mechanisms, said Meseznikov

But at this time, the people of Slovakia are worried first and foremost about the pandemic and its economic consequences. Because of its chaotic health management, the government's reputation has plummeted, the OLANO movement in particular has dropped in the polls, putting a breakup of the coalition within the realm of possibility. It would not be the first time that a reform experiment in Slovakia failed — in 2011, the government under liberal-conservative Iveta Radicova collapsed after just over a year in office.

Matovic would like to avoid that particular scenario. Perhaps that is why he changed tack on his Facebook page just a few days ago, inviting experts to join him in the search for answers to the pandemic and to "WIN TOGETHER" against the coronavirus.

Foreign Minister Ivan Korcok is one of six to step down after President Zuzana Caputova demanded the prime minister's resignation. The education minister also quit on Wednesday.

Slovakian PM Igor Matovic has said he is willing to resign — under certain conditions — to put the country's coalition chaos to a rest. Coalition partners have locked horns with Matovic over his COVID-19 management.

Slovakia, Greece and the Czech Republic have all moved toward limiting public life for people who have not been vaccinated against COVID. Follow DW for the latest.